You are here: Home › mathematics › Francois Viète and the Foundations of Algebra 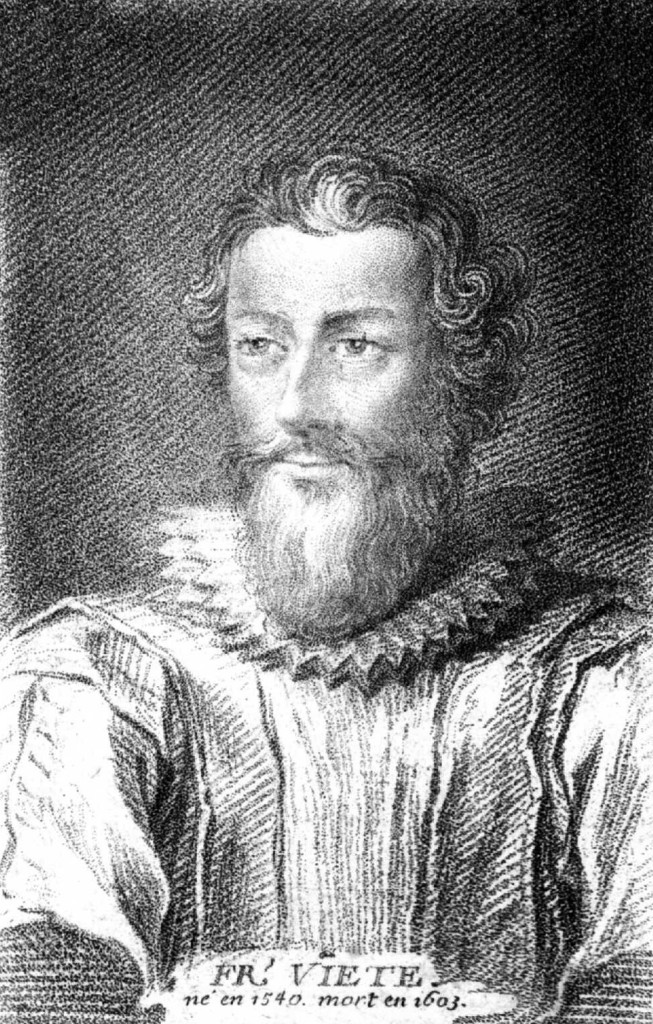 On February 23, 1603, French mathematician François Viète passed away. Viète‘s work on a  algebra was an important step towards modern algebra, due to its innovative use of letters as parameters in equations. He was a lawyer by trade, and served as a privy councillor to both Henry III and Henry IV.

Vieta was born at Fontenay-le-Comte, in western France about 50 km east of the coastal town of La Rochelle, to his father Etienne Viète, an attorney and a notary. He went to a Franciscan school and in 1558 studied law at the University of Poitiers, graduating as a Bachelor of Law in 1559. He began his career as an attorney in his native town. From the outset, he was entrusted with some major cases, including the settlement of rent in Poitou for the widow of King Francis I of France and looking after the interests of Mary, Queen of Scots. In 1564, Vieta entered the service of Antoinette d’Aubeterre, Lady Soubise, wife of Jean V de Parthenay-Soubise, one of the main Huguenot military leaders. He was employed to supervise the education of Soubise’s twelve year old daughter Catherine de Parthenay. He taught her science and mathematics and wrote for her numerous treatise on astronomy, geography and trigonometry, some of which have survived.

A Period of Political Unrest

This was a period of great political and religious unrest in France. Charles IX had become king of France in 1560 and shortly after, in 1562, the French Wars of Religion began. It is a gross over-simplification to say that these wars were between Protestants and Roman Catholics but fighting between the various factions would continue on and off until almost the end of the century. [1]

In 1568, Antoinette, Lady Soubise, married her daughter Catherine to Baron Charles de Quellenec and Vieta went with Lady Soubise to La Rochelle. In 1571, Viète enrolled as an attorney in Paris, and continued to visit his student Catherine. He began publishing his Universalium inspectionum ad canonem mathematicum liber singularis and wrote new mathematical research by night or during periods of leisure.

“These things which are new are wont in the beginning to be set forth rudely and formlessly and must then be polished and perfected in succeeding centuries. Behold, the art which I present is new, but in truth so old, so spoiled and defiled by the barbarians, that I considered it necessary, in order to introduce an entirely new form into it, to think out and publish a new vocabulary, having gotten rid of all its pseudo-technical terms…”
(Francois Viete, Introduction to In Artem Analyticam Isagoge, 1591))

In 1572, Vieta was in Paris during the St. Bartholomew’s Day massacre on August 23. This must have been an extremely difficult time for Viète for, although not active in the Protestant cause, he was a Huguenot himself. That night, Baron De Quellenec was killed after having tried to save Admiral Coligny the previous night. The same year, Vieta met Françoise de Rohan, Lady of Garnache, and became her adviser against Jacques, Duke of Nemours.

In 1573, he became a councillor of the Parliament of Brittany, at Rennes, and two years later, he obtained the agreement of Antoinette d’Aubeterre for the marriage of Catherine of Parthenay to Duke René de Rohan, Françoise’s brother. In 1576, Henri, Duc de Rohan took him under his special  protection, recommending him in 1580 as “maître des requêtes“. In 1579, Vieta printed his canonem mathematicum. In this tense atmosphere Viète was appointed by Henry III as royal privy counsellor on 25 March 1580, and he was attached to the parliament in Paris.[1]

Between 1583 and 1585, the League persuaded Henry III to release Vieta, Vieta having been accused of sympathy with the Protestant cause. Vieta retired to Fontenay and Beauvoir-sur-Mer, with François de Rohan. He spent four years devoted to mathematics, writing his “Analytical Art” or New Algebra. In 1589, Henry III took refuge in Blois. He commanded the royal officials to be at Tours before 15 April 1589. Vieta was one of the first who came back to Tours. He deciphered the secret letters of the Catholic League and other enemies of the king. Later, he had arguments with the classical scholar Joseph Juste Scaliger. Vieta triumphed against him in 1590.[5]

After the death of Henry III, Vieta became a Privy Councillor to Henry of Navarre, now Henry IV. He was appreciated by the king, who admired his mathematical talents. Vieta was given the position of councillor of the parlament at Tours. In 1590, Vieta discovered the key to a Spanish cipher, consisting of more than 500 characters, and this meant that all dispatches in that language which fell into the hands of the French could be easily read.

In 1593, Vieta published his arguments against Scaliger [5]. Three years later, Scaliger resumed his attacks from the University of Leyden. Vieta replied definitively the following year. That same year, Belgian mathematician Adriaan van Roomen sought the resolution, by any of Europe’s top mathematicians, to a polynomial equation of degree 45. King Henri IV received a snub from the Dutch ambassador, who claimed that there was no mathematician in France. He said it was simply because some Dutch mathematician, Adriaan van Roomen, had not asked any Frenchman to solve his problem. Vieta came, saw the problem, and, after leaning on a window for a few minutes, solved it. It was the equation between sin(x) and sin(x/45). He resolved this at once, and said he was able to give at the same time (actually the next day) the solution to the other 22 problems to the ambassador. “Ut legit, ut solvit,” he later said.

In 1598, Vieta was granted special leave. Henry IV, however, charged him to end the revolt of the Notaries, whom the King had ordered to pay back their fees. Sick and exhausted by work, he left the King’s service in December 1602 and died soon after in 1603.

The Foundations of Algebra

Vieta gave algebra a foundation as strong as in geometry. He then ended the algebra of procedures (al-Jabr and Muqabala), creating the first symbolic algebra. In doing so, he did not hesitate to say that with this new algebra, all problems could be solved (nullum non problema solvere). In his treatise In artem analyticam isagoge (Tours, 1591), Viète demonstrated the value of symbols introducing letters to represent unknowns. He suggested using letters as symbols for quantities, both known and unknown. He used vowels for the unknowns and consonants for known quantities. The convention where letters near the beginning of the alphabet represent known quantities while letters near the end represent unknown quantities was introduced later by Descartes in La Gèometrie.[6] This convention is used today, often without people realising that a convention is being used at all.[1] Thus he also used the signs + and -, first used by Johannes Widmann in a book in 1489, in his works. Previously, these had usually been written out as plus and minus in arithmetic operations. He also used the fraction bar as a symbol of division and the little word “in” as a fixed abbreviation of multiplication. Furthermore, Viète expressed the equality of two terms by the word “aequabitur” and thus invented the first equals sign. He also wrote related terms under each other and connected them with curly brackets.

His contribution to the theory of equations is De aequationum recognitione et emendatione (1615; Concerning the Recognition and Emendation of Equations), in which he presented methods for solving equations of second, third, and fourth degree. Viète knew the connection between the positive roots of an equation (which, in his time, were thought of as the only roots) and the coefficients of the different powers of the unknown quantity.[4] Viéte’s new systematic algebra opened doors for further mathematical development enabling his successors to express their thoughts mathematically with a higher degree of detail and precision.

Jeff Suzuki, Francois Viete and the Birth of Algebra, [11]