You are here: Home › astronomy › SN 1987A – The Best Studied Supernova of All Time 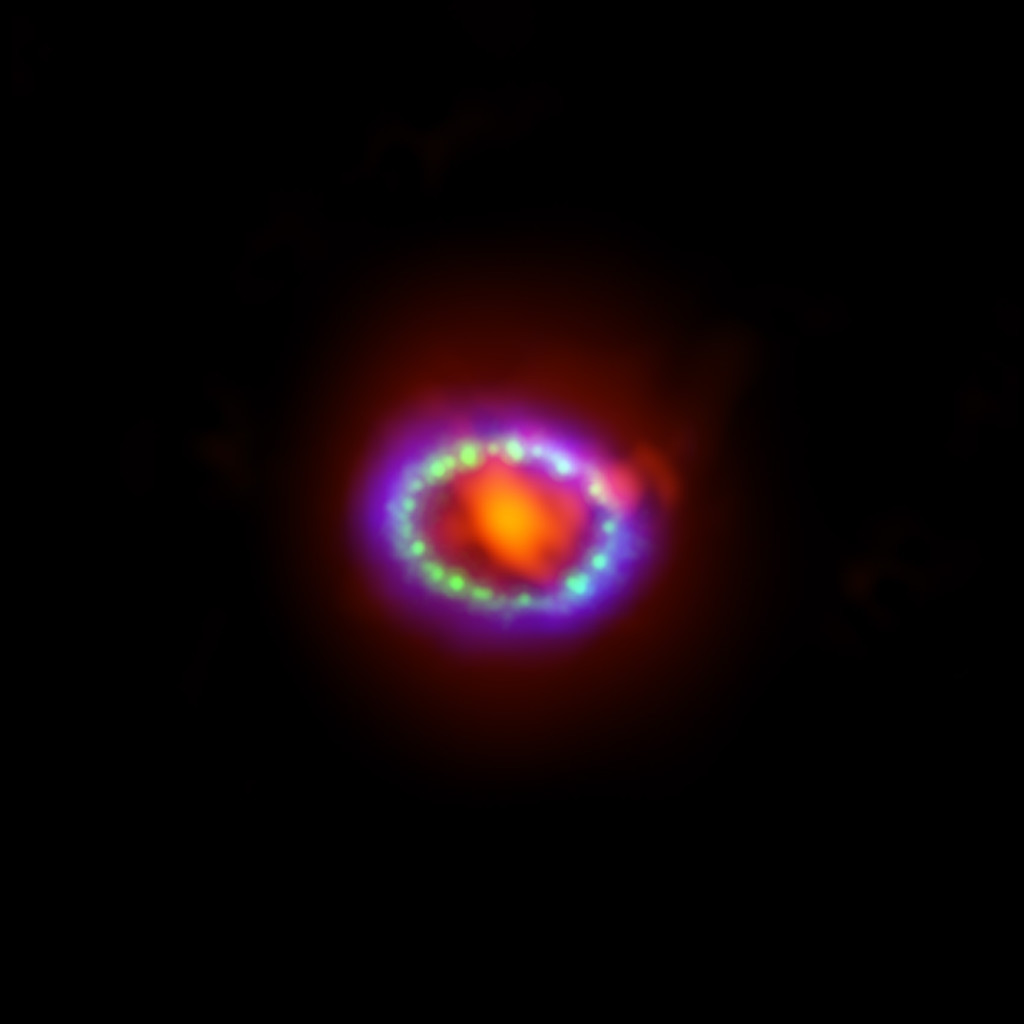 Remnant of SN 1987A seen in light overlays of different spectra. ALMA data (radio, in red) shows newly formed dust in the center of the remnant. Hubble (visible, in green) and Chandra (X-ray, in blue) data show the expanding shock wave

On February 24, 1987, SN 1987A, a supernova in the outskirts of the Tarantula Nebula in the Large Magellanic Cloud occurred visible to the naked eye. It was the closest observed supernova since Kepler’s Supernova  SN 1604, which occurred in the Milky Way itself.[5]

SN 1987A – The Best Studied Supernova of all Time

Due to the relative proximity to Earth, SN 1987A became one of the best studied supernovae of all time. After its discovery was announced, nearly every telescope in the southern hemisphere was able to observe the event. Not only light but also particle emission was detected. The Kamiokande II neutrino telescope is positioned in the Kamioka mine in Japan. It recorded the arrival of 9 neutrinos within an interval of 2 seconds and 3 more neutrinos 9 to 13 seconds later. Almost the same thing was detected by the IMB detector in a salt mine in Ohio. A third neutrino telescope in Russia also recorded the event. On Earth, a total of 25 neutrinos were detected out of several billions that were produced in the explosion. Neutrinos have the ability to travel through Earth’s entire diameter and are very hard to even detect. However, the detection of the neutrinos confirmed the theoretical expectations for the core collapse of a massive star. Further, scientists previously believed that explosions of massive stars occurred at their live’s end and the supernova of 1987 provided a confirmation for the theory.

A supernova (from Latin stella nova, super ‘new star, beyond’; plural supernovae) is the brief, bright illumination of a massive star at the end of its lifetime by an explosion that destroys the original star itself. The luminosity of the star increases millions to billions of times, and for a short time it becomes as bright as an entire galaxy. There are two basic mechanisms by which stars can become supernovae:

Well known supernovae are the 1987A supernova in the Large Magellanic Cloud discussed in this article, and Kepler’s supernova (1604). Especially the latter and Tycho Brahe‘s supernova (1572) have inspired astronomy,[6] as they have finally refuted the classical conception of the immutability of the fixed star sphere. The best known supernova remnant is the Crab Nebula (supernova 1054) in the constellation of Taurus.[7]

Scientist found out that SN 1987A appears to be a core-collapse supernova, which means that there should be a neutron star given the size of the original star. Indeed, the neutrino data indicate that a compact object did form at the star’s core, but it has not been detected so far. It could be also possible that the large amounts of material fell back on the neutron star, so that it further collapsed into a black hole. The star triggering the explosion with its core collapse was part of a triple star system. It was already classified before its demise by Nicholas Sanduleak in a directory of hot blue stars in the GMW. The collapsar is designated Sanduleak -69° 202 (Sk -69 202 for short) and possessed about 17 solar masses. Its apparent magnitude was 12.2 mag. Sk -69 202 ended its life as a so-called blue supergiant. Its age at the time of the explosion is estimated to be “only” about 20 million years. During this short life span it burned up its energy supply many times faster compared to the Sun, which is already about 5 billion years old.

Based on theoretical considerations it is assumed that the core collapse of Sk -69 202 led to the formation of a neutron star. But neither in the X-ray, radio, nor optical range a radiation source could be found at the location of the progenitor star. Also the search for a pulsed source, characteristic for a pulsar, was not successful. 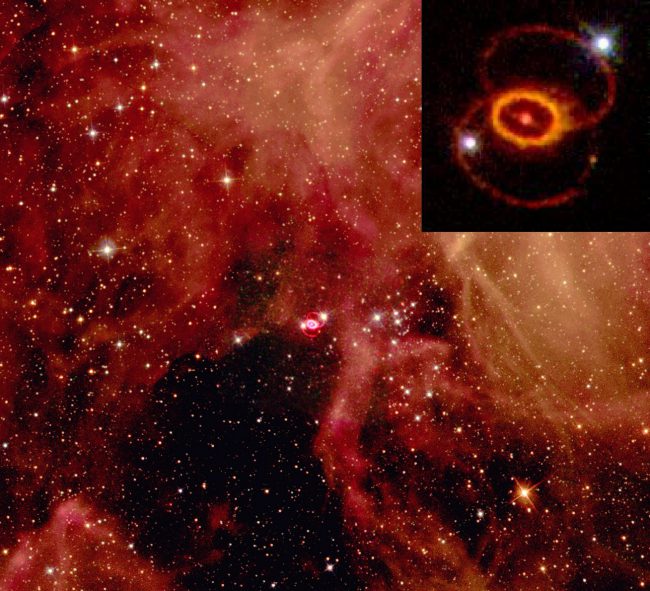 1987A supernova remnant near the center. Composite of two public domain NASA images taken from the Hubble Space Telescope. Edited with the GIMP. Uploaded to en:Wiki by en:User:Maveric149, CC-BY 4.0

Around SN 1987A there can be seen bright rings, material from the stellar wind of the progenitor. The rings were ionized by the ultraviolet flash from the supernova explosion, and consequently began emitting in various emission lines. That means that these rings were not visible until several months after the actual supernova and the process could be studied through spectroscopy. Around 2001, the expanding supernova ejecta collided with the inner ring, which caused its heating as well as generation of x-rays.

In June 2015, it was reported that images from the Hubble Space Telescope and the Very Large Telescope demonstrate the emissions from the matter making up the rings are fading as the clumps are destroyed by the shock wave. The ring will probably fade away between 2020 and 2030. As the shock wave passes the circumstellar ring it will trace the history of mass loss of the supernova’s progenitor and provide useful information for discriminating among various models for the progenitor of SN 1987A.