You are here: Home › history › The Assassination of a President 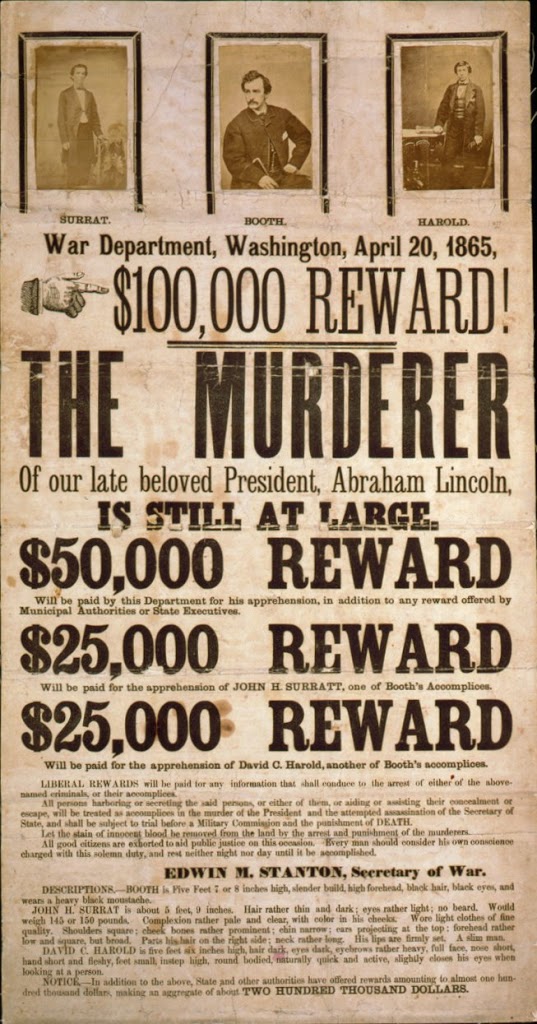 On Good Friday, April 14, 1865, as the American Civil War was drawing to a close, well known stage actor and Confederate spy John Wilkes Booth shot United States President Abraham Lincoln in the Presidential booth of the Ford’s theatre in Washington, D.C. And Lincoln should not be the last US president to be assassinated. He was followed by James A. Garfield, William McKinley, and John F. Kennedy, and if we also take attempts and plots into account, we will end up with more than 20 sitting or former presidents. But, Abraham Lincoln, as being the 16th president of the United States, was the first and besides Kennedy the most famous.

John Wilkes Booth was a well-known actor and a Confederate spy from Maryland; though he never joined the Confederate army, he had contacts with the Confederate secret service. In 1864, Booth formulated a plan  to kidnap Lincoln in exchange for the release of Confederate prisoners. But, the American Civil War was drawing to a close.

After attending an April 11, 1865, speech in which Lincoln promoted voting rights for blacks, furiously provoked Booth changed his plans and became determined to assassinate the president. It was only two days, after the Army of Northern Virginia, the main army of the Confederacy, under General Robert E. Lee surrendered to Lieutenant General Ulysses S. Grant and the Union Army of the Potomac at Appomatox Court House. Learning that the President, First Lady, and head Union general Ulysses S. Grant would be attending Ford’s Theatre in Washington, DC, Booth came up with a plan. His co-conspirators were Lewis Powell and David Herold, who should kill Secretary of State William H. Seward, and George Atzerodt who was to kill Vice President Andrew Johnson. By simultaneously eliminating the top three people in the administration, Booth and his co-conspirators hoped to sever the continuity of the United States government.

Our American Cousin and Ford’s Theater

Without his main bodyguard, Ward Hill Lamon, Lincoln left to attend the play Our American Cousin on April 14. General Grant together with his wife chose at the last minute to travel to Philadelphia instead of attending the play. John Parker, a police man serving as Lincoln’s bodyguard on that evening, left Ford’s Theater during intermission to join Lincoln’s coachman for drinks in the Star Saloon next door. It is unclear whether he ever returned to the theatre, but he was certainly not at his post when Booth entered the box. The now unguarded President sat in his state box in the balcony of Ford’s theatre. Seizing the opportunity, Booth crept up from behind and at about 10:13 pm, aimed at the back of Lincoln’s head and fired at point-blank range, mortally wounding the President.

Major Henry Rathbone, who was accompagning the president instead of General Grant momentarily grappled with Booth, but Booth stabbed him and escaped by jumping from the sill of the box down to the stage below yelling “Sic semper tyrannis!” the Virginia state motto, meaning “Thus always to tyrants“. An Army surgeon, Doctor Charles Leale, was sitting nearby at the theater and immediately assisted the President. He found the President unresponsive, barely breathing and with no detectable pulse. Having determined that the President had been shot in the head, and not stabbed in the shoulder as originally thought, he made an attempt to clear the blood clot, after which the President began to breathe more naturally again.The dying man was taken across the street to Petersen House. After being in a coma for nine hours, Lincoln died at 7:22 am on April 15.

After being on the run for 10 days, Booth was tracked down and found on a farm in Virginia, about 100 km south of Washington, D.C. After a brief fight with Union troops, Booth was killed by Sergeant Boston Corbett on April 26.

American President’s from the Prellinger’s Archive [5]