You are here: Home › biology › Félix d’Herelle and the Bacteriophages

On April 25, 1873, French-Canadian microbiologist Félix d’Herelle was born. D’Herelle was co-discoverer of bacteriophages (viruses that infect bacteria) and experimented with the possibility of phage therapy. D’Herelle has also been credited for his contributions to the larger concept of applied microbiology.

Félix D’Hérelle was born in Paris, France. He attended l’Ecole Monge (Lycée Condorcet) and then the Lycée Louis-le-Grand in Paris. His father, who was 30 years older than his mother, died when Félix was six years old. At the age of sixteen he travelled around Western Europe by bicycle, and after finishing school at seventeen he visited South America, then the rest of Europe and Turkey, where he met his future wife Marie Claire.Félix d’Herelle was a scientific autodidact. He began studying microbiology around the age of 24. He had just moved to Canada and began setting up his own laboratory, conducting first experiments. He then also earned a commission to study the fermentation and distillation of maple syrup to schnapps. D’Herelle’s first paper was published in 1901: “De la formation du carbone par les végétaux“. In it, the scientist demonstrates his profound scientific (self-taught) skills.

Together with his brother, he invested almost all his money in a chocolate factory that soon went bankrupt. When his money was almost used up and his second daughter was born, he signed a contract with the Guatemalan government, which hired him as a bacteriologist at the hospital in Guatemala City. As part of his job, Félix d’Herelle organized defenses against malaria and yellow fever. There, d’Herelle also studied local fungal infections of coffee plants and was given the task to explore how to make whiskey from bananas. In order to continue his work on fermentation, d’Herelle moved to Mexico and by 1909, he found a method to produce sisal schnapps. In 1911, D’Herelle moved to Paris and began working as an unpaid assistant in a lab at the Pasteur Institute. The scientist was able to increase his reputation. Back in South America, d’Herelle fought the Argentinian locust plagues with coccobacillus experiments.

Medicine for the Military

After the beginning of World War I, d’Herelle and his assistants probably produced more than 12 million doses of medicine for the allied military. However, one of the few available vaccines was the smallpox vaccine, developed by Edward Jenner and most treatments were based on mercury, strychnine, and cocaine. An initial remedy against bacterial infections was the arsenic-containing arsphenamine, which was mainly used for syphilis; it had strong side effects. 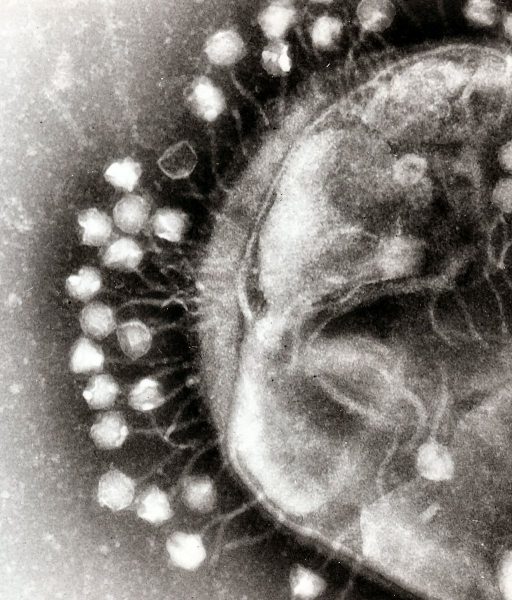 An electron micrograph of bacteriophages attached to a bacterial cell. These viruses are the size and shape of coliphage T1

How to kill a Bacteria

Already in 1896, Ernest Hanbury Hankin found out that in the waters of the Ganges and Yamuna rivers in India had marked antibacterial action against cholera and could pass through a very fine porcelain filter. The British bacteriologist Frederick Twort, back then superintendent of the Brown Institution of London, discovered a small agent that infected and killed bacteria. According to Twort, the agent must be either a stage in the life cycle of the bacteria, an enzyme produced by the bacteria themselves, or a virus that grew on and destroyed the bacteria. However, due to the outbreak of World War I and the shortage of research funds, the scientist‘s work was interrupted.

Independently from Twort, Félix d’Hérelle found and announced in 1917 that he had discovered “an invisible, antagonistic microbe of the dysentery bacillus“. Instantly, d’Hérelle understood: “what caused my clear spots was in fact an invisible microbe … a virus parasitic on bacteria“. He named the virus a bacteriophage or bacteria-eater. Félix d’Herelle is also credited with introducing the phage therapy, the therapeutic use of bacteriophages to treat pathogenic bacterial infections. The isolation of phages by d’Hérelle was carried out as follows:

In the spring of 1919, d’Hérelle isolated phages from chicken feces and successfully treated a form of chicken typhoid fever. These successful experiments on animals encouraged d’Hérelle to try similar treatments on humans. In August 1919, the first patient was cured with d’Hérelle’s bacteriophage therapy.  At that time, however, nobody knew anything about the existence of bacteriophages. At the same time, the German microbiologist Philalethes Kuhn also developed a theory on the existence of bacterial parasites, which he referred to as Pettenkoferies. He regarded d’Hérelle’s results as a special case of these parasites. However, as was later shown, his observations were only based on changes in the shape of the cultivated bacteria and not on the existence of a bacterial parasite. Only after Ernst Ruska had constructed the transmission electron microscope in 1931,[7] his brother Helmut Ruska was able to observe bacteriophages in 1939. D’Hérelle suspected that they reproduced by somehow “eating” the bacteria. This idea was later confirmed in principle.

Félix d’Hérelle was stricken with pancreatic cancer and died a forgotten man in Paris in 1949. In the 1960s Félix d’Hérelle’s name appeared on a list published by the Nobel Foundation of scientists who had been worthy of receiving the Nobel Prize but did not, for one reason or another. D’Herelle was nominated for the prize ten times.