You are here: Home › engineering › Ernst Ruska and the Electron Microscope 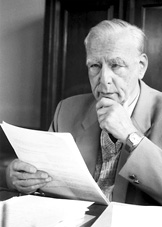 On March 9, 1931, German physicist Ernst Ruska together with his doctoral advisor Max Knoll presented the very first prototype electron microscope, capable of four-hundred-power magnification; the apparatus was the first demonstration of the principles of electron microscopy.

Ernst Ruska was born on 25 December 1906 in Heidelberg as the fifth of seven children of Julius Ruska, professor of oriental studies, and his wife Elisabeth Ruska, née Merx. After graduating from grammar school in Heidelberg in 1925, he studied electronics at the Technical College in Munich and continued two years later in Berlin including a practical training from Brown-Boveri & Co. in Mannheim and Siemens & Halske Ltd. in Berlin.

The Invention of the Electron Microscope

Under the direct tutelage of Dr. Max Knoll and together with other doctoral students Ernst Ruska worked on the development of a high performance cathode ray oscilloscope. But, his major research achievement was the construction of microscopes using electrons, with wavelengths 1000 times shorter than those of light, which could provide a more detailed picture of an object than a microscope utilizing light, in which magnification is limited by the size of the wavelengths. In 1931, Ernst Ruska demonstrated that a magnetic coil could act as an electron lens, and used several coils in a series to build the first electron microscope in 1933, when he finished his PhD in electrical engineering with a thesis On a magnetic objective for the electron microscope. 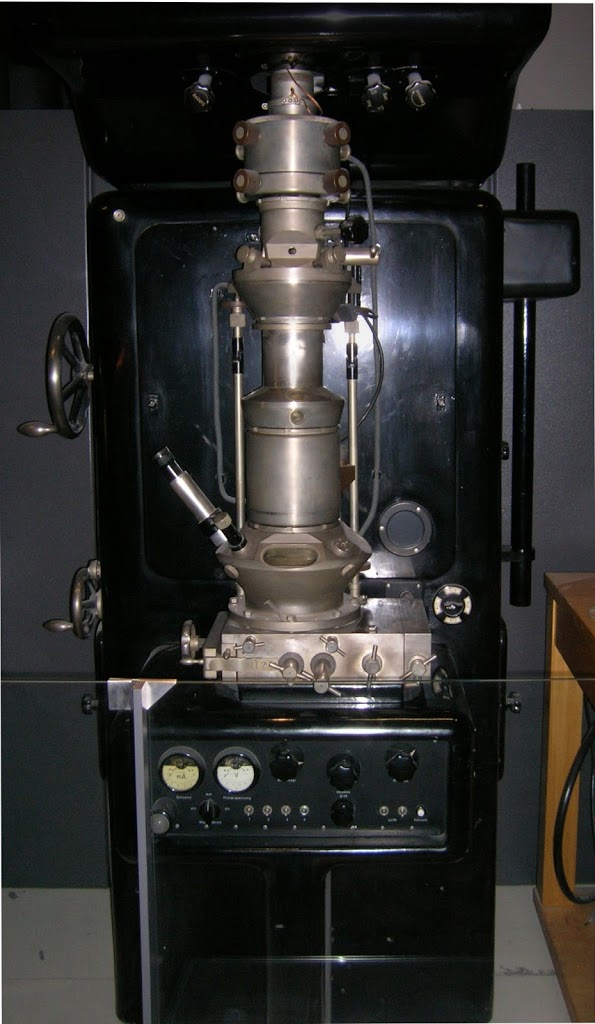 Prior to Ruska’s invention of the electron microscope in 1931, microscopy was limited by the inability of existing microscopes to see features smaller than the wavelength of visible light. The conception that it was possible to construct a microscope that used electrons instead of light was first realized when Ruska was able to build a short-focus magnetic lens using a magnetic coil. On March 9, 1931, he and Max Knoll succeeded in achieving the first two-stage electron-optical magnification with magnetic lenses, thus implementing the basic technical principle of the electron microscope. It was based on the fact that magnetic fields could deflect electrons because of their charge and that electron beams could be bundled and focused in the same way as light beams through lenses and was at the time called “over-microscope”. Since the wavelengths of electrons are considerably shorter than those of light, electron microscopes provide much better resolution than optical microscopes.

The much more powerful version, which Ruska developed in 1933 was able to magnifications of ten times higher than existing light microscopes, i.e. a magnification of more than 12,000 times. Ruska’s electron microscope was able to capture an image made by a focused beam of electrons passing through a thinslice of metalized material, which could be viewed on a fluorescent screen. Together with his brother-in-law, the engineer Bodo von Borries, he further developed the device so that it could be mass-produced from 1938/39.

The Institute for Electron Microscopy

During this period Ruska also was employed by the Fernseh Corporation in Berlin, where he worked to develop television tube technology, followed by an employment at Siemens as an electrical engineer. In 1944 Ruska earned his habilitation at the Technical University of Berlin. After the war, he rebuilt the Laboratory for Electron Optics at Siemens. As well as developing the technology of electron microscopy, Ruska also worked at other scientific institutions, and encouraged Siemens to set up a laboratory for visiting researchers, which was initially headed by Ruska’s brother Helmut, a medical doctor who developed the use of the electron microscope for medical and biological applications. In 1949 he was also appointed professor at the Free University of Berlin, and from 1959 he also taught at the TU Berlin.  After leaving Siemens in 1955, Ruska served as director of the Max Planck Society’s Institute for Electron Microscopy of the Fritz Haber Institute until 1974. Concurrently, he took a professorship at Technical University of Berlin in electron optics and electron microscopy from 1957 until his retirement in 1974.[2]

The Scanning Electron Microscope and the Nobel Prize

In 1981 German physicists Gerd Binnig and Heinrich Rohrer developed Ruska’s concept further by using a beam of electrons to scan the surface of a specimen rather than to penetrate it. A recording of the current generated by the intermingling of electrons emitted from both the beam and specimen is used to build a contour map of the surface. This “scanning electron microscope” complements rather than competes against the transmission microscope developed by Ruska. Therefore, Ruska, Binning and Rohrer shared the 1986 Nobel Prize in physics.