You are here: Home › physics › Emil Jannings and the Very First Academy Award 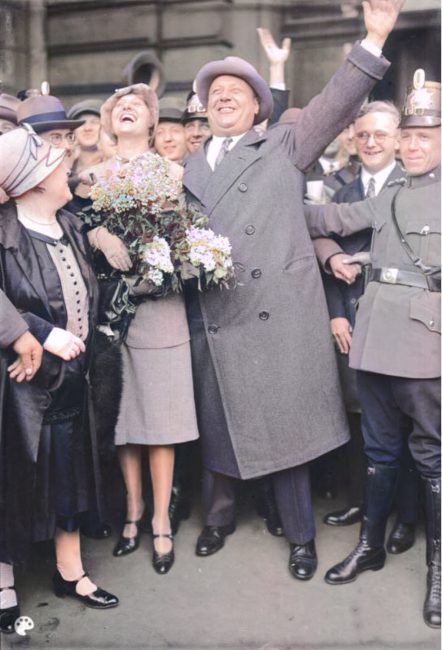 On July 23, 1884, German actor Emil Jannings was born. Jannings is best known for his collaborations with F. W. Murnau [2] and Josef von Sternberg, including 1930’s The Blue Angel, with Marlene Dietrich. He was the first Oscar recipient, honored with the Academy Award for Best Actor at the 1929 ceremony. Jannings is the only German ever to have won that award.

“We can only realize the shadows of our dreams.”
– Emil Jannings

Emil Jannings was born in Rorschach on Lake Constance, Switzerland, as the son of the US merchant Emil Janenz and his wife Margarethe (née Schwabe), a migrant of German-Russian descent from Germany. He grew up as a German citizen in Switzerland as well as in Leipzig and Görlitz. After he left grammar school without a degree and his mother initially forbade him to become an actor, he went to sea as a ship’s boy for a year. After his return to Görlitz she allowed him to start an acting traineeship at the Görlitz Theatre. But there he was certified as lacking talent. However, Jannings was not discouraged by this. He joined several travelling theatres and travelled with them between 1901 and 1908 through the whole German-speaking area. His first real engagement he got afterwards at the Stadttheater Glogau, Lower Silesia. Further engagements at different municipal theatres followed. In 1915 he came to Berlin where he played at nearly all stages with great success.

Finally he signed a contract with the Deutsches Theater in Berlin where he distinguished himself as a character actor under the direction of Max Reinhardt.[1] Through Reinhardt Jannings also met Karl Gustav Vollmoeller in 1915. Jannings was also an acting colleague of Ernst Lubitsch.[3] Both belonged to the Berlin society of the Roaring Twenties. In 1918 he played the village judge Adam in Heinrich von Kleist‘s Der zerbrochne Krug (The Broken Jug) at the Königliches Schauspielhaus in Berlin. With this role portrait Jannings celebrated one of his greatest stage successes.

Emil Jannings didn’t see his fulfilment in the early film work. Artistically it wasn’t an adequate medium for his acting because he couldn’t use his versatile voice in the silent movie. First he had his first film role in the movie Im Schützengraben (In the Trenches) directed by Walter Schmidthässler. After that he played year after year in numerous movies of the expanding UFA, which opened a welcome source of money for him. From 1919 Jannings also began to achieve international fame. He shot a series of historical dramas, often directed by Ernst Lubitsch, with Pola Negri playing the female lead, for example in The Eyes of Mummy Ma and especially Madame Dubarry. Moreover Jannings gained recognition by impersonating well-known stage characters like Othello, Tartüffe or Danton. He played best as a long-suffering man who is pursued by misfortune and dies tragically at the end: The Last Command (Der letzte Mann, 1928) and Variety helped him to the title of Best Actor in the World and to a lucrative contract with Paramount, where Lubitsch and Negri were already working. 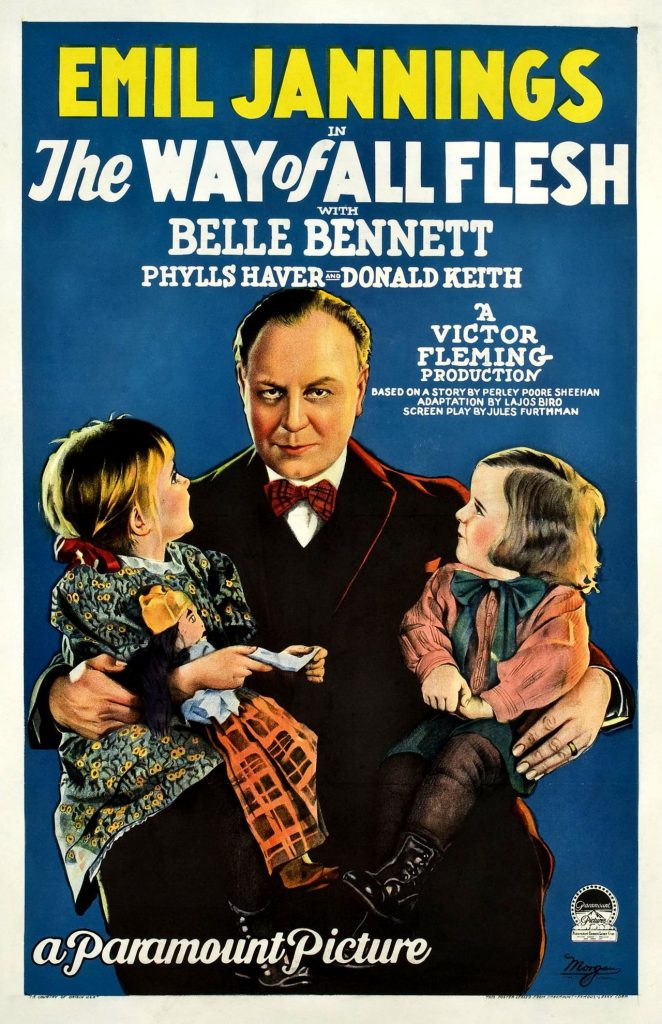 Poster for the American drama film The Way of All Flesh (1927), featuring Emil Jannings

In the United States

As in Germany, Jannings was mostly shown in America as a man who is drawn to ruin by circumstances and sinful women. Already his first film in America, The Way of All Flesh, directed by Victor Fleming, became the model for all further movies. The film had great financial success. The following year, Jannings starred in The Last Command. Josef von Sternberg had an influence on him that Jannings acted with a controlled performance in front of the camera. Jannings was reluctant to use this kind of acting. The resulting differences of opinion culminated in stormy arguments between the star and his director. After The Street of Sin had found no approval from critics or audience, Ernst Lubitsch took over the direction of The Patriot. In this film Jannings portrayed the mad Tsar Paul I, who is murdered for the better of Russia by Lewis Stone, the patriot of the title, at the end. 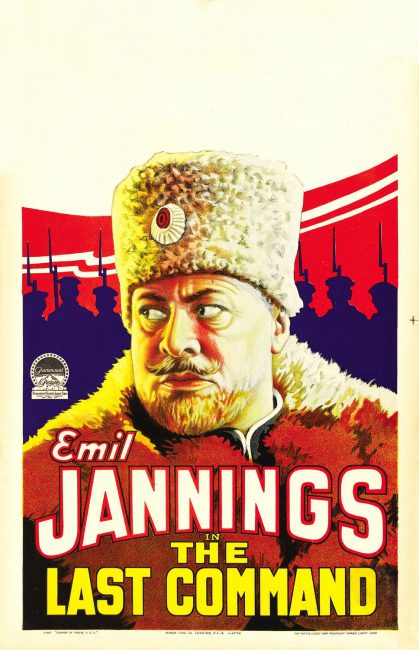 Jannings was not very happy in America because he missed the stage work. But he became friends with Greta Garbo among others, and he acquired a big fortune of which he hid more than 200.000 dollars in cash in his pillow. This is why he was one of the few stars who was not affected by the stock market crash. Jannings won an Oscar in 1929 as the first actor for his performance in the two movies The Way of All Flesh and The Last Command. But with the change from the silent movie to the sound film the public taste changed rapidly and Jannings’ rather exalted way of acting was soon regarded as outdated. Moreover, his Hollywood career came to an end with his thick German accent that was difficult to understand. Therefore he and his wife returned to Germany in the middle of the year 1929. 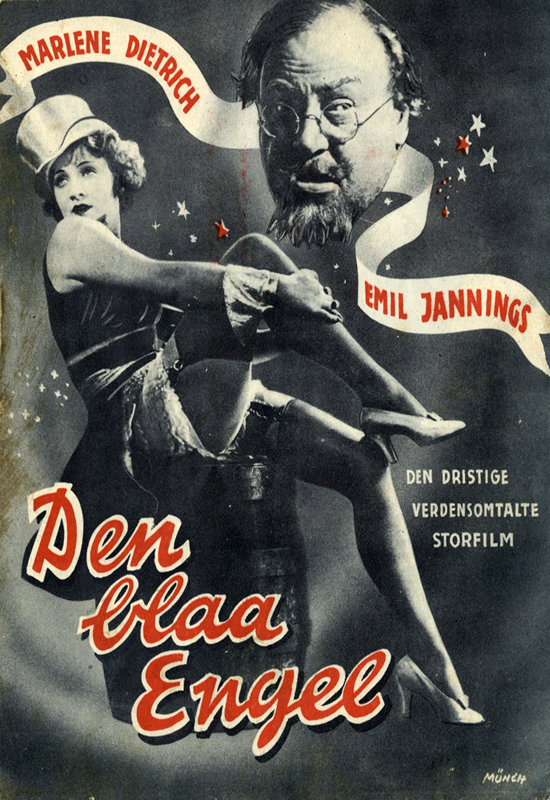 Immediately afterwards he had his sound film debut under the direction of Josef von Sternberg in Der blaue Engel (The Blue Angel) together with Marlene Dietrich. The renewed cooperation of the two quarrelsome men was due to the common friendship of actor and director with Vollmoeller who was the leader of the script team. Jannings was again to be seen as a suffering man who in the end perishes because of his own greed. But the star of the movie was Marlene Dietrich who had already shot a number of movies but never had such a demanding role. Jannings also shot the English version of the movie. In the following year he shot the movie Liebling der Götter (Favorite of the Gods, 1930) at Renate Müller’s side.

After 1933 Jannings took part beside some other movies also in the Nazi propaganda movie Ohm Krüger; beside the leading role he also had the artistic direction, which was not few critics resented him. His films from this time did not show the level of his earlier works, especially his performance in Der zerbrochene Krug (The Broken Jug, 1937) seemed more like a filmed stage performance and left a static impression on the viewer.  Jannings could not complete his last film Wo ist Herr Belling? (Where is Mr Belling?, 1945) in 1945, because the Allies immediately imposed a lifelong ban on the actor after the end of World War II. His proximity to the National Socialist rulers served as a reason.

Emil Jannings died of liver cancer in 1950 in his house in Sankt Wolfgang in the Salzkammergut, Austria, at age 65.