You are here: Home › cinematography › Ernst Lubitsch and the ‘Lubitsch Touch’ 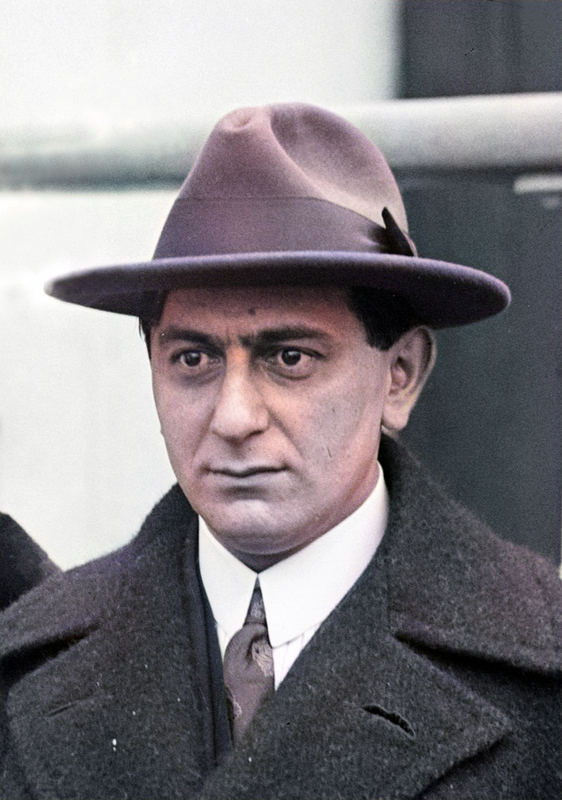 On January 28, 1892, German American actor, screenwriter, producer and film director Ernst Lubitsch was born. His urbane comedies of manners gave him the reputation of being Hollywood‘s most elegant and sophisticated director.

“I let the audience use their imaginations. Can I help it if they misconstrue my suggestions?”
– Ernst Lubitsch, as quoted in [8]

Ernst Lubitsch was born in Berlin and was apprenticed as a merchant. However, the son of a fashion designer and tailor quickly became the student of Max Reinhardt. Reinhardt was back then an important an influential person and the artistic director of the German Theater in Berlin. Lubitsch started out with small plays and cabaret shows before becoming an actor at bigger theater stages in Berlin. After acting in several movie productions, Lubitsch started directing his own films and made his mark as a serious director in 1918 with ‘The Eyes of the Mummy‘. In this period, Lubitsch began filming historical dramas, comedies as well as short films, earning a great reputation internationally. In 1921, Lubitsch’s films were selected in the list of the 15 most important movies by the New York Times. In the same year, Lubitsch sailed to the United States in order to explore the American film industry. Even though he was not received very gladly, Lubitsch decided to leave Germany for Hollywood one year after.

Lubitsch’s first Hollywood productions were a critical and a commercial success and he was able to sign a three-year, six-picture contract with Warner Brothers that guaranteed the director his choice of both cast and crew, and full editing control over the final cut. However, the financial success for the film company decreased and Lubitsch’s contract was dissolved early. His prestige rose rapidly, and in 1927 Irving Thalberg entrusted his wife Norma Shearer to him for the film The Student Prince in Old Heidelberg, an opulent adaptation of the operetta The Student Prince. Two years later, with Camilla Horn and John Barrymore, Lubitsch filmed the romantic adventure novel The King of Bernina. In 1929 Lubitsch became the most famous director in Hollywood when he not only made a star out of Maurice Chevalier with the musical The Love Parade but also knew how to use the innovation of the sound film in an optimal way. The film Monte Carlo from the following year contained many technical innovations that permanently improved the handling of sound technology.

Excursions into the dramatic subject were not accepted by critics and audiences, and the failure of the war drama Broken Lullaby / The Man I Killed, which starred Nancy Carroll and Phillips Holmes in 1932, convinced the director to only shoot comedies in the future. Still, Lubitsch was appointed Paramount’s production manager in 1935 and ran the largest Hollywood studios at the time. Lubitsch twice tried to bring Marlene Dietrich, whose career had been stagnating since the middle of the decade, back into the audience’s favor. If the comedy Desire, whose production Lubitsch closely supervised, was still reasonably successful in 1936, the failure of Angel from the following year convinced those responsible at Paramount to dismiss Marlene Dietrich from her contract. Lubitsch not only directed his own films, but increasingly supervised other directors as well. This time, the German film maker had troubles overseeing all of the sixty different films and got fired. Lubitsch decided to devote his life completely to full-time movie making and became a citizen of the United States in 1936.

“Nobody should try to play comedy unless they have a circus going on inside.”
.- Ernst Lubitsch, as quoted in [8]

In 1939, Lubitsch moved to MGM, and directed Greta Garbo in Ninotchka. Garbo and Lubitsch were friendly and had hoped to work together on a movie for years, but this would be their only project. The film, co-written by Billy Wilder,[6] is a satirical comedy in which the famously serious actress’ laughing scene was heavily promoted by studio publicists with the tagline “Garbo Laughs!” Garbo was nominated for the Oscar and one critic said succinctly about the film’s chances of success in Russia: Stalin won’t like it.

To Be or Not to Be

In 1940, he released one of his most famous movies, ‘The Shop Around the Corner‘. The movie starred James Stewart, Margaret Sullavan as well as Frank Morgan and ranked #28 on AFI’s 100 Years… 100 Passions, and is listed in Time’s All-Time 100 Movies. During his last active years as a director, Lubitsch worked at 20th Century Fox and it has been claimed that the last picture made by the director with his distinctive “touch” was ‘Heaven Can Wait‘, released in 1943. After Lubitsch satirized communism in Ninotschka, now he tried to kill the Nazis by ridicule. In 1942 Lubitsch directed hiss most famous film to this day, the Nazi parody To Be or Not To Be  inspired by the drama Poland is not yet lost by Melchior Lengyel. The leading actress Carole Lombard died shortly before the premiere in a plane crash. The New York Times was critical: As it is, one has the strange feeling that Mr. Lubitsch is a Nero, fiddling while Rome burns.

How would Lubitsch Do it?

“In Hollywood we acquire the finest novels in order to smell the leather bindings.”
– Ernst Lubitsch, as quoted in [8]

In 1945 Lubitsch suffered a heart attack during the shooting of A Royal Scandal, from which he never fully recovered. In March 1947, Lubitsch was awarded a Special Academy Award for his “25-year contribution to motion pictures”. Presenter Mervyn LeRoy, calling Lubitsch “a master of innuendo“, described some of his attributes as a filmmaking: “He had an adult mind and a hatred of saying things the obvious way.”

Lubitsch died of a heart attack on November 30, 1947 in Hollywood. His last film, That Lady in Ermine with Betty Grable, was completed by Otto Preminger and released posthumously in 1948. Leaving Lubitsch’s funeral, famous director Billy Wilder ruefully said, “No more Lubitsch.” William Wyler responded, “Worse than that. No more Lubitsch pictures.” Wilder had a sign over his office door, which read “How would Lubitsch do it?” [6]

Lubitsch was known as an autocratic director who left his actors little room for interpretation. Both Mary Pickford and his fellow directors Josef von Sternberg and Clarence Brown thought that the actors would play Lubitsch on the big screen instead of putting their own personality in the foreground. Many of his films were also characterized by the fact that Lubitsch left certain processes and events in his films to the imagination. Lubitsch said:

“Every good film is filled with secrets. If a director doesn’t leave a few things unsaid, it’s a lousy movie. (…) A film is good when it is mysterious, with unsaid things.”