You are here: Home › literature › The Emanzipation of Dorothea von Schlegel 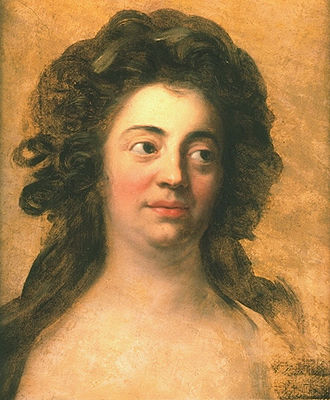 On October 24, 1764, German novelist and translator Dorothea von Schlegel was born as Brendel Mendelssohn. The daughter of famous philosopher of the enlightenment Moses Mendelsohn, she met the poet, critic, and future husband Friedrich von Schlegel in the salon of her friend Henriette Herz. It was also in Herz‘s salon, where she met European scholars such as e.g. Wilhelm and Alexander von Humboldt.

Dorothea von Schlegel was born in Berlin, Germany, as the oldest daughter of the philosopher Moses Mendelssohn, a leading figure in the German Enlightenment. Little is known about the content of their education, unlike their brothers. Her literary work suggests extensive literature studies and a good knowledge of French.[1] At the age of 14, she was engaged in 1778 to the ten year older merchant Simon Veit, whom she married on April 30, 1783 at the age of 18. The merchant and banker Simon Veit is considered to be an efficient, generous man, but he was not intellectually equal to his wife. In the salon of her friend Henriette Herz she met the young Friedrich Schlegel in July 1797. He was then an attractive and accomplished young man of twenty-five. Although his family intended him to become a banker, he disdained commerce and was fast making his name as a literary critic and theorist. His older brother August Wilhelm was an influential professor at the University of Jena.[3]

Concubinage and Marriage with Friedrich Schlegel

As a result, she divorced on 11 January 1799 through a Rabbinat Court, committing herself not to remarry, not to be baptized and not to persuade her children to convert to Christianity. Afterwards she lived freely and publicly together with Friedrich Schlegel. She moved with him, his brother August Wilhelm Schlegel and his wife Caroline to Jena, where Novalis,[5] Ludwig Tieck and Friedrich Schelling, a centre of literary romance, established themselves as a living and working community. Friedrich Schlegel’s novel Lucinde (1799) was seen as an account of their affair, causing a scandal in German literary circles. Dorothea and Friedrich moved in Paris in 1802, hoping to find intellectual fulfillment and a secure income. Since the secure income continued to prove elusive, she began editing volumes of medieval French texts, all published under his name. A year later, on April 6, 1804, Dorothea became a Protestant and she and Friedrich married.[3]

Dorothea Schlegel’s writing production almost entirely falls into the period from 1799-1808, the time from the separation of her first marriage to conversion to Catholicism. But because she never signed her writings with her own name, she gained little recognition during her lifetime. Moreover, her life story attracted more attention than her work.[3] Her first writings are reviews for the magazine “Athenaeum” published by Schlegel. In 1801 her novel “Florentin” was published, like all following works anonymously and edited by Friedrich Schlegel. During her stay in Paris, she began to work with French translations, which make up the greater part of her work, partly to finance herself and her husband. She had the greatest success with the translation of the novel “Corinne” by Madame de Staël in 1807.

In 1808, Friedrich and Dorothea converted to Catholicism. Actually, she may have adopted the name “Dorothea” from a 17th-century Dorothea von Schlegel who composed Catholic hymns. The couple continued to visit the salons of Rahel Levin and Henriette Herz, as well as the constellation which surrounded Madame de Staël. [6] After twenty years in Vienna, where Schlegel held the position of court secretary, she moved after his death in 1829 to her son Philipp Veit in Frankfurt, who was director of the Städelsches Kunstinstitut. There she lived until her death in 1839.

As the daughter of the philosopher Moses Mendelssohn, who had translated the works of John Locke and Alexander Pope, as well as Hebrew scriptures into German, Dorothea was surrounded throughout her life by poets, critics, musicians, novelists, and philosophers of Europe. Gotthold Ephraim Lessing was her father’s closest friend and colleague, and the emancipation and secularization of the Jews and Jewish culture was a direct outcome of their work. Dorothea’s brother, Joseph, was a friend and sponsor of Alexander von Humboldt, the naturalist and ethnologist. Felix Mendelssohn, the composer, and his sister Fanny Mendelssohn, also a gifted musician, were her nephew and niece.

For some Jews, she may be a less than admirable figure as well, having left her Jewish husband, violated her divorce settlement, and converted first to Protestantism, and finally to Catholicism. Most of her later friends were Christians, assimilated or intermarried Jews (like Rahel Levin), or secular Deists and materialists. Her association with Germaine de Staël was obviously of the greatest importance, since Mme de Staël was also the patron and literary companion of Dorothea’s second husband, Friedrich Schlegel.

Jonathan Bate, The Origins of Romanticism, [8]