You are here: Home › aviation › Floyd Bennett and his North Pole Flight 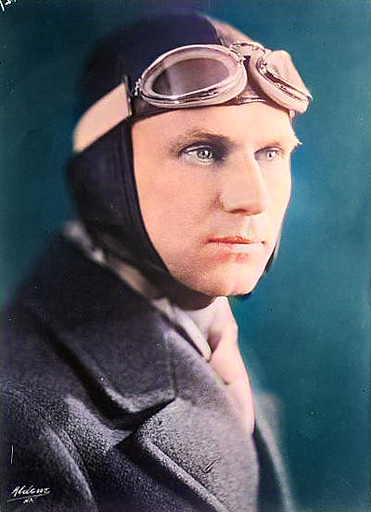 On October 25, 1890, American aviator Floyd Bennett was born. BennettBennett claimed, along with Richard E. Byrd, to have made the first flight to the North Pole in 1926.[1] However, their claim to have reached the pole is disputed.

Floyd Bennett was born in Warrensburg, New York. He was an automobile mechanic before he enlisted in the Navy in 1917, during World War I. Bennett attended flight school, learned to fly and was rated as an Aviation Pilot. In 1925 he made a reconnaissance flight with Richard E. Byrd over Greenland.[1]

Trying to Reach the North Pole by Plane

The following year Bennett was appointed pilot for Richard E. Byrd’s attempt to reach the North Pole by air in 1926. The two men took off in May in a Fokker Tri-motor called the Josephine Ford. During that day they returned to their airfield in Spitzbergen. The plane lost oil and while Bennett advised turning back, Richard Byrd decided to continue the flight. The crew claimed to have reached the North Pole, but the press remained skeptical since it seemed that they had been away from Spitzbergen too briefly to have reached the North Pole.

Back in the United States, Bennett and Byrd received amongst many other honors the Medal of Honor. Shortly after, Bennett was promoted from Chief Aviation Pilot to the warrant officer rank of Machinist. However, the discovery of Byrd’s diary of the flight, with erased sextant readings, has been considered as evidence they might not have reached the North Pole after all. Further, Bernt Balchen claimed that on the way back from Spitzbergen, Bennett confessed not to have reached the North Pole and instead the crew flew in circles.

In 1927, Richard Byrd and his aviation team were candidates to win the famous Orteig Prize for the first nonstop flight between France and the United States. However, Floyd Bennett was at the time seriously injured due to an accident during practice and the plane was severely damaged as well. As a result, Charles Lindbergh won the Orteig Prize. He successfully flew from Long Island, New York, nonstop to Paris, France.[2]

The German aircraft Bremen managed the first Atlantic crossing in the opposite direction, from east to west;[3] the plane was damaged when landing on Greenly Island (Canada). Bennett and Balchen flew to their rescue. Bennett had developed pneumonia following a previous crash, and succumbed to his fever while in flight on April 25, 1928.

Balchen flew the remaining eight hours, and he was paid $10,000 for the effort, an amount that was passed to Bennett’s widow. Byrd later christened the plane with which he first flew over the South Pole during the Byrd Antarctic Expedition in November 1929 in the name of his deceased friend Floyd Bennett. Above the South Pole, he dropped a US flag weighted down with a stone from Bennett’s grave.