You are here: Home › physics › Faster than the Speed of Light – Ilya Frank and the Cherenkov Radiation 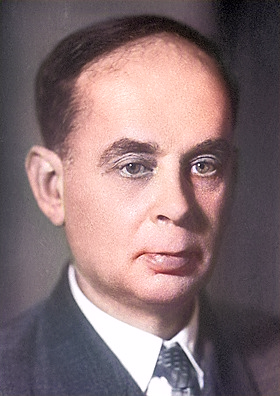 On October 23, 1908, Soviet physicist Ilya Mikhailovich Frank was born. Frank received the Nobel Prize for Physics in 1958 jointly with Pavel Alekseyevich Cherenkov and Igor Y. Tamm for his work in explaining the phenomenon of Cherenkov radiation, an electromagnetic radiation emitted when a charged particle (such as an electron) passes through a dielectric medium at a speed greater than the phase velocity of light in that medium.

Ilya Frank was born in St. Petersburg, Russia, to Mikhail Lyudvigovich Frank, a talented mathematician descended from a Jewish family, and Yelizaveta Mikhailovna Gratsianova, a Russian Orthodox physician. His father participated in the student revolutionary movement, and as a result was expelled from Moscow University. After the October Revolution, he was reinstated and appointed professor.

Ilya Frank studied mathematics and theoretical physics at Moscow State University. From his second year he worked in the laboratory of Sergey Ivanovich Vavilov, whom he regarded as his mentor. After graduating in 1930, on recommendation of Vavilov, he started working at the State Optical Institute in Leningrad. There he wrote his first publication — about luminescence —  with Vavilov. The work he did there would form the basis of his doctoral dissertation in 1935.

Faster than the Speed of Light

In 1934, Frank moved to the Institute of Physics and Mathematics of the USSR Academy of Sciences, were he started working on nuclear physics, a new field for him. He became interested in the effect discovered by Pavel Cherenkov that charged particles moving through water at high speeds emit light.[2] In 1937, working with his colleague Igor Y. Tamm, Frank determined that the radiation emits charged particles that move faster than the speed of light — not faster than the sped of light in a vacuum, but faster than the reduced speed of light in a liquid. In exceeding this limit the particles shed a portion of their energy, which the human eye perceives as the color blue.[3]

Together with Igor Tamm, Frank developed a theoretical explanation: the effect occurs when charged particles travel through an optically transparent medium at speeds greater than the speed of light in that medium, causing a shock wave in the electromagnetic field.[1] The amount of energy radiated in this process is given by the Frank–Tamm formula.

The 1958 Nobel Prize in Physics

The discovery and explanation of the effect resulted in the development of new methods for detecting and measuring the velocity of high-speed nuclear particles and became of great importance for research in nuclear physics. Cherenkov radiation is also widely used in biomedical research for detection of radioactive isotopes. In 1946, Cherenkov, Vavilov, Tamm, and Frank were awarded a Stalin Prize for their discovery, and 1958 Cherenkov, Tamm, and Frank received the Nobel Prize in physics.

In 1944, Frank was appointed professor and became head of a department at the Institute of Physics and of the Nuclear Physics Laboratory. Frank’s laboratory was involved in the (then secret) study of nuclear reactors. In particular, they studied the diffusion and thermalization of neutrons. In 1957, Frank also become director of the Laboratory of Neutron Physics at the Joint Institute for Nuclear Research. The laboratory was based on the neutron fast-pulse reactor (IBR) then under construction at the site. Under Frank’s supervision the reactor was used in the development of neutron spectroscopy techniques.