You are here: Home › physics › Edward Appleton and the Discovery of the Ionosphere 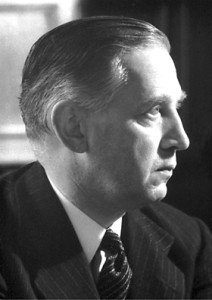 On September 6, 1892, English physicist Sir Edward Victor Appleton was born. Appleton won the Nobel Prize in Physics in 1947 for his seminal work proving the existence of the ionosphere during experiments carried out in 1924.

“I am only a physicist with nothing material to show for my labours. I have never even seen the ionosphere, although I have worked on the subject for thirty years. That does show how lucky people can be. If there had been no ionosphere I would not have been standing here this morning.”
– Edward Victor Appleton

Edward Victor Appleton was born in Bradford near West Yorkshire. He attended the Hanson Grammar School. At the age of 18 he won a scholarship to St John’s College at Cambridge University. He completed his studies with first class marks in the fields of natural sciences.Appleton attended St. John’s College, Cambridge where he earned his B.A. degree in Natural Science and already won the Wiltshire Prize in 1913 and the Hutchinson Research Studentship in 1914. During the First World War he joined the Duke of Wellington’s Regiment, later he was transferred to the Royal Engineers. After Appleton returned from active service in the war, he became an assistant in experimental physics at the Cavendish Laboratory in 1920.

It is believed that in 1919, Appleton first devoted himself to scientific problems in atmospheric physics. Starting from 1924, Edward Appleton was appointed Professor of Physics at London University. In the same year, he started a series of experiments proving the existence of the layer in the upper atmosphere called ionosphere.  Appleton had observed that the strength of the radio signal from a transmitter on a frequency such as the medium wave band and over a path of a hundred miles or so was constant during the day but that it varied during the night. This led him to believe that it was possible that two radio signals were being received. One was travelling along the ground, and another was reflected by a layer in the upper atmosphere. The fading or variation in strength of the overall radio signal received resulted from the interference pattern of the two signals.

The existence of a reflecting atmospheric layer was not in itself a completely new idea. Balfour Stewart had suggested the idea in the late 19th century to explain rhythmic changes in the earth’s magnetic field. More recently, in 1902, Oliver Heaviside [3] and Arthur E. Kennelly had suggested such a electromagnetic-reflecting stratum, now called the Kennelly-Heaviside layer, may explain the success Marconi [4] had in transmitting his signals across the Atlantic. Calculations had shown that natural bending of the radio waves was not sufficient to stop them from simply “shooting off” into empty space before they reached the receiver. Appleton thought the best place to look for evidence of the ionosphere was in the variations he believed it was causing around sunset in radio signal receptions. It was sensible to suggest these variations were due to the interference of two waves but an extra step to show that the second wave causing the interference (the first being the ground wave) was coming down from the ionosphere. The experiment he designed had two methods to show ionospheric influence and both allowed the height of the lower boundary of reflection (thus the lower boundary of the reflecting layer) to be determined. The first method was called frequency modulation and the second was to calculate the angle of arrival of the reflected signal at the receiving aerial. 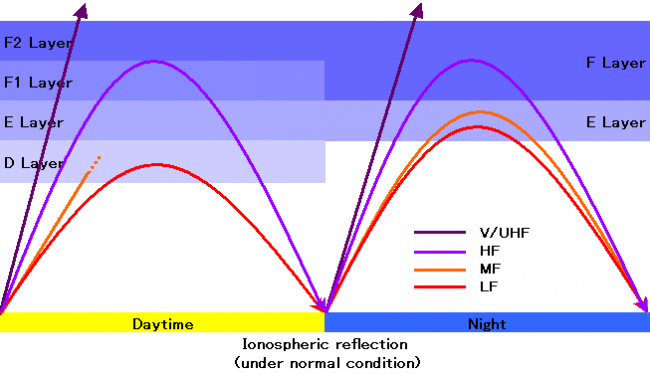 The ionosphere is that part of the atmosphere of a celestial body that contains large amounts of ions and free electrons. Among the planets of the solar system, the ionosphere makes up the majority of the high atmosphere. The ionisation of gas molecules is caused by high-energy components of solar radiation (hard ultraviolet and X-rays). The ionosphere of the Earth influences radio communications by reflecting short waves, thus enabling worldwide connections. It also attenuates the propagation of radio waves with long wavelengths. It begins above the mesosphere at an altitude of about 80 km, reaches its highest electron density around 300 km and finally passes into interplanetary space. In 1926, Scottish physicist Robert Watson-Watt introduced the term ionosphere in a letter published only in 1969 in Nature.[5] Lloyd Berkner first measured the height and density of the ionosphere. This permitted the first complete theory of short-wave radio propagation. Appleton’s research significantly advanced radio research and broadcast. In 1926, Appleton discovered a further atmospheric layer 150 miles above ground, higher than the Heaviside Layer and electrically stronger. This layer, named the Appleton Layer after him, reflects short waves round the earth.

Between 1924 and 1936 he was Professor of Physics at the University of London and then Professor of Natural Philosophy (Science) at Cambridge University until 1939. Between 1939 and 1949, Edward Appleton held the post of Secretary to the Department of Scientific and Industrial Research. He was ennobled in 1941. Appleton was awarded the Nobel Prize in Physics in 1947 for his important contributions to the understanding of the ionosphere. The technology used in this work led, among other things, to the development of radar. Two years later, Appleton moved to the University of Edinburgh to become principal and vice-chancellor, a position he held for the rest of his life. He died on 21 April 1965.