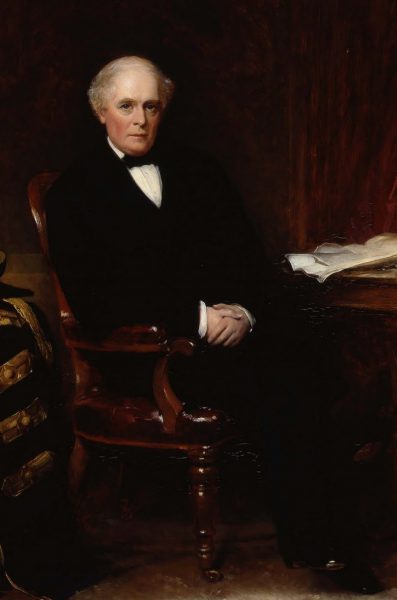 On December 2, 1802, Irish physician Sir Dominic John Corrigan was born. Corrigan is known for his original observations in heart disease. The abnormal “collapsing” pulse of aortic valve insufficiency is named Corrigan’s pulse after him.

Dominic John Corrigan was born in Thomas Street, Dublin, the son of John Corrigan, a dealer in agricultural tools. He was educated in St. Patrick’s College, Maynooth, near Dublin, which then had a department for secular students apart from the ecclesiastical seminary. He was attracted to the study of medicine by the physician in attendance, and spent several years as apprentice to the local doctor, Edward Talbot O’Kelly. Corrigan studied medicine in Dublin later transferring to Edinburgh Medical School where he received his degree as MD in August 1825.

He became a physician at Jervis Street Hospital in Dublin, where he set up a private practice at 11 Ormond Street and began his clinical-pathological work. In 1829 Corrigan joined the Sick-Poor Institution of Dublin and lectured in the institutes (i.e., theory) and practices of medicine. His article on “Permanent Patency of the Aortic Valves” appeared in the Edinburgh “Medical and Surgical Journal” for April, 1832. This classic clinical descriptions of aortic incompetence also include Corrigan’s Pulse, and Corrigan’s Sign. Aortic insufficiency (AI), also known as aortic regurgitation (AR), is the leaking of the aortic valve of the heart that causes blood to flow in the reverse direction during ventricular diastole, from the aorta into the left ventricle. As a consequence, the cardiac muscle is forced to work harder than normal. Corrigan’s pulse, also known as collapsing pulse or waterhammer pulse, is the medical sign which describes a pulse that is bounding and forceful, rapidly increasing and subsequently collapsing, as if it were the sound of a waterhammer that was causing the pulse.

Corrigan was eminently successful as a teacher of medicine.[3] In addition to his work as a cardiologist he also developed a cauterising device known as Corrigan’s Button. This exquisitely painful looking instrument was heated and placed on the skin several times to treat, among other ailments, sciatica. It was also used as a form of shock treatment for psychiatric patients.[4]

On Famine and Fever

His work with many of Dublin’s poorest inhabitants led to him specializing in diseases of the heart and lungs, and he lectured and published extensively on the subject. In 1846, as reports of the potato blight reached Dublin, Corrigan published a pamphlet on Famine and Fever. By analysing fever epidemics of the previous century Corrigan showed that although contagion, poor sanitation, the climate and poverty were important factors in the spread of fever, the one outstanding common feature was famine. He went on to show that in Ireland the commonest cause of famine was the failure of the potato harvest.[2]

In 1847 Corrigan was appoint physician-in-ordinary to the Queen in Ireland. Two years later he was given an honorary MD from Trinity College. In 1846 Corrigan’s application to become a fellow of the Royal College of Physicians of Ireland was blocked. In 1855 he got around this opposition by sitting the college’s entrance exam with the newly qualified doctors. He became a fellow in 1856, and in 1859 was elected president, the first Catholic to hold the position; he was re-elected president an unprecedented four times.[1] There is a statue of Corrigan in the Graves’ Hall of the College by John Henry Foley. In 1849 he gained an honorary M.D. degree from Trinity College.

In 1852 as the worst effects of the Irish Famine were beginning to pass Corrigan was still actively campaigning for improvements in living conditions and health care for the poor, and for lessons to be learnt from the mistakes of the past. He also represented Dublin in the House of Commons from 1870 to 1874. In 1866 he was created a baronet, of Cappagh and Inniscorrig in the County of Dublin and of Merrion Square in the City of Dublin,[4] partly as a reward for his services as Commissioner of Education for many years. At a by-election in 1870 Corrigan was elected a Liberal Member of Parliament for Dublin. In parliament he actively campaigned for reforms to education in Ireland and the early release of Fenian prisoners. He did not stand for re-election in 1874; his support for temperance and Sunday closing (of pubs) is thought to have antagonised his constituents and alcohol companies.

Corrigan’s published material, including his report on the causes and treatment of aortic insufficiency, was based on observation of patients at various Dublin hospitals. His better-known studies were on cirrhosis of the lung (1838), aortitis as a cause of angina pectoris (1837), and mitral stenosis (1838). “Corrigan’s respiration” refers to a shallow respiration in fever.[1]