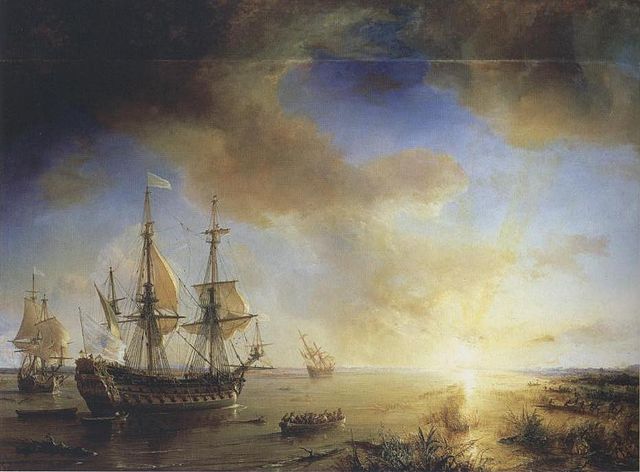 On April 7, 1682, French explorer René-Robert Cavelier, Sieur de La Salle reached the mouth of the Mississippi river at the end of his great expedition, claiming the region watered by the Mississippi and its tributaries for France, and naming it Louisiana after King Louis XIV. His last expedition was to invade and conquer part of the Spanish province of Mexico, which failed and cost La Salle his life.

René Robert Cavelier was born in November 21, 1643, the son of the wealthy merchant Jean Cavelier in Rouen. The name “La Salle”, which he later adopted, came from a family estate near Rouen. René Robert received his education at the Jesuit College of Rouen and joined the Order as a novice. However, in 1666, at the age of 22, he left the Jesuit Order and travelled to the French colony of New France, later “Canada”, where his brother Jean, a priest of the Sulpizian Order, was staying. This order gave him a piece of land near Montreal. There he began to build a fortified settlement, was active in the fur trade and learned Indian languages. It is believed that La Salle began almost immediately to issue land grants and set up a village. However, by July, 1669, he was ready to search for the Pacific Ocean and hoped to reach it by way of the Ohio River. However, La Salle spoke no Algonquian and no Iroquoian and by November, he already announced to return home because , as he said, of his poor health. La Salle managed to return to the colony at the end of the summer 1670, claiming that he discovered the Mississippi ahead of Jolliet and Marquette.[4]

Three years later, Louis de Buade de Frontenac, back then the Govenor of New France, sent La Salle as his emissary to Lake Ontario. He was granted permission to build a fort (Fort Frotenac). In 1677 La Salle travelled to France and was officially commissioned by Louis XIV to explore the west of New France and to build as many forts there as he deemed necessary. Despite the support of the crown, La Salle did not receive any money, which forced him to borrow large sums of money. Besides his debts, the hostility of the Jesuits continued to cause him difficulties. In 1678 La Salle returned to Canada. In 1679 he had the “Griffon” built on Lake Erie for trading purposes. This first sailing ship on the Great Lakes was intended to raise the necessary funds for an expedition along the Mississippi discovered by Louis Joliet and Jacques Marquette in 1673. He had come to the conclusion that the Mississippi did not flow into the Pacific Ocean but into the Gulf of Mexico, and planned to dock a fortified harbour there, which was against Spanish and English competition. As a preparation, he also learned survival techniques from the Indians, with whose help he managed dangerous situations several times. His plans suffered severe setbacks when the “Griffon” shipwrecked and in 1680 a mutiny at Fort Crèvecœur on the Illinois River.

With the help of the Crown, La Salle now organized an expedition in France with which he wanted to reach the mouth of the Mississippi by sea and establish a colony there. From there, the Spanish colonies in Mexico and in present-day Texas, with which France was at war, were to be attacked. From the beginning there were doubts about the feasibility of the plan, but Louis XIV supported it and provided ships. The expedition suffered difficulties from the beginning. The relationship between La Salle and the captains under his command was bad. In the Caribbean, a ship was lost to pirates. Further difficulties resulted from illnesses on board and navigation problems. The expedition missed the mouth of the Mississippi River and landed in Matagorda Bay in present-day Texas about 800 km away on 20 February 1685. La Salle had a fortified settlement called Fort St. Louis built for the 200 colonists. With the sinking of the flagship “L’ Aimable” and in 1686 of the last remaining ship “La Belle“, important material and the connection to the outside world were lost. From Fort St. Louis, La Salle undertook two expeditions to the west and east to determine its location. On a third expedition, with which he wanted to get help for the colony, he was murdered by members of his expedition on March 19, 1687. The remaining 20 colonists were killed when Indians attacked Fort St. Louis in the winter of 1688/1689. Some children were later freed by the Spaniards.

“I, René-Robert Cavelier de La Salle, by virtue of His Majesty’s commission, which I hold in my hands, and which may be seen by all whom it may concern, have taken and do now take, in the name of His Majesty and of his successors to the crown, possession of the country of Louisiana, the seas, harbours, ports, bays, adjacent straits, and all the nations, peoples, provinces, cities, towns, villages, mines, minerals, fisheries, streams and rivers, within the extent of the said Louisana.”

In 1684, Louis XIV commissioned La Salle to establish a French colony in Louisiana and more than 200 recruits set sail from La Rochelle aboard four ships. It is believed that they were not exactly sure where they were going, but the objective was to find the Mississippi by way of the Atlantic, the Caribbean and the Gulf of Mexico. La Salle’s party was reduced soon due to the shortage of supplies and drinking water. Also, one of the vessels was lost and it is believed that in the end, La Salle alienated even those who had remained faithful to him to the end. He died in the land that is now Texas, shot dead at point blank range on March 19, 1687.

Although La Salle was undoubtedly one of the most important pioneers of French colonization of North America and possessed vision and foresight as well as the ability to proceed systematically and according to plan, he failed. In addition to misfortunes, his character deficiencies – he was accused of arrogance, impatience and lack of sensitivity in dealing with his subordinates – seem to have played a decisive role in this. Nevertheless, his discoveries and travels were of great importance, as they determined the lines of development for the French colonies in North America. Since Spain, under the impression of the French colony, had so far only claimed, but started to develop undeveloped areas in the west of present-day Texas, La Salle’s expedition indirectly brought about the emergence of the present-day US state of Texas.