You are here: Home › music › Joseph Haydn – the Father of the Symphony 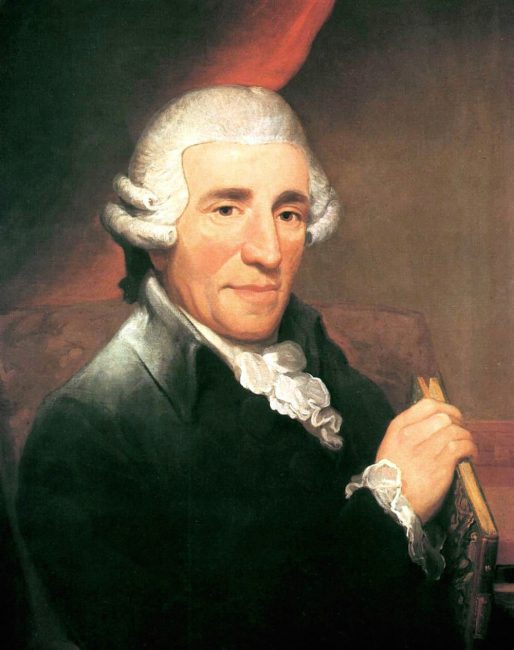 On March 31 (or April 1) 1732, Austrian composer Joseph Haydn was born. The composer of the Viennese Classicism was instrumental in the development of chamber music such as the piano trio. His contributions to musical form have earned him the epithets “Father of the Symphony” and “Father of the String Quartet”.

“My language is understood all over the world.”
– Joseph Haydn on Mozart’s objection that he speaks too few languages to travel to London

Joseph Haydn was born in Markt Rohrau in the Archduchy of Austria, today’s Lower Austria, as the second of twelve children of the market judge Mathias Haydn and his wife Maria Haydn (née Koller). Although neither parent could read music notes, Haydn recalls that his family and neighbours often sang together. His musical talent was discovered when he was still a small child. In 1740 he was noticed by Georg von Reutter, the musical director of St. Stephen’s Cathedral in Vienna, as he travelled through the provinces to find talented choir boys. Reutter took Haydn with him to Vienna, where he lived for nine years as a choir singer. In the cathedral chapel Haydn received singing, piano and violin lessons. Haydn learned a great deal – largely through self-instruction and probably simply because he was a professional musician at a young age in a place that was important for music.

Working as a Freelancer

In 1749 Haydn’s voice change was completed, so that he could no longer sing the high voices in the choir. He was dismissed from his position and began a career as a freelance musician. In the course of this arduous ten-year period, Haydn pursued many different activities, including as a valet and accompanist to the Italian composer Nicola Porpora. He endeavoured to fill the gaps in his education and eventually wrote his first string quartets and his first opera. Probably in 1757 Haydn received his first important position as music director of Count Karl of Morzin at the chateau Dolní Lukavice near Pilsen. Haydn dated his first symphony, composed in Morzin’s service, to this year. As music director he conducted a small orchestra, and for this ensemble he wrote his first symphonies, string trios, cassations and string quartets.

Haydn was quickly offered a similar position by the Esterházy family, one of the wealthiest and most important magnate families in the Kingdom of Hungary, initially as vice-kapellmeister. In 1766, Haydn was promoted to First Kapellmeister. Now he was also able to compose sacred works. His Stabat Mater, written in 1767, stands out from other settings of this sequence both in terms of time and instrumentation. Haydn’s enormous workload included composing, conducting the orchestra, playing chamber music for and with his patron and arranging operas. The Princes Esterházy were music connoisseurs who appreciated his work and gave him the space for his artistic development, including daily access to his own small orchestra. During the almost thirty years he spent in the Esterházy house, Haydn produced a flood of compositions, and his musical style continued to develop. His popularity in the outside world also increased. Gradually Haydn wrote as much for publications as for his employer, and some important works of this period, such as the Paris Symphonies (1785-1786) and the original orchestral version of the Seven Last Words of our Saviour on the Cross (1786), were commissioned from abroad.

“Before God and as an honest man I tell you that your son is the greatest composer known to me either in person or by name: He has taste, and, furthermore, the most profound knowledge of composition.”
– Joseph Haydn, quoted  in a letter from Leopold Mozart to Maria Anna Mozart (1785)

From about 1781 a close friendship developed between Haydn and Mozart,[1,2,3] whose work he had influenced for years. Both composers enjoyed playing together in string quartets. Haydn was impressed by Mozart’s work. He now wrote fewer operas and concerts. Mozart endeavoured to write six string quartets at the level Haydn had reached with his soon-to-be-completed series op. 33; when Mozart finished, he dedicated the quartets to his friend.

Prince Nicholas died in 1790; his unmusical successor dismissed all court music and sent Haydn into retirement. He accepted a lucrative offer from the German impresario Johann Peter Salomon to go to England and perform his new symphonies with a large orchestra. The trips (1791-1792 and 1794-1795) were successful. The audience stormed Haydn’s concerts and he quickly acquired fame and fortune. Musically, some of his most famous works were written for the visits to England, including the Surprise Symphony (Symphony No. 94), the Military Symphony, the London Symphony, the Equestrian Quartet and the Gypsy Trio. Haydn even considered becoming an English citizen and settling permanently, but he returned to Vienna.

Haydn also composed the last nine of a long series of string quartets, including the Sunrise Quartet and the Imperial Quartet. In 1800 Haydn’s wife died during a stay at a spa in Baden near Vienna. From 1802 Haydn was no longer physically able to compose or perform publicly due to an illness he had suffered from for some time. Nevertheless, the stream of fresh musical ideas waiting to be developed did not stop him. The sick Haydn was well looked after by his servants and received many visits and public honors. Haydn died of old age in 1809, while the French army under Napoleon invaded Vienna. Among his last words was an attempt to calm the servants when cannon shots were fired in the neighborhood.

Haydn is traditionally regarded as the “father” of the classical symphony and string quartet and was an innovator in the writing of piano sonatas and piano trios. Although other early classical composers, such as Carl Philipp Emanuel Bach for the piano sonata and Johann Christian Bach and Leopold Mozart for the symphony, played an important role, Haydn’s influence is considered to be predominant. Haydn also contributed to the development of sonata form from a simple formal scheme derived from the “Sonata bipartita” to a subtle and flexible form of musical expression. He also invented the sonata rondo form, the variation form with two themes, and he was the first important composer to introduce fugue and contrapuntal elements into the classical form. A central characteristic of Haydn’s music is the development of larger structures from very small and simple musical motives. The music is often formally quite concentrated, and the important musical events of a movement can unfold quickly. Haydn’s compositional practice influenced both Mozart and Beethoven.[5] Perhaps more than any other composer, Haydn is known for the jokes he put into his music. The most famous example is the sudden loud chord in Symphony No. 94 “Surprise Symphony”.