You are here: Home › astronomy › In Search for Exoplanets with the CoRoT Space Observatory 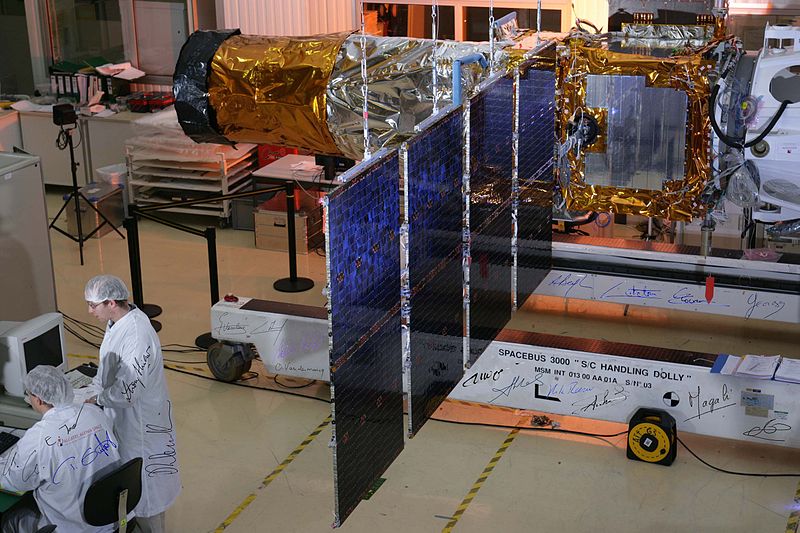 The CoRoT satellite in the integration hall of Thales Alenia Space, Cannes

On December 27, 2006, the European space observatory CoRoT was launched. CoRoT‘s two objectives are to search for extrasolar planets with short orbital periods, particularly those of large terrestrial size, and to perform asteroseismology by measuring solar-like oscillations in stars.

CoRoT stands for COnvection ROtation and planetary Transits (French: COnvection ROtation et Transits planétaires) and is a space observatory mission led by the French Space Agency (CNES) in conjunction with the European Space Agency (ESA) and other international partners. It was launched in December 2006 and reported first light on 18 January 2007. CoRoT became the first spacecraft dedicated to the detection of transiting extrasolar planets, opening the way for more advanced probes such as Kepler as well as future missions such as TESS and PLATO.

According to the method of asteroseismology, the inner structure of stars should be revealed from regular fluctuations in their brightness. For the investigations, stars of the main series (spectral classes F and G, Delta-Scuti stars) with an apparent brightness of higher than 9 mag and lower than 6.5 mag were selected. One observation period in the so-called main program lasted 150 days. During this time Corot observed 10 stars each. The following parameters were determined by a high-precision measurement of the brightness fluctuations (0.1 to 10 Hz):

In addition to the 150-day sections of the main observation program, Corot had an “explorative” program. The explorative program examined a large number of different stars of spectral classes B to K. For this, periods of about 20 days were inserted between the observation periods of the main program. The measurement frequency was reduced to 0.6 Hz. This allowed statistical information to be obtained on the ratio of vibration types to mass, age, angular velocity, and metallicity of the stars studied. 50 to 100 objects should be examined.

The scientific breakthroughs possible through the help of CoRoT’s data in the field of asteroseismology includes the extension of the chemically mixed zone in main sequence stars. That means that above the convective core, some layers can be affected by partial or total mixing during the main sequence phase of evolution. This involves longer time scales for nuclear burning phases and may in particular affect the value of the stellar mass at the transition between those stars which end up their life as white dwarfs and those which face a final supernova explosion.

Further impact of the CoRoT observatory involves red giants. They have an extended convective envelope favorable to the excitation of solar-like oscillations. A major success of CoRoT has been the discovery of radial and long-lived non-radial oscillations in thousands of red giants in the exo field. For each of them, the frequency at maximum power νmax in the frequency spectrum as well as the large frequency separation between consecutive modes Δν could be measured, defining a sort of individual seismic passport.

By monitoring a very large number of stars, exoplanets should be searched for which lead to a short-term decrease in brightness during transit in front of their mother star (transit method). At the same time, 12,000 stars were monitored (up to 180,000 in total). The examined stars had an apparent brightness of 12 mag down to 15.5 mag. They were usually stars of the spectral classes K and M. Besides the discovery of “hundreds” planets of Jupiter size, the scientific planning documents of the mission expected that 10 to 40 planets of earth size would be discovered in other solar systems. After all, the search for exoplanets was far less successful than planned. 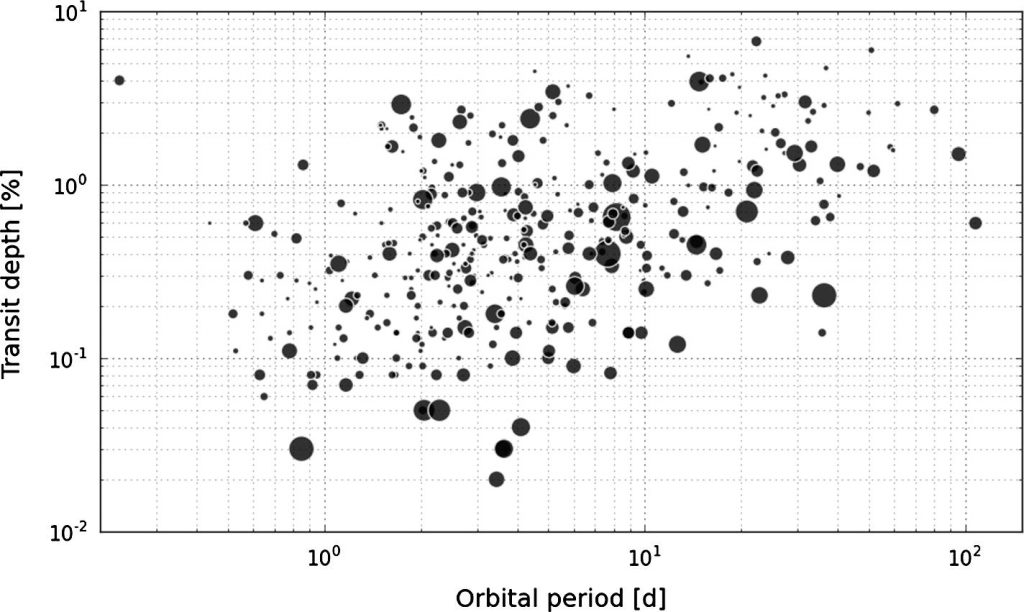 Fig D. The timing and transit depth of all CoRoT planet candidates (courtesy A. Santerne). The size of the symbols indicates the apparent brightness of its parent star (small meaning faint).

CoRoT was able to detect the first exoplanet (COROT-1b) in 2007. In February 2009, during the First Corot Symposium, the super-earth COROT-7b was announced, which at the time was the smallest exoplanet to have its diameter confirmed, at 1.58 Earth diameters. The discoveries of a second non-transiting planet in the same system, COROT-7c, and of a new Hot Jupiter, COROT-6b, were also announced at the Symposium. In June 2011, during the Second CoRoT Symposium, the probe added ten new objects to the Exoplanet catalogue. As of Fall 2011, around 600 additional candidate exoplanets are being screened for confirmation

On 2 November 2012, CoRoT suffered a computer failure that made it impossible to retrieve any data from its telescope. After repair attempts, in June 2013, it was announced that CoRoT has been retired and would be decommissioned, lowered in orbit to allow it to burn up in the atmosphere. After some technical experiments were carried out, the satellite was shut down on 17 June 2014.

The making of NASA’s most powerful space telescope, [5]