You are here: Home › engineering › Cornelis Drebbel and the first navigatable Submarine 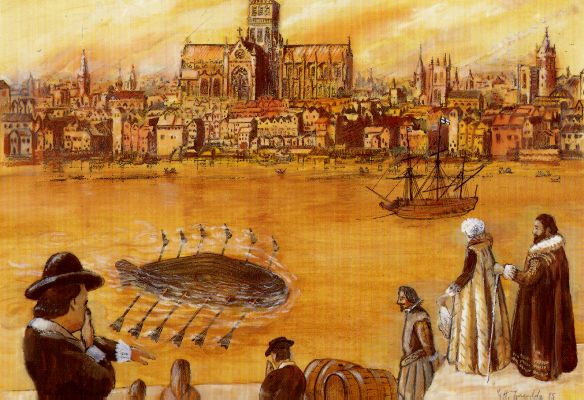 On November 7, 1633, Dutch innovator and inventor Cornelis Jacobszoon Drebbel passed away. Drebbel contributed to the development of measurement and control systems, optics and chemistry, but he is best known for having built the first navigatable submarine in 1620.

Cornelis Drebbel was born in Alkmaar, Holland in 1572. After some years at the Latin school in Alkmaar, around 1587, he attended the Academy in Haarlem, also located in North-Holland.There, Drebbel became a skilled engraver on copperplate and also took an interest in alchemy. Initially, Drebbel worked as a painter, engraver and cartographer. But he was in constant need of money because of the prodigal lifestyle of his wife. 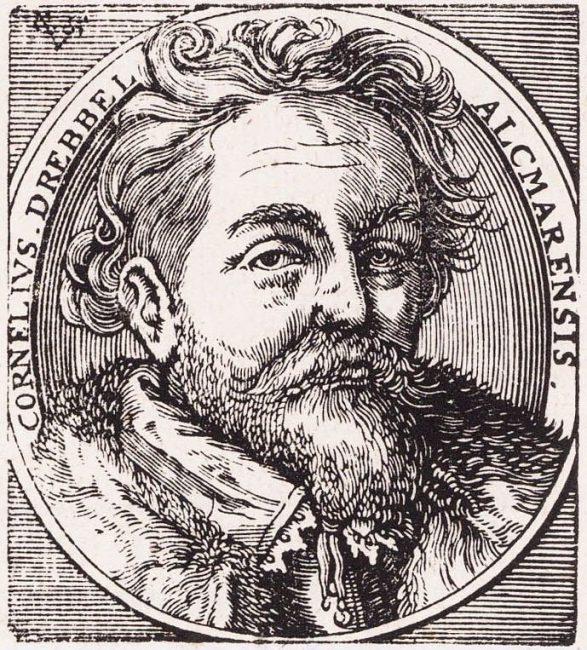 In 1600, Drebbel was in Middelburg where he built a fountain at the Noorderpoort. He met there with Hans Lippershey, spectacle maker and constructor of telescopes, and his colleague Zacharias Jansen. Drebbel learned lens grinding and optics, with the construction of a magic lantern and a camera obscura. Around 1604 the Drebbel family moved to England. He was accommodated at Eltham Palace. Drebbel worked there at the masques, that were performed by and for the court. He was attached to the court of young Renaissance crown-prince Henry and astonished the court with his inventions and optical instruments. Drebbel became famous for his inventions, some of which were unusual. The most important of these are

He introduced or popularized scientific instruments such as thermometer, telescope and microscope in England and used the thermometer in chemical experiments. He ground lenses and one of his microscopes was bought by Constantijn Huygens.[7]

In the 1610s, Drebbel and his family moved to Prague on invitation of Emperor Rudolf II where he was preoccupied with the arts, alchemy and occult sciences. Unfortunately, Drebbel was imprisoned after Rudolf II was stripped of all effective power. Even though, Drebbel was released one year later and went back to London where he faced financial difficulties because his patron prince Henry had also died. According to Robert Boyle,[5] he recognized that air contains a quintessence necessary for breathing and presented a liquid in a bottle to replace used air (according to J. R. Partington, alkali lye to absorb carbon dioxide, but according to Claus Priesner, this does not explain the necessary oxygen supply). Exactly what was involved is not known. He knew that when saltpeter is heated, a gas is released.

The story goes that, while making a coloured liquid for a thermometer Cornelis dropped a flask of aqua regia on a tin window sill, and discovered that stannous chloride makes the colour of carmine much brighter and more durable. Although Cornelis did not make much money from his work, his daughters Anna and Catharina and his sons-in-law Abraham and Johannes Sibertus Kuffler set up a very successful dye works. One was set up in 1643 in Bow, London, and the resulting colour was called bow dye. The recipe for “colour Kufflerianus” was kept a family secret, and the new bright red colour was very popular in Europe.

Cornelis Drebbel built the first navigable submarine in 1620 while working for the English Royal Navy. Using William Bourne’s design from 1578, he manufactured a steerable submarine with a leather-covered wooden frame. Between 1620 and 1624 Drebbel successfully built and tested two more submarines, each one bigger than the last. The final model had 6 oars and could carry 16 passengers. This model was demonstrated to King James I in person and several thousand Londoners. The submarine stayed submerged for three hours and could travel from Westminster to Greenwich and back, cruising at a depth between 4 to 5 metres. Drebbel even took James in this submarine on a test dive beneath the Thames, making James I the first monarch to travel underwater. This submarine was tested many times in the Thames, but couldn’t attract enough enthusiasm from the Admiralty and was never used in combat. More recently it has been suggested that the contemporary accounts of the craft contained significant elements of exaggeration and it was at most a semi-submersible which was able to travel down the Thames by the force of the current.

He invented tin mordanting in scarlet dyeing (extraction of the dye from the scale insect cochineal), used by his son-in-law Abraham Kuffler in his dye works, and encouraged the establishment of sulfuric acid factories in England (in Ward). Whether he introduced the vitriol process on an industrial scale in England, however, is not precisely known. Some also credit him with the invention of fulminate mercury. His “A short tract on the nature of the elementum” (Leiden 1608) deals with the transformation of the elements (by which fire, water, air, earth are meant) and his “De quinta essentia” (1621) deals with the use of minerals, plants and metals in medicine.