You are here: Home › engineering › Wilhelm Bauer and his Famous Blockade-Breaking Brandtaucher

In December 23, 1823, Bavarian inventor and engineer Wilhelm Bauer was born. Bauer was a submarine pioneer and constructed several hand-powered submarines, among them the famous blockade-breaking incendiary ship, the Brandtaucher.

Wilhelm Bauer and the German/Danish

Wilhelm Bauer was born in Dillingen in the Kingdom of Bavaria. His father was a sergeant of a Bavarian cavalry regiment. Because of this, Wilhelm Bauer, after an apprenticeship as a wood turner, joined the military as well. Working as an artillery engineer he witnessed the German/Danish war for Schleswig-Holstein between 1848 and 1851. Appalled by the amount of damage done by the Danish fleet blockading the Prussian coast, Bauer quickly developed a plan to build a new kind of ship to help break the blockade, by enabling an unnoticed approach of bridges or hostile ships for attaching explosive charges. To accomplish that, he began studying hydraulics and ship construction. But before his studies could bear any fruit, the troops of the German Confederation decided to withdraw and surrender Schleswig-Holstein to the Danish. Bauer, however, was determined to realize his plan at any cost and left his service in the Bavarian army to join the forces of Schleswig-Holstein.

The Difficulties to get Funding

It proved very hard for Bauer, who had a low military rank, to bring his plans through the various hurdles of the military administration and also to gain funding to build his craft. He finally succeeded with the help of famous entrepreneur Werner von Siemens and others and was granted a small sum of money to build a model of his submarine.

The Silent Plunge of Seals

Bauer observed the silent plunge of seals and made trials how an object was able to pause, sink and ascend in water. Bauer’s vessel, the “Brandtaucher” (Incendiary Diver) should work similar to the principle of traditional incendiary ships, but the Brandtaucher should dive under an enemy vessel, fix an electrically triggered mine to its hull and escape, igniting the mine from a safe distance. The more or less same technique was employed by all military submarine designs of that time, like the famous Hunley, which became the first submarine to sink an enemy vessel.[3] 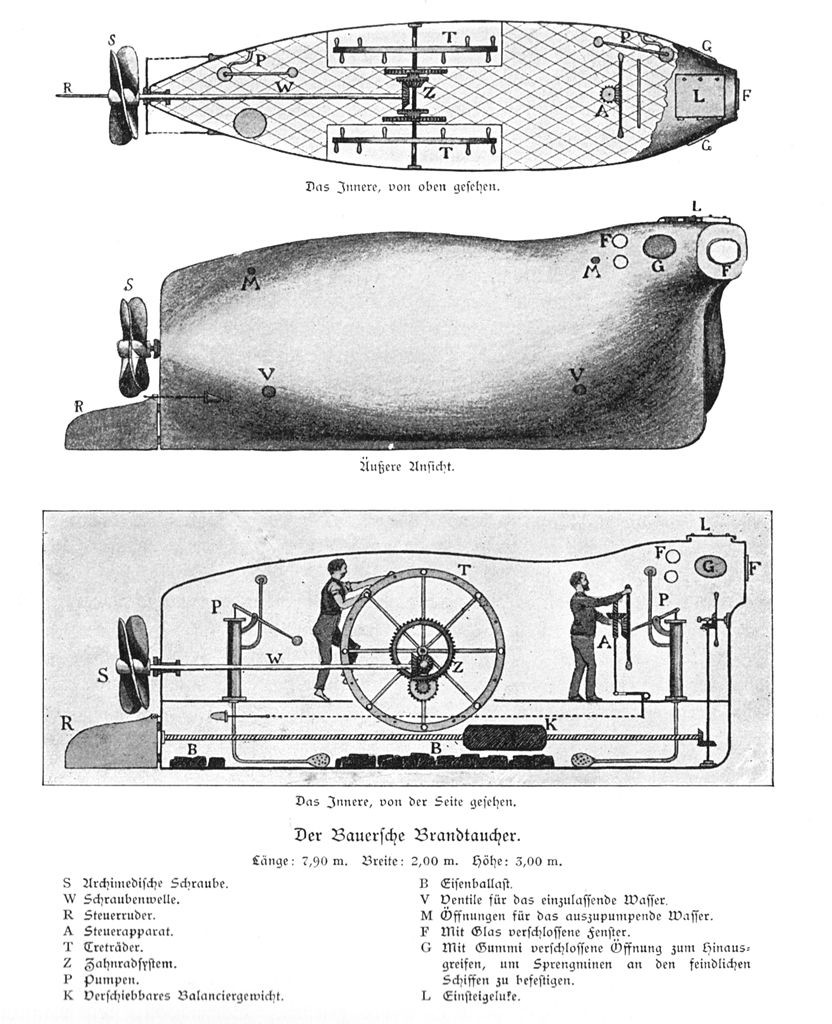 Schematics of the Brandttaucher (from an 1896 book)

An examination board which had to decide on the building of his “Iron Seal” at first required a model, which Bauer presented in 1850. The first dive attempt with a manned, full-scale construction built by the iron foundry Schweffel & Howaldt in Kiel failed, however: Due to imperfect execution the “Brandtaucher” went down, and Bauer only had a narrow escape with his two assistants. The finished Brandtaucher was about 8 meters long, weighing about 30 tons. The ballast tank was located below the deck. It was filled by opening valves and emptied with handpumps. There was a 500 kg weight which could be moved fore and aft to adjust the longitudinal trim. As at that time no suitable mechanical power system was available the submarine was powered by two sailors turning a big tread wheel with their hands and feet. The third crew member, the captain, was positioned at the stern of the submarine. His job was to operate the rudders and other controls. Having arrived under the target ship the captain would reach out through a gutta percha (rubber) glove fixed to an opening of the hull, grab the mine located within reach on the hull of the submarine and fix it on the target.

Although Bauer wanted to make several improvements of the submarine, the military ordered a public show on 1 February 1851. This public demonstration almost ended in a disaster. After reaching a depth of 30 ft the craft began to lay down by the stern. As the submarine sank down the thin walls could not take the water pressure any more and started to crack. The water pressure proved too much for the weak pumps and the propeller wheel was damaged when the vessel began to keel over. The submarine slowly sank to the ground of the Kiel harbour. For six hours Bauer and his sailors had to wait inside the sunken craft, until enough water had seeped in. This increased the air pressure inside the submarine and finally allowed the men to open the blocked hatchway. The sunken submarine was raised in 1887 and can now be visited at the museum of military history at Dresden, Germany.

Bauer’s financial supporters lost interest after Brandtaucher sank, forcing Bauer to take his designs elsewhere. In 1851 Bauer built a further model in Munich, which he showed to the Baviarian King Maximilian II. On his promotion tours he took the model with him in a crate like a salesman to show it to prospective customers – in 1852 he presented it to emperor Franz Joseph in Trieste, thereafter Queen Victoria on the Isle of Wight, where the model got lost during a dive manoeuvre, however.[2] Finally, in 1855, Bauer made a contract with the grand prince of St. Petersburg (Russia) to construct his third submarine, the Sea Devil, also named “Chimäre” by the Russians, built in the Leuchtenberg`schen shipyard, St.Petersburg. Much less information is known about this submarine than of the Brandtaucher. However, it is said to have been twice as long as its predecessor with 21 windows. It had three big cylinders to hold water as diving ballast and was designed for a crew of 12. The ship was transferred to Kronstadt and during the coronation of Alexander II on September 6, 1856, Bauer performed his famous experiment in underwater sound. When the gun salute began, musicians on board the submarine began to play the national anthem which was heard by other ships in the harbor The Sea Devil proved to be a very good design. It made 133 successful diving runs within four months. But during the 134th dive, the submarine got stuck in the sand of the seafloor. By emptying the water cylinders with the pumps, the crew managed to raise the submarine high enough so that the hatchway was above the waterline. The whole crew was saved, but unfortunately, the submarine sank back to the bottom of the sea.

After the end of the sea devil Bauer left Russia for to other projects like e.g. in 1863 he managed to raise a sunken ship by means of inflatable balloons made of canvas. But all his more ambitious plans failed because of a complete lack of funding. Disappointed by this Bauer died in 1875 in Munich.