You are here: Home › war/crime › The Convention of Tauroggen and the European Liberation Wars 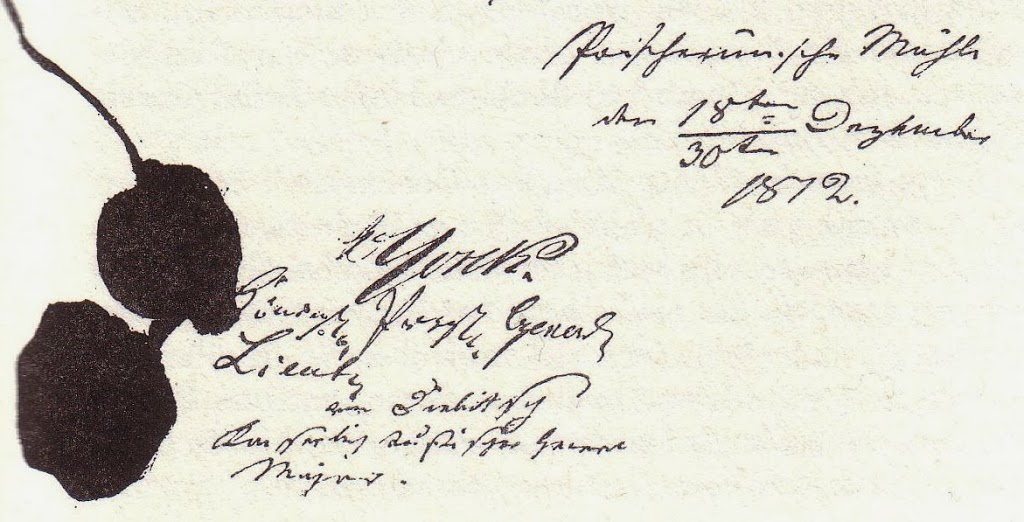 On December 30, 1812, Prussian General Johann David Ludwig Count of Yorck von Wartenburg on his own initiative without permission of the Prussian King decleared a local ceasefire with the Russian General Hans Karl von Diebitsch-Sabalkanski at Tauroggen. The eponymous Convention of Tauroggen marks the starting point of Europe’s Liberation Wars against Napoleon Bonaparte.

Today, Tauroggen, or Taurogé, is a small industrial city in Lithuania not far from the Baltic coast, and almost nobody of you will have heart of it. By the end of the 18th century, Tauroggen belonged to Brandenburg-Prussia, and later – by marriage – to the Russian empire. And in 1812, it should become the starting point of a new age in Europe.

As a result of his alliance commitments to Napoleon in the 1812 Russian campaign, Prussia set up a contingent of troops to secure the northern flank of the Grande Armée, which was advancing towards Moscow, as part of the 10th Corps of French Marshal Jacques MacDonald. During the campaign, MacDonald had penetrated all the way to Riga and the Düna in Kurland, but neither the conquest of the city was sustained, nor were initiatives taken to facilitate the withdrawal of Napoleon’s troops. The leadership of the Prussian Corps had General Yorck since August 20,1812.

On Christmas 1812, a Russian army is approaching East Prussia. At Tauroggen, near the border of Lithuania, they encounter a Prussian supporting army corps, which is by treaty allied with Napoleon Bonaparte, the emperor of France, who had conquered almost the entire European continent. But, instead of a fight, there was a cheerful reunion. This is because at the head of the Russian army are the commanding general Count Diebitsch from Groß-Leipe in Silesia and General Inspector Freiherr vom Stein from Berlin. With great pleasure they recognized in the commander of the Prussians their old friend Count Yorck von Wartenburg from Potsdam. They met in an old mill in the little village of Poscherunen, near Tauroggen, and together they forged an incredible plan: Count Yorck von Wartenburg, on his own account, should become a renegade and ally with the Russians against Napoleon. This, of course, is high treason, but at the same time it was a plan for the liberation of Prussia from Napoleon’s reign!

Yorck relieved his soldiers from their duty, absolved them from their oath to the King and put them in a neutralized state without the consent of their King. On December 30, the memorable Convention of Tauroggen is signed. According to the rules, Yorck von Wartenburg sent a messenger to Berlin to report his treason to the Prussian king. However, he wrote to his king:

“Now or never is the time to regain freedom, independence and greatness. I swear to Ew Royal Majesty that I will await the ball on the heap of sand as calmly as on the battlefield where I have turned grey.”
— Count Yorck von Wartenburg

King Frederick Wilhelm III dismissed Yorck from his command immediately. But, the messenger never reached its destination, because Count Diebitsch didn’t let the bearer pass through his lines. Thus, Count Yorck von Wartenburg did receive the notice of his pending court-martial from the newspaper only. Yorck refused to resign from his command and ignored the King’s order with the following words:

“I will continue unobjectionable with all my duties, because as is well known in the state of Prussia a newspaper is not an official line of command. Up to now, no commanding general has ever received his orders via a newspaper.”
— Count Yorck von Wartenburg

Frederick Wilhelm III dared not to throw off the mask and preferred the flight to the unoccupied city of Breslau. Over there he is already received by the ministers and generals Hardenberg, Scharnhorst, Blücher and Gneisenau, followed by the Russian Tsar. The forces of Napoleon were almost overthrown. Russia and Austria were already on standby as forceful allies, as well as England, Sweden and Denmark. Also the Prussian people were in feverish anticipation and full of enthusiasm. Europe was ready to get rid of Napoleon’s reign. The movement against the French occupiers led to the Russian-Prussian alliance treaty of Kalisch, which was signed on 23/24 February 1813.

On March 17, 1813, Frederick Wilhelm III signed the proclamation “An mein Volk” prepared by his ministers Stein and Hardenberg, which should become the initial signal to the European liberation wars, also known as the German Campaign, against Napoleon.