You are here: Home › physics › There’s Plenty of Room at the Bottom – Richard Feynman and The Birth of Nanotechnology 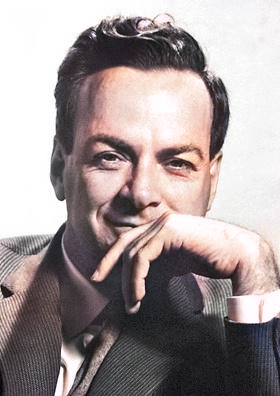 On December 29, 1959, American physicist and Nobel Laureate Richard Feynman at an American Physical Society meeting at Caltech gave a presentation entitled ‘There’s Plenty of Room at the Bottom‘, which is generally considered to be a seminal event in the history of nanotechnology, as it inspired the conceptual beginnings of the field decades later. At SciHi blog, Richard Feynman already is some sort of an old acquaintance.[3] Not only that he was a divinely gifted lecturer and tutor, he also made significant contributions to quantum mechanics and quantum electrodynamics for which he finally received the Nobel Prize in Physics in 1965. In a 1999 poll of 130 leading physicists worldwide by the British journal Physics World he was ranked as one of the ten greatest physicists of all time.

“What I want to talk about is the problem of manipulating and controlling things on a small scale.”
– Richard Feynman, There’s Plenty of Room at the Bottom (1959)[2]

The Birth of Nanotechnology

Today’s article focusses on Richard Feynman’s famous 1959 talk on top-down nanotechnology. Feynman considered a number of interesting ramifications of a general ability to manipulate matter on an atomic scale. In particular, he was interested in the possibilities of denser computer circuitry, and microscopes which could see things much smaller than is possible with scanning electron microscopes. These ideas were later realized by the use of the scanning tunneling microscope, the atomic force microscope and other examples of scanning probe microscopy. Feynman also suggested that it should be possible, in principle, to make nanoscale machines that “arrange the atoms the way we want“, and do chemical synthesis by mechanical manipulation. Today, this technology is called “e-beam lithography”. Feynman proposed shrinking computing devices toward their physical limits, where “wires should be 10 or 100 atoms in diameter”. Today, Feynman’s 100 atoms limit for a wire already has become reality. But, when Feynman spoke, a single computer could fill an entire room.

“In the year 2000, when they look back at this age, they will wonder why it was not until the year 1960 that anybody began seriously to move in this direction.”
– Richard Feynman, There’s Plenty of Room at the Bottom (1959)[2]

He also presented the “weird possibility” of “swallowing the doctor,” a concept that involved building a tiny, swallowable surgical robot by developing a set of one-quarter-scale manipulator hands slaved to the operator’s hands to build one-quarter scale machine tools analogous to those found in any machine shop. This set of small tools would then be used by the small hands to build and operate ten sets of one-sixteenth-scale hands and tools, and so forth, culminating in perhaps a billion tiny factories to achieve massively parallel operations. He uses the analogy of a pantograph as a way of scaling down items. Interestingly, this idea already was anticipated in part, down to the microscale, by science fiction author Robert A. Heinlein in his 1942 story Waldo. 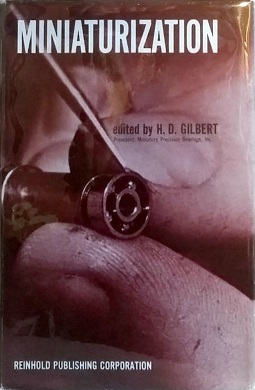 “Why cannot we write the entire 24 volumes of the Encyclopaedia Brittanica on the head of a pin?”
– Richard Feynman, There’s Plenty of Room at the Bottom (1959)[2]

As the sizes got smaller, one would have to redesign some tools, because the relative strength of various forces also would change. Although gravity would become unimportant, surface tension would become more important, Van der Waals attraction would become important, etc. Feynman mentioned all these scaling issues during his talk. At the meeting, Feynman concluded his talk with two challenges, and he offered a prize of $1000 for the first individuals to solve each one. The first challenge involved the construction of a tiny motor, which, to Feynman’s surprise, was achieved by November 1960 by William McLellan, a meticulous craftsman, using conventional tools. The motor met the conditions, but did not advance the art. The second challenge involved the possibility of scaling down letters small enough so as to be able to fit the entire Encyclopædia Britannica on the head of a pin, by writing the information from a book page on a surface 1/25,000 smaller in linear scale. In 1985, Tom Newman, a Stanford graduate student, successfully reduced the first paragraph of A Tale of Two Cities by 1/25,000, and collected the second Feynman prize.

Feynman is also considering whether it would be possible to use physical methods instead of chemical methods to manipulate and produce certain molecules. Feynman admits that chemistry would make such great progress that chemists would be able to synthesize almost any material before such a physical process could be invented. Nevertheless, he believes that the development of such a process is of theoretical interest.

K. Eric Drexler later took the Feynman concept of a billion tiny factories and added the idea that they could make more copies of themselves, via computer control instead of control by a human operator, in his 1986 book Engines of Creation: The Coming Era of Nanotechnology.[5] After Feynman’s death, scholars studying the historical development of nanotechnology have concluded that his role in catalyzing nanotechnology research was not highly rated by many of the people active in the nascent field in the 1980s and 1990s. Chris Toumey,[6] a cultural anthropologist at the University of South Carolina, has reconstructed the history of the publication and republication of Feynman’s talk, along with the record of citations to “Plenty of Room” in the scientific literature