You are here: Home › women in science › Christine Ladd-Franklin and the Theory of Colour Vision 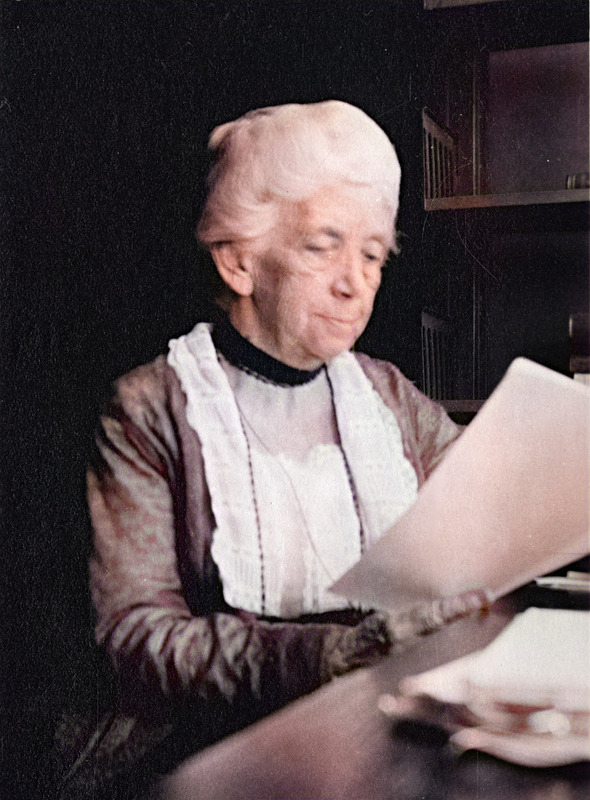 On December 1, 1847, American psychologist, logician, and mathematician Christine Ladd-Franklin was born. She is known for contributions to the theory of color vision accounting for the development of man’s color sense which countered the established views of Helmholtz, Young, and Hering. Her position was that color-sense developed in stages.

Christine Ladd was born in Windsor, Connecticut, to Eliphalet Ladd, a merchant, and Augusta Niles Ladd. She began her higher education at Vassar College, but had to withdraw after only one year due to financial problems. Fortunately, she was able to return after about another year and finish her Bachelors in 1869. After that was accomplished the young woman continued her education unofficially by attending lectures as Washington College, Jefferson College, and probably Harvard, mostly focusing on mathematics. With the great help by mathematician James J. Sylvester, Ladd-Franklin was officially accepted at the newly formed Johns Hopkins University, even though trustees first refused due to her sex. She studied mathematics under Sylvester and symbolic logic under Charles S. Pierce [7] and completed all of the requirements for the Ph.D. at Johns Hopkins in 1882 with a thesis on The Algebra of Logic, but was denied a degree based on her sex until the mid 1920s (when she was 78 years old). [1]

Ladd-Franklin’s first recorded works were published during her years at Vassar. In the London Educational Times, The Analyst: A journal of Pure and Applied Mathematics, and the American Journal of Mathematics she published mathematical formulas between 1873 and 1871. With her dissertation The Algebra of Logic, Ladd-Franklin is considered a pioneer in the study of symbolic logic. During her professional career, the scientist spent a great amount of time in Germany. She conducted research in the laboratories of Georg Müller in Göttingen, and Hermann von Helmholtz [4] in Berlin where her earlier studies in the fields of botany, logic, and biology were united by researching on color vision. [2] In addition to Richard Mark Baldwin, Ladd-Franklin was co-editor of his Dictionary of Philosophy and Psychology (1901-1905), where she wrote contributions under the acronym C. L. F. She tried for a long time in vain to give lectures at Johns Hopkins, which was only allowed from 1904 to 1909.

Difficulties to Obtain an Academic Career

From August 1882 she was married to the mathematics professor Fabian Franklin (1853-1939), with whom she had a daughter, Margaret, who later played an important role in the suffragettes movement. In 1895 her husband gave up his career as a professor and became a journalist. The couple moved to New York City in 1910 when he became co-editor of the New York Evening Post. Ladd-Franklin continued to publish particularly on her color perception theory and gave lectures at Columbia University in 1912-1913, Harvard University in 1913, and the University of Chicago in 1914. However, she was unable to obtain a permanent academic position. However, she lectured at national and international psychological and philosophical congresses.

Christine Ladd-Franklin’s dissertation dealt with the reduction of syllogisms in classical Aristotelian logic and indicated a method for determining the validity of even complicated syllogisms. She described her method as Inconsistent Triad or Antilogism. The triad consists of the premises of syllogism and its negated conclusion. Each two elements of the triad exclude the third.

A Theory of Color Vision

Christine Ladd-Franklin managed to develop her own theory of color vision while proposing that a process existed whereby the ability to perceive color combinations evolved over time. She presented her first findings at the Second International Congress of Psychology in 1892.[1] In her works on color vision, Ladd-Franklin argued that black-white vision was developed first, since it occurs under the greatest variety of conditions. She further explained that the color white, later became differentiated into blue and yellow, with yellow ultimately differentiating into red-green vision. This means that since achromatic vision (black and white) was developed first throughout evolution, the majority of the population are not affected by black-white color blindness in contrast to red-green color blindness as red-green sensitivity was developed last. Ladd-Franklin’s theory was very well-received and remained influential for many years. [2] One of her works on physiological optics is dedicated to the Blue Arc Phenomenon. She wrote a supplement to the English edition of the Handbook of Physiological Optics by Helmholtz in 1924.

Christine Ladd-Franklin returned to the United States and asked to be allowed to lecture at the Johns Hopkins University but her requests were turned down several times. The scientist got active and helped administer the Sarah Berliner fellowships in order to support women who had recent been awarded a Ph.D. in their postdoctoral research. In the early 1900s, Ladd-Franklin was finally allowed to teach logic and philosophy at the Johns Hopkins. However, she was never able to obtain a proper academic post, for these were certainly closed to married ladies. [3]

At yovisto academic video search, you may be interested in a video lecture by Professor Ayliffe on ‘Color Vision‘ at Gresham College.