You are here: Home › mathematics › Gerardus Mercator – The Man who Mapped the Planet 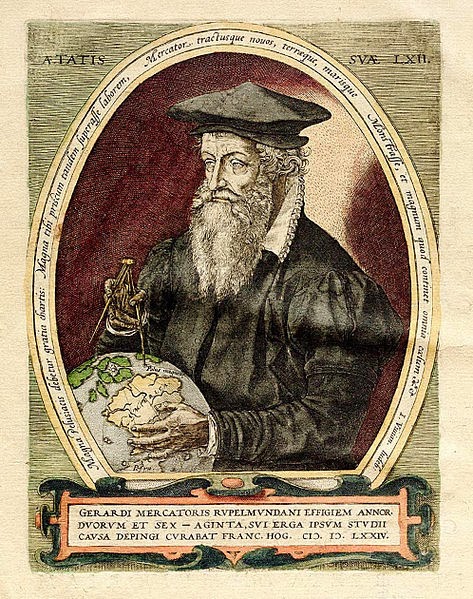 On December 2, 1594, German cartographer, philosopher and mathematician Gerardus Mercator passed away. He is best known for his work in cartography, particular the world map of 1569 based on a new projection which represented sailing courses of constant bearing as straight lines. He was the first to use the term Atlas for a collection of maps.

“Since my youth geography has been for me the primary object of study. When I was engaged in it, having applied the considerations of the natural and geometric sciences, I liked, little by little, not only the description of the earth, but also the structure of the whole machinery of the world, whose numerous elements are not known by anyone to date.”
– Gerardus Mercator, Introduction to Ptolemy’s Geography (1578).

Born as Geert de Kremer on March 5, 1512, in Rupelmonde, County of Flanders (modern day Belgium), the son of a shoemaker was the family’s seventh child and lived in Gangelt during most of his childhood. When the father passed away, Geert and his siblings moved to Herzogenbusch, which is located about 80 km south of Amsterdam. However, they received a good schooling education there and to his teachers belonged the famous humanist and teacher Georgius Macropedius. From 1530, Gerhard studied at the University of Leuven under Gemma Frisius, [4] was awarded a Magister artium in 1532, and subsequently pursued private studies in theology, philosophy and mathematics, especially in their practical applications (maps, globes and instruments). From 1534 to 1537, Mercator was a collaborator of Gemma Frisius in the creation of his terrestrial and celestial globes. Frisius improved measuring instruments and found completely new ways to use mathematical operations to measure parts of the Earth.

In 1537 he created a first map Amplissima Terrae Sanctae descriptio ad utriusque Testamenti intelligentiam. In 1538, Mercator created his very first world map and at the same time, he published a map of Flanders which caused him quite a lot of attention by the King. In 1541, Mercator published his first globe, which sold in large quantities for decades. It is questionable whether Mercator earned his theological doctorate. In 1544 he was arrested for “Lutherey” (i.e. as a supporter of Martin Luther‘s reformation) and imprisoned for many months. [5] 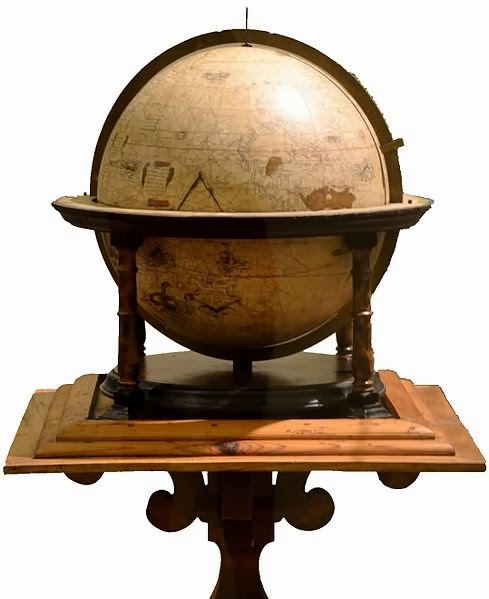 One of the remaining globes
by Mercator

Unfortunately, the scientist was arrested due to heresy in 1544 and stayed in prison for several months. In the meantime, Melanchton’s Masterpiece ‘Initia Doctrinae Physicae‘ was published. The work influenced Mercator critically and both scientists started exchanging letters, which were found just recently. The first celestial globe was released by Mercator in 1551. Both were mostly sold as a pair and even today, about 20 of Mercator’s masterpieces exist. In the following period, Mercator started working as a teacher for mathematics and astronomy in Duisburg. The city’s university was founded after Mercator’s passing, but was named after him due to his significant achievements. One of his grammar school students followed Mercator’s footsteps and created a very accurate and detailed overview of Duisburg.

Mercator achieved world fame with his large world map of 1569 (Nova et aucta orbis terrae descriptio ad usum navigantium). Possibly inspired by Erhard Etzlaub, he developed a projection that is still important for seafaring (and aviation) today because of its angular fidelity, which became known as the “Mercator projection”. According to John Vermeulen, Mercator worked together with his contemporary Abraham Ortelius.[6] The Mercator projection is a form of cylindrical projection, in which the projection is adequately distorted in the direction of the cylinder axis in order to achieve a true angular image of the earth’s surface. The Mercator projection is not a projection in physical terms and therefore cannot be constructed geometrically. Angular fidelity is equivalent to conformity, so that geometric shapes remain undistorted on a small scale. In contrast, the Mercator projection is neither conformal nor directional over large distances, i.e. areas have different scales at different points in the image, and directional angles to distant points are not the same in the plane map and on the sphere, because great circles, as the shortest connections between two points, are not mapped on straight lines. Length fidelity exists only along one or two excellent lines. 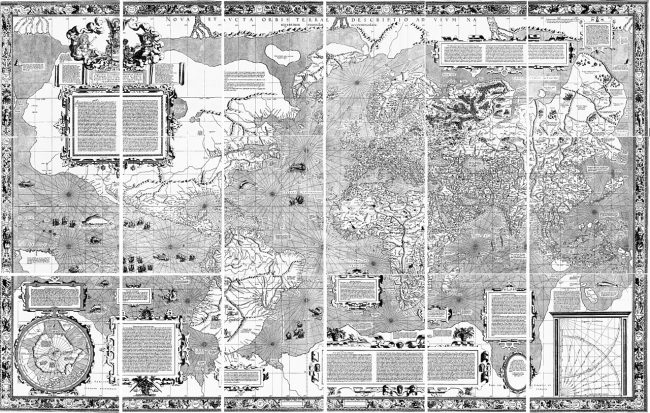 Mercator saw himself more as a scientific cosmographer and not as someone who had to make a living by producing and selling maps. His production was quite extensive: we know of twelve pairs of globes (heaven and earth), five wall maps, many maps of regions, world maps as well as a chronology (with gospel harmony) and cosmography. Many of his works are now exhibited in the treasure chamber of the Kultur- und Stadthistorisches Museum of the City of Duisburg. Mercator’s scientific attitude became his fate. Again and again he postponed the publication of his work in the hope of new information. The cartographic part of his cosmography was therefore only partially completed.

In his later years, Mercator published a few philosophical works as well as a few theological writings like the world history ‘Chronologia‘. Further cartographic work was followed in 1590 by the commentary of the Epistle to the Romans, which so far only exists as a manuscript in Leiden, in which he worked out the theological and systematic foundations for his cosmography. In 1563, the Chronologia was listed by the Catholic Church as a forbidden book in the appendix to the Council of Trent. Just before his death, Mercator finished his famous work, ‘Atlas, sive Cosmographicae Meditationes de Fabrica Mundi et fabricati figura’ which was published by his son posthumously. Mercator died in 1594 as a respected and rich man

At yovisto academic video search, you may enjoy a short documentary on Gerardus Mercator, his achievements and influence thoughout his life time and beyond.