You are here: Home › biology › Christian de Duve and the Cell Organelles 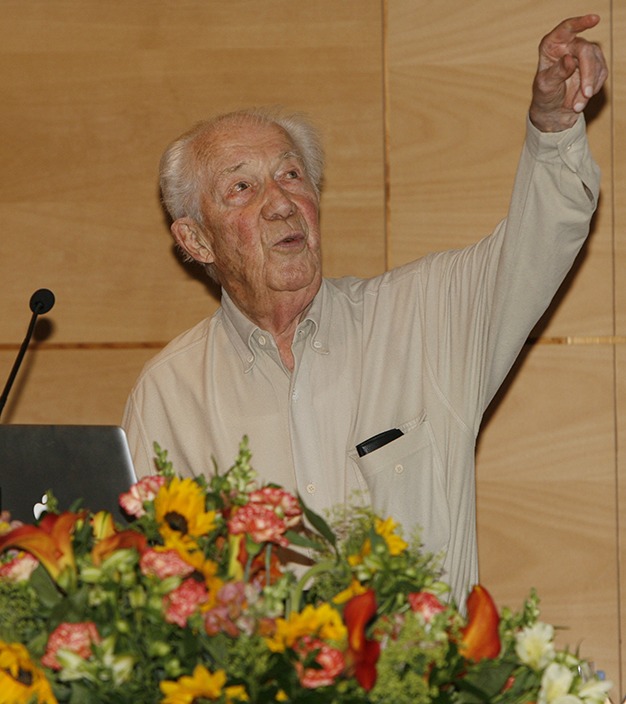 On October 2, 1917, Belgian cytologist, biochemist and Nobel Laureate Christian de Duve was born. Duve made serendipitous discoveries of two cell organelles, peroxisome and lysosome, for which he shared the Nobel Prize in Physiology or Medicine in 1974 with Albert Claude and George E. Palade.

Christian de Duve was born as son of Belgian shopkeeper Alphonse de Duve and wife Madeleine Pungs in the village of Thames Ditton, near London. In 1920, after the end of the war, the de Duve family returned to Belgium, where Christian was educated by the Jesuits at Onze-Lieve-Vrouwinstituut in Antwerp, before studying at the Catholic University of Leuven in 1934. He wanted to specialize in endocrinology and joined the laboratory of the Belgian physiologist Joseph P. Bouckaert. During his last year at medical school in 1940, the Germans invaded Belgium. He was drafted to the Belgian army, and posted in southern France as medical officer.

He was almost immediately taken as prisoner of war by Germans, but was able to escape back to Belgium to continue his medical course, and obtained his MD in 1941 from Leuven. His primary research was on insulin and its role in glucose metabolism. He made an initial discovery that a commercial preparation of insulin was contaminated with another pancreatic hormone, the insulin antagonist glucagon. However, laboratory supplies at Leuven were in shortage, he therefore enrolled in a programme to earn a degree in chemistry at the Cancer Institute. His research on insulin was summed up in Glucose, Insuline et Diabète published in 1945, which he condensed into a technical dissertation. He subsequently obtained MSc in chemistry in 1946, for which he worked on the purification of penicillin.

To enhance his skill in biochemistry, de Duve worked Nobel Medical Institute in Stockholm and subsequently supported by the Rockefeller Foundation at Washington University in St. Louis. He returned to Louvain in March 1947 to take over the teaching of physiological chemistry at the medical faculty of the Catholic University of Leuven, becoming full professor in 1951. In 1962, upon an offer of the president of the Rockefeller Institute (what is now Rockefeller University) of New York City, de Duve simultaneously headed the research laboratories at Leuven and at Rockefeller University, dividing his time between New York and Leuven.

De Duve was the first to hypothesise that production of insulin to decrease blood sugar level stimulated the uptake of glucose in the liver, and that there is a balanced production of insulin and glucagon, a peptide hormone, produced by alpha cells of the pancreas, to maintain normal blood sugar level. De Duve’s idea was ridiculed at the time, but his rediscovery of glucagon confirmed his ideas. In 1953 he experimentally demonstrated that glucagon did influence the production and thus uptake of glucose. In 1955 Christian de Duve discovered previously unknown organelles in the cell, lysosomes. These have important functions in decomposing different types of materials, such as bacteria and parts of cells that have worn out. To microscopists in the early 20th century, the sheer number of components in a living cell made it appear a jumbled, indecipherable mass.

In 1930s, a technique referred to as cell fractionation was introduced, later perfected by Christian de Duve and others, to separate the functional parts of a cell and thus allow for clearer examination with powerful electron microscopes. Cell fractionation involves grinding cells in order to break the cell membrane and then sorting the released contents by mass and weight through precisely calibrated cycles of centrifugation.[3] The lysosome obtained a morphological identity in 1955 as a result of a brief collaboration with Alex Novikoff, a visiting scientist from the Albert Einstein College of Medicine in New York, who had expertise in electron microscopy. Novikoff’s micrographs showed that the “light mitochondrial” fraction contained membrane bounded “dense bodies” similar to those present in the peri-canalicular region of hepatocytes.[4]

After confirmation of lysosome, de Duve’s team was troubled by the existence of another enzyme urate oxidase in rat liver cell fraction. He was convinced that it did not belong to lysosome because it is not an acid hydrolase, typical of lysosomal enzymes, but still had similar distribution as acid phosphatase. In 1960 he further found that other enzymes such as catalase and D-amino acid oxidase were similarly distributed in cell fraction, and they were believed to be mitochondrial enzymes. De Duve work has contributed to the emerging consensus that the endosymbiotic theory is correct; the idea which proposes that eukaryotic cell organelles originated as prokaryotic cells, which came to live inside eukaryotic cells as endosymbionts. According to his own version, eukaryotic cells with their structures and properties, including their ability to capture food by endocytosis and to digest it intracellularly, were developed first. Later prokaryotic cells were incorporated to form more organelles.

In 1971 de Duve was elected to the American Academy of Arts and Sciences. Since 1973 he was a member of the German Academy of Natural Scientists Leopoldina, and since 1975 a member of the National Academy of Sciences. In 1988 he was elected a foreign member of the Royal Society, and in 1991 he was accepted into the American Philosophical Society. In 1974 he received, together with Claude and Palade, the Nobel Prize in Physiology or Medicine for his investigations into the structure and function of the organization of the cell. In the same year he founded the International Institute for Cell and Molecular Pathology (ICP) in Brussels, in whose management he was involved until his death. De Duve died on 4 May 2013 by legal euthanasia.