You are here: Home › geography › Wladimir Köppen and the Köppen Climate Classification System

On September 25, 1846, Russian-German geographer, meteorologist, climatologist and botanist Wladimir Peter Köppen was born. His most notable contribution to science was the development of the Köppen climate classification system, which, with some modifications, is still commonly used. Köppen made significant contributions to several branches of science.

Wladimir Peter Köppen was born in Russia as the son of German parents, Peter von Köppen and Alexandrine, née von Adelung, and went to school in the Crimea. Already at that time he was interested in the connection between plants and the climate zones in which they grow. Later Wladimir Köppen studied botany at the University of Sr. Petersburg. In 1867, Köppen switched to the University of Heidelberg and earned his doctorate degree for his dissertation on the effects of temperature on plant growth at the University of Leipzig in 1870. From 1872 to 1875 he worked in St. Petersburg at the Russian Meteorological Service and was also secretary of the Russian Geographical Society. In 1875 he moved back to Germany and became head of the then newly created maritime weather service at the German Naval Observatory in Hamburg, where he was employed until 1919. At Hamburg, Köppen was responsible for establishing a weather forecasting service for the northwestern part of Germany and the adjacent sea areas.

However, Köppen left service after about four years to continue his research. He started a  systematic study of the climate and also experimented with balloons to obtain data from upper layers of the atmosphere. He published the first version of his map of climatic zones in which the seasonal temperature ranges were plotted.This work led to the development of the Köppen climate classification system around 1900, which he kept improving for the rest of his life. The full version of his system appeared first in 1918 and, after several modifications, the final version was published in 1936. His work Geographical System of Climates  represents the first objective climate classification of the earth and is still of great importance today.  In it, Köppen identified five major climatic groups, which correspond with the five main vegetation groups: 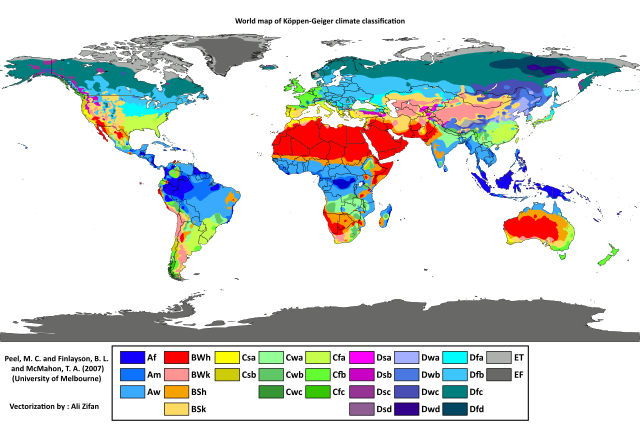 Along with Alfred Wegener,[5] Wladimir Köppen also researched in the field of  paleoclimatology. Together the scientists published a paper titled Die Klimate der Geologischen Vorzeit (The climates of the geological past), which provided support for the Milanković theory on ice ages. In 1911, Köppen co-wrote the successful textbook The Thermodynamics of the Atmosphere. In later years, Wladimir Köppen also cooperated with the German climatologist Rudolf Geiger to create a five-volume work titled Handbuch der Klimatologie (Handbook of Climatology). Even though the entire work has never been completed, three separate parts produced by Wladimir Köppen were published. Overall, Köppen has published more than 500 papers, most of them dealing with the meteorological securing of ocean shipping and the climatic conditions of the oceans and continents. Köppen also supported the planned language Esperanto and published articles in this language in Scienca Revuo and Germana Esperantisto. In 1940, Köppen past away, but Rudolf Geiger continued to work on modifications to the climate classification system.