You are here: Home › medical science › Charles Nicolle and the Transmission of Typhus 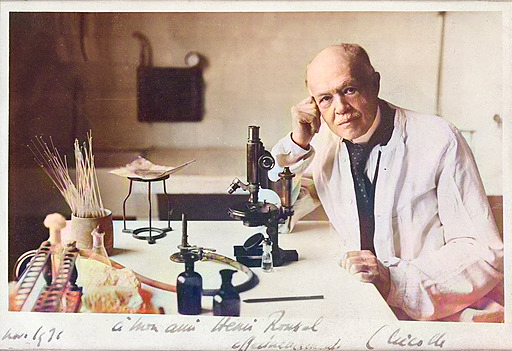 On September 21, 1866, French bacteriologist Charles Juley Henry Nicolle was born. Nicolle was awarded the 1928 Nobel Prize in Medicine for his identification of lice as the transmitter of epidemic typhus.

Charles Nicolle was the second of three sons of the French doctor Eugène Nicolle to be born in the northern French town of Rouen. His mother was the daughter of a local watchmaker. Nicolle attended the Lycée Pierre Corneille in Rouen and moved to Paris, where he completed his studies in 1893 and obtained his doctorate at the “Pasteur Institute” under Émile Roux with a bacteriological thesis on Chancroid (Recherches sur le chancre mou). Back in Rouen, he worked at the Hospital and the School of Medicine and devoted himself mainly to dermatology and syphiligraphy. Head of the bacteriology and serotherapy laboratory at the Faculty of Medicine in 1896, he tried unsuccessfully to open a microbiology teaching centre. In 1898, he founded a sanatorium with his friends André Halipré and Joseph Cotoni in Oissel. However, its main activity remains the fight against venereal diseases.

The Transmitting Agent for Epidemic Typhus

Nicolle succeeded  Adrien Loir as Director of the Pasteur Institute in Tunis in 1903. There, he achieved his major scientific work and did his Nobel Prize-winning work on typhus. He also brought Hélène Sparrow with him as laboratory chief. His discovery that lice could be transmitter epidemic typhus came from his observation that while epidemic typhus patients were able to infect other patients inside and outside the hospital, and their very clothes seemed to spread the disease, they were no longer infectious when they had had a hot bath and a change of clothes. After realizing that the patient’s clothes were the main factor for disease transmission, Nicolle reasoned that it was most likely that lice were the vector for epidemic typhus.

Charles Nicolle proceded to test his theory by infecting a chimpanzee with typhus. He then retrieved lice from the sick chimpanzee and placed it on a healthy one. Nicolle found that after 10 days the healthy chimpanzee was also infected with the disease. He repeated the experiment several times and became sure that lice were the carriers of typhus.

The Difficult Development of a Vaccine

After that revolutionary discovery, Nicolle believed that he could make a simple vaccine by crushing up the lice and mixing it with blood serum from recovered patients. Nicolle tried out the vaccine on himself and after apparently staying healthy he experimented further and this time tried his vaccines on children. They did develop typhus but were able to recover. However, Charles Nicolle was not able to develop a practical vaccine, a milestone that was achieved by Rudolf Weigl in 1930.

Nicolle was awarded the Nobel Prize in Physiology or Medicine in 1928 “for his work on typhus”, and was elected a member of the Academy of Sciences in 1929.