You are here: Home › geology › Sir Richard John Griffith and the Geological Map of Ireland 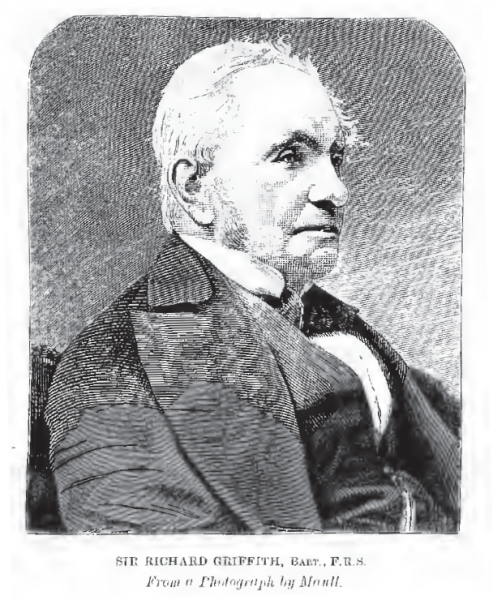 On September 20, 1784, Irish geologist and mining engineer Sir Richard John Griffith was born. Griffith sometimes has been called the “father of Irish geology.” He completed the first complete geological map of Ireland and was author of the valuation of Ireland – known ever since as Griffith‘s Valuation.

Richard John Griffith was born in Hume Street, Dublin, Ireland, the son of Richard Griffith M.P. of Millicent House and Charity Yorke Bramston. He went to school in Portarlington, then in Rathangan, and studied in Edinburgh.

In 1799 he obtained a commission as a lieutenant in the Royal Irish Artillery in 1799, but a year later, when the corps was incorporated with that of England, he retired, and devoted his attention to civil engineering and mining. He studied chemistry, mineralogy and mining for two years in London under William Nicholson, editor of the Journal of Natural Philosophy, and afterwards examined the mining districts in various parts of England, Wales and Scotland. While in Cornwall he discovered ores of nickel and cobalt in material that had been rejected as worthless. He completed his studies under Robert Jameson and others at Edinburgh, he acquitted himself with such distinction at Edinburgh that he was elected a fellow of the Royal Society of Edinburgh in 1807, when he was only twenty-three years old. In 1808 he was elected a member of the newly established Geological Society of London in 1808, and in the same year he returned to Ireland.

Engineer and Geologist in Ireland

In 1809 he received his first public appointment as engineer to the commission for inqiring into the nature and extent of the bogs in Ireland, and in the same year he was appointed mining engineer and professor of geology to the Royal Dublin Society in 1812. Shortly afterwards he expressed his intention of preparing a geological map of Ireland. During subsequent years he made many surveys and issued many reports on mineral districts in Ireland, and these formed the foundation of his first geological map of the country in 1815. In 1822 Griffith became engineer of public works in Cork, Kerry and Limerick, and was occupied until 1830 in repairing old roads and in laying out many miles of new roads in some of the most inaccessible parts of the country.

Meanwhile, in 1825, he was appointed by the government to carry out a boundary survey of Ireland. He was to mark the boundaries of every county, barony, civil parish and townland in preparation for the first Ordnance Survey. He was also called upon to assist in the preparation of a parliamentary bill to provide for the general valuation of Ireland. This act was passed in 1826, and he was appointed Commissioner of Valuation in 1827, but did not start work until 1830 when the new 6″ maps became available from the Ordnance survey and which he was required to use as provided for by statute. He continued to work on this until 1868. On Griffith’s valuation the various local and public assessments were made.

Griffith’s particular interest in the Carboniferous Limestone rocks led him to amass a large collection of fossils from the formation; and he employed Frederick McCoy, a young paleontologist, to describe them in a well-illustrated and valuable publication, A Synopsis of the Characters of the Carboniferous Limestone Fossils of Ireland, published in 1844 at Griffith’s own expense. This was followed by a similar work on the Silurian fossils of Ireland, collected by Griffith and described by McCoy.[3]

The Geological Map of Ireland

His extensive investigations furnished him with ample material for improving his geological map, and the second edition was published in 1835, followed by a map with a smaller scale. This third edition was published in 1839 by the Board of Ordnance and re-issued in 1855. In 1850 he was appointed chairman of the Irish building authority. In recognition of his great work and other scientific achievements, the Geological Society awarded him the Wollaston Medal in 1854, and in 1858 he was promoted to Baronet.

Richard John Griffith died on 22 September 1878 in his 95th year. At the time of his death, he was the oldest surviving fellow of the Geological Society of London.