You are here: Home › inventor › Carl von Linde’s Breakthrough in the Refrigeration Process 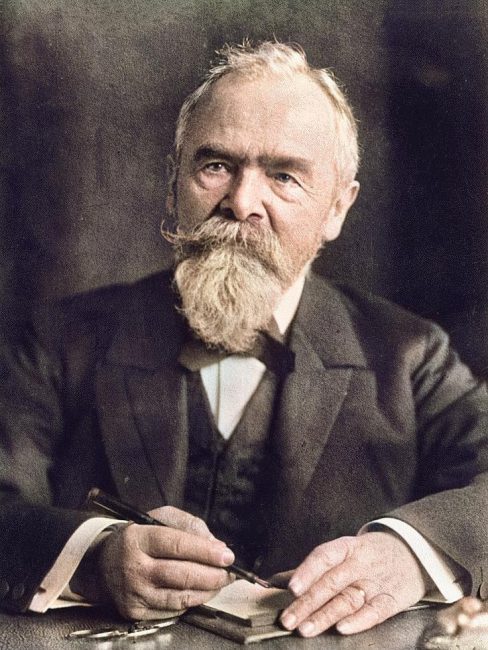 On June 11, 1842, German scientist, engineer, and businessman Carl von Linde was born. Von Linde discovered a refrigeration cycle and invented the first industrial-scale air separation and gas liquefaction processes. These breakthroughs laid the backbone for his 1913 Nobel Prize in Physics.

Born in Berndorf, Germany as the son of a German-born minister and Swedish mother, Carl von Linde was expected to follow in his father’s footsteps, but took another direction entirely. In 1854 the family moved to Munich, Bavaria, and eight years later Carl von Linde started to study engineering at the Swiss Federal Institute of Technology in Zürich, Switzerland. However, he was expelled in 1864 for participating in student protests. Soon, von Linde was apprenticed at the Kottern cotton-spinning plant in Kempten  before first moving to Borsig and later to Berlin. At the Krauss locomotive factory in Munich, he became head of the technical department. When Carl von Linde heard that the Technical University in Munich would open soon, he successfully applied for a job as a lecturer. In 1872 he became full professor of mechanical engineering and managed to set up an engineering lab. There, Rudolf Diesel became one of his students.[5]

In 1871 Linde published an essay on improved refrigeration processes in the Bavarian Industry and Trade Journal. Many breweries were interested in it, and Linde soon supplied them with the new machines on which he was constantly working. Linde laid the foundations for modern refrigeration technology. In 1871 he designed a refrigerating machine working with methyl ether (dimethyl ether), which he had manufactured at Maschinenfabrik Augsburg (MAN). The second generation of refrigeration machines, which followed in 1876, worked with ammonia. The principle of cooling gas, which had previously done mechanical work, was common to both. In 1873, a competition for a cooling plant for the crystallization of paraffin was an incentive for the university teacher to build a cooling machine that allowed fermentation at a constant temperature when brewing beer. Breweries throughout Europe were promptly interested in the new refrigeration technology: as the first turners in Trieste in 1877, the Actien brewery in Mainz, Spaten in Munich, Heineken in the Netherlands, Carlsberg in Denmark.

In 1879, von Linde gave up his teaching post and, together with two brewers and three other founders, founded the Gesellschaft für Linde’s Eismaschinen AG (today Linde AG). Unlike the other shareholders, he brought no capital into the company, but his patents. After a relatively short time, the company became the European leader in refrigeration technology. A mild winter in 1883/1884 had a favorable effect: There was a shortage of natural ice, which was needed for temperature-controlled fermentation with bottom-fermented yeast. Previous reservations of the brewers against artificial ice had melted away, refrigerators were suddenly in demand, and Linde delivered immediately. Linde even had refrigerated warehouses for foodstuffs and several ice factories built by Linde itself little by little. His process was also in demand on ice rinks, in dairies and in the liquefaction of chlorine and carbon dioxide, and the company flourished. By 1890, von Linde had sold more than 700 machines.

In 1892, von Linde received an order from the Guinness brewery in Dublin for a carbon dioxide liquefaction plant. This further sparked von Linde’s interest in research and he began to analyze the area of low-temperature refrigeration. In 1894 he began working on the process for the liquefaction of air. By 1895 he achieved first results and filed for a patent which was granted to him in 1903. In 1901, Linde began work on a technique to obtain pure oxygen and nitrogen based on the fractional distillation of liquefied air. By 1910, coworkers including Carl’s son Friedrich had developed the Linde double-column process, variants of which are still in common use today.

In 1895 he became a member of the board of trustees of the Physikalisch-Technische Reichsanstalt and in 1896 a member of the Bavarian Academy of Sciences. He joined the Göttingen Association for Applied Physics and Mathematics – the intellectual forerunner of the Kaiser Wilhelm Society – in 1898. Linde was awarded the Order of Merit of the Bavarian Crown by Prince Regent Luitpold in 1897 and was elevated to personal nobility on the basis of the order’s statutes. In 1907 he received the Order of Maximilian. In 1916 he was the first laureate of the Siemens Ring. In 1918 he was awarded the Order of Pour le Mérite for Science and the Arts.From around 1910 Linde started transferring responsibility for the company’s operation to his sons Friedrich and Richard and to his son-in-law Rudolf Wucherer. He continued with supervisory board and advisory duties until his death in November 1934.