You are here: Home › history › The Legendary Annual Boat Race of Oxford and Cambridge

Start of the Oxford Boat Race

On June 10th 1829 the very first of now legendary annual boat races of Oxford and Cambridge on the river Thames took place. The race came about because two friends from Harrow School, Charles Wordsworth (nephew of the poet William Wordsworth and later bishop of St Andrews), of Christ Church College, Oxford, and Charles Merrivale of St. John’s, Cambridge, met during the vacation in Cambridge, where Wordsworth’s father was master of Trinity.[1] Wordsworth went rowing on the river Cam, and the two school fellows decided to set up a challenge.

Cambridge challenged Oxford to a race at Henley-on-Thames stating ‘that the University of Cambridge hereby challenge the University of Oxford to row a match at or near London, each in an eight-oared boat during the ensuing Easter vacation.’ In the end, Oxford won this first race easily. The second race occurred in 1836, with the venue moved to be from Westminster to Putney. Over the next couple of years, there was disagreement over where the race should be held, with Oxford preferring Henley and Cambridge preferring London. 1856 was the first in what was to become an uninterrupted series of annual races, save the gaps during the two world wars.

A portrayal of the dead heat finish in 1877.

The races not always run safely.In the 1912 race, run in extremely poor weather and high winds, both crews sank. Oxford rowed into a significant early lead, but began taking on water, and made for the bank shortly after passing Hammersmith Bridge to empty the boat out: although they attempted to restart, the race was abandoned at this point because Cambridge had also sunk, while passing the Harrods Depository. Cambridge also sank in 1859 and 1978, while Oxford did so in 1925, and again in 1951. In 1984 the Cambridge boat sank after colliding with a barge before the start of the race. 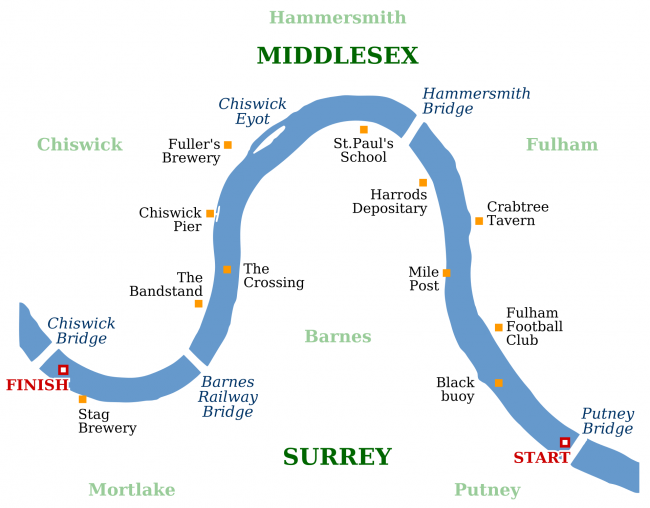 In 2012 Cambridge won the race after one of the most eventful races in history. You might watch some video newsreel footage of the boat race from the early 1930s, which comes from YouTube.