You are here: Home › chemistry › Carl Bosch, the Synthesis of Ammonia, and the IG Farben 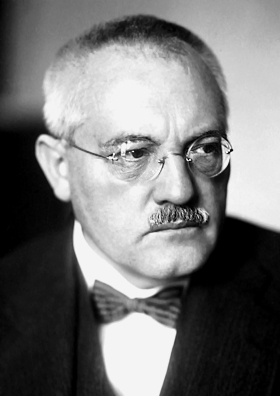 On August 27, 1874, German chemist, engineer and Nobel Laureate Carl Bosch was born. He was a pioneer in the field of high-pressure industrial chemistry and founder of IG Farben, at one point the world’s largest chemical company.

Carl Bosch was born in Cologne, Germany, the first of seven children of Carl Bosch senior (1843-1904), co-owner of the installation company Bosch & Haag in Cologne, and his wife Paula (1851-1930). Carl Bosch showed a talent for science and technology at an early age. He worked as a locksmith and precision mechanic in his father’s company and received appropriate training. After graduating from the secondary school in Cologne in March 1893, he began a practical year at the Marienhütte in Kotzenau near Liegnitz in Silesia to improve his knowledge of metallurgy. He worked for a year in the molding shop, locksmith shop and model carpenter shop, where he was trained as a craftsman. He completed his studies in mechanical engineering and metallurgy at the Technical University of Charlottenburg in 1896.

Graduation and Work at BASF

During his studies, Bosch’s interest in chemistry evolved and he continued his education at Leipzig University reading chemistry. With a paper on organic chemistry, Carl Bosch graduated in 1898 with a thesis on “On the condensation of disodium acetone dicarboxylic acid diethyl ester with bromacetophenone” and continued his career at the Badische Anilin- und Sodafabrik (BASF) in Ludwigshafen where he actively participated in the development of synthetic indigo under the guidance of Dr. Rudolf Knietsch. In 1908, the company he worked for acquired the process of high-pressure synthesis of ammonia, which had been developed the Technical University of Karlsruhe.

Bosch initially worked in the phthalic acid plant, which he was commissioned to expand. By chance, he was entrusted with examining Wilhelm Ostwald’s patent for the representation of ammonia from the elements he had offered BASF. Bosch was able to prove that the ammonia formed came from the iron nitride of the catalyst. In 1909, BASF commissioned Bosch to bring the ammonia synthesis previously discovered by Fritz Haber up to the level of industrial production, which involved the construction of plant and apparatus and working at high gas pressure and high reaction temperatures. They also had to construct safe high-pressurized blast furnaces in order to produce and clean the gases necessary for the synthesis of ammonia.

Step by step, Bosch managed to create a large scale industry around the process of high-pressure synthesis of ammonia. The next step was to make ammonia available for the industry, which Bosch also contributed to. After the First World War, Bosch participated in the 1918 armistice negotiations in Spa and Versailles as an economic advisor. Already at the beginning of the century and during the First World War, interest groups were formed in the chemical industry, around 1904 the interest group of the German tar dyes industry on the initiative of Carl Duisberg. At the instigation of Bosch, BASF resumed its efforts to merge the major chemical industry after the First World War and intensified these efforts in the 1920s. While Duisberg, Chairman of the Board of Management of Bayer AG, advocated a holding structure, Bosch sought to merge the companies.

On December 2, 1925, Bosch achieved its goal by founding “Interessengemeinschaft Farbenindustrie,” or I.G. Farben for short, by merging BASF with the companies Hoechst, Bayer, Agfa, the tar color factories Dr. E. ter Meer & Cie, and Griesheim-Elektron to form what was then the world’s largest chemical group. Bosch was appointed Managing Director of the Badische Anilin- und Sodafabrik in 1919 and in 1925 he became Principal of the I.G. Farbenindustrie Aktiengesellschaft. In the mid 1930s, Bosch became chairman of the company. In 1931 he was awarded the Nobel Prize for Chemistry, jointly with Friedrich Bergius, for their contributions to the invention and development of chemical high pressure methods.

Bosch had an ambivalent attitude toward National Socialism. At the beginning he said about Hitler: “You only have to look at him to know” and thus expressed his rejection of Hitler. Later he praised Hitler again as “the man who was the first to clearly recognize unemployment as the cardinal problem of economic hardship and was the only one to take measures to overcome it“.  In 1933, I.G. Farben with Bosch as their chairman supported the NSDAP in the election campaign with 400,000 Reichsmarks – the highest single donation made by German industry to this party this year – in order to pave the way for the subsequent contracts. The National Socialists’ self-sufficiency efforts for a Germany independent of raw materials and the beginning of the arms industry promoted or saved Bosch’s favorite projects, the production of synthetic rubber (Buna) and synthetic gasoline.

Stepping back from the Leader Board

Carl Bosch particularly rejected anti-Semitic legislation and campaigned for Jewish scientists to remain in Germany. As an industrialist with a German nationalist attitude, Bosch did not initially reject the seizure of power, but experienced that Hitler was not accessible to rational arguments. That’s why he didn’t have a very good relationship with Hitler. In 1935, under pressure from the Nazi regime, Bosch gave up his chief position on I.G. Farben’s board. In 1937 he took over the presidency of the Kaiser Wilhelm Society from Max Planck.[4] In 1939 the development of nylon and perlon began in cooperation with DuPont.[5]

Bosch was seriously depressed, not least because of the loss of his chief post and political developments in Germany, and attempted suicide in 1939. He died one year later, on April 26, 1940, in Heidelberg.

Chemistry Matters: Beyond the Textbook, [6]