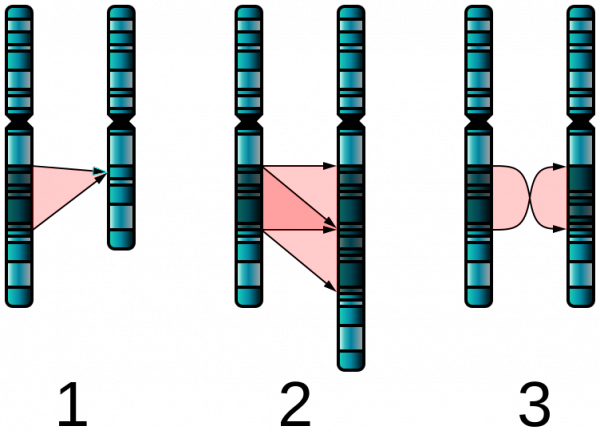 Deletion (1), duplication (2) and inversion (3) are all chromosome abnormalities that have been implicated in autism

On August 28, 1903, Austrian-born American child psychologist and writer Bruno Bettelheim was born. The controversially discussed Bettelheim gained an international reputation for his work on Freud, psychoanalysis, and emotionally disturbed children. He was a revered author of influential clinical studies on the lives of autistic children as well as popular Freudian interpretations of myth and fairy tale; and founder of the Orthogenic School of psychoanalysis in Chicago.

Bruno Bettelheim grew up in a wealthy Viennese family, his father was a sawmill owner. Bettelheim was already interested in psychoanalysis at the age of fourteen. Soon he moved in a circle around Sigmund Freud and attended his lectures.[7] He first studied German literature and then art history at the University of Vienna. Finally he finished his studies of philosophy. In 1938 he submitted his dissertation The Problem of Natural Beauty and Modern Aesthetics, which dealt with Kant‘s philosophy. It is believed that he paused his studies to help out at his family’s sawmill. Back then, Bettelheim and his wife supposedly took care of Patsy, an American child he later described as autistic.

Around 1938, Nazi authorities sent Bruno Bettelheim and other Austrian Jews to the Dachau and Buchenwald concentration camps. He probably met the social psychologist Ernst Federn at Buchenwald. In April 1939, he was released, but drew on the experience of the concentration camps for some of his later work. In the same year, the scientist arrived by ship as a refugee in New York City in late 1939 to join his wife Gina, who had already emigrated. He later moved to Chicago by himself, became a naturalized U.S. citizen in 1944 and married an American woman.

The one-year stay in the German concentration camps Dachau and Buchenwald changed the life and later psychological work of Bettelheim dramatically. After emigrating to America in 1939, he documented the experiences with other former concentration camp prisoners for three years. Only from a distance of several years did he dare to work out and analyse, in which he made a conscious effort to be objective (Individual and Mass Behavior in Extreme Situations, 1943).

U. S. Emigration and Work with Emotionally Disturbed Children

Bruno Bettelheim was appointed professor of psychology at the University of Chicago, where he taught from 1944 until his retirement in 1973. The details of Bettelheim’s professional training and education have been topic of discussion for many years. Apparently, he implied often that he had written a PhD dissertation in the philosophy of education. However, his actual PhD was in art history, and he had probably only taken three introductory courses in psychology.

Bettelheim served as Director of the University of Chicago’s Sonia Shankman Orthogenic School, a home that treats emotionally disturbed children. The institution had been named by him in order to make the children less stigmatized for their later career. One of his main focuses there was the treatment of autistic children, in which he developed his own psychoanalytical theory about the cause and genesis of autism. There he set up an environment for milieu therapy, in which children could form strong attachments with adults within a structured but caring environment. He claimed considerable success in treating some of the emotionally disturbed children. He wrote books on both normal and abnormal child psychology and became a major influence in the field, widely respected during his lifetime.

He was elected a Fellow of the American Academy of Arts and Sciences in 1971. In The Uses of Enchantment, Bruno Bettelheim analyzed fairy tales in terms of Freudian psychology. He suggested that traditional fairy tales, with the darkness of abandonment, death, witches, and injuries, allowed children to grapple with their fears in remote, symbolic terms. If they could read and interpret these fairy tales in their own way, he believed, they would get a greater sense of meaning and purpose. He further believed that by engaging with these socially-evolved stories, children would go through emotional growth that would better prepare them for their own futures.

Bettelheim’s theories on autism have been discussed controversially. His reported rates of cure have been questioned, with critics stating that his patients were not actually suffering from autism. Further, Bettelheim related the world of autistic children to conditions in concentration camps. He was a proponent of the “refrigerator mother” theory of autism, believing that autistic behaviors stem from the emotional frigidity of the children’s mothers. Subsequently, medical research has provided greater understanding of biological basis of autism and other illnesses. Scientists such as Bernard Rimland challenged Bettelheim’s view of autism by arguing that autism is a neurodevelopmental issue. However, Bettelheim’s theory of the psychogenesis of autism is considered obsolete today.

Bettelheim died a suicide, depressed after the death of his wife in 1984 and after suffering a stroke in 1987. His reputation was subsequently clouded by revelations that he had invented his Viennese academic credentials and that he had abused and misdiagnosed a number of the children under his care at the Orthogenic School.

The world needs all kinds of minds – Temple Grandin, [8]