You are here: Home › chemistry › Wallace Hume Carothers and the Invention of Nylon 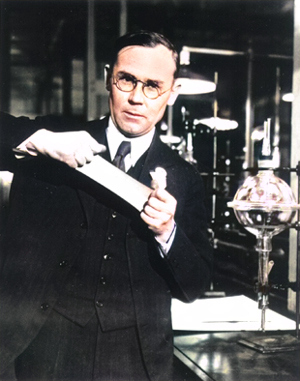 On April 27, 1896, American chemist and inventor Wallace Hume Carothers was born. He is credited with the invention of nylon, the first synthetic polymer fibre to be spun from a melt. Carothers produced this polyamide, by condensation of adipic acid and hexamethylenediamine working for the DuPont chemical company  as head of organic chemistry research.

“Living in the midst of abundance we have the greatest difficulty in seeing that the supply of natural wealth is limited and that the constant increase of population is destined to reduce the American standard of living unless we deal more sanely with our resources.”
– Wallace Hume Carothers

Wallace Carothers was born in Burlington, Iowa, to Ira and Mary Evalina Carothers, as the oldest of four children. Already in his youth, Carothers was fascinated by tools and mechanical devices and spent many hours experimenting. He attended public school in Des Moines, Iowa, and enrolled in the Capital City Commercial College in Des Moines, where his father was Vice-President, completing the accountancy and secretarial curriculum in July 1915.

Then, in September 1915, he entered Tarkio College in Missouri and switched his main subject to chemistry. Actually, Carothers so excelled in chemistry that before graduation he was made a chemistry instructor and studied for as well as taught the senior course. He graduated from Tarkio in 1920 with a bachelor of science degree, and continued his master of arts degree at the University of Illinois, where he also earned his PhD in 1924. He specialized in organic chemistry and minored in physical chemistry and mathematics.

From Harvard to Dupont

For a short time Carothers taught at the University of Illinois and at Harvard University. Because he preferred research to teaching, Carothers accepted a position with Du Pont in 1928 to work on a basic research program. Until then, DuPont had simply bought the technologies developed by others. But, in order to diversify, DuPont decided to make a commitment to fundamental, pure research: research not deliberately aimed at the development of a money-making product. Carothers was asked to research polymer chemistry.[1]

The decision to leave academia was difficult for Carothers. At first he refused DuPont’s offer of employment considering the limited amount of freedom in his research with a commercial company. However, DuPont executive Hamilton Bradshaw, traveled to Harvard and convinced Carothers to change his mind. The offer of an initial salary of $500 a month as compared with only $267 at Harvard might also have been a further incentive. Carothers distinguished himself with his enthusiasm, creativity, and ability to bring out the best in the people working for him. When Carothers began working at the DuPont Experimental Station, his first task was the synthesis of a polymer with a molecular weight of more than 4,200. Unfortunately, Carother’s research group was not able until the middle of 1929 to produce a polymer with a weight of much over 4,000. When in 1930, Elmer K. Bolton became assistant chemical director in the chemical department, he demanded that Carother’s group should present practical results whithin the year.

Bolton asked Carothers to examine the chemistry of an acetylene polymer with the goal of creating synthetic rubber. In April 1930 chloroprene has been isolated, a liquid which polymerized to produce a solid material that resembled rubber and which we know today as Neoprene. In the same year, Dr. Julian Hill, another member of the Carothers team, succeeded to produce a synthetic polymer with a molecular weight of about 12,000. The high molecular weight allowed the melted polymer to be stretched out into strings of fiber. Thus was created the first synthetic silk, described by the chemists as a superpolyester. 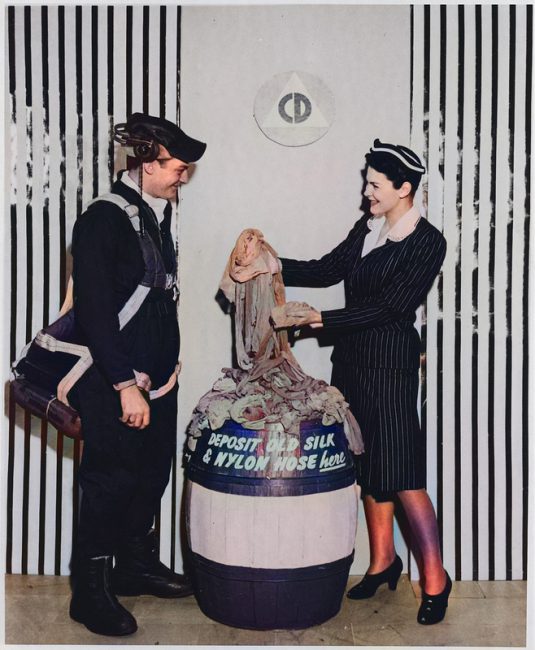 The worn out nylon [and silk] stockings in this barrel full of salvaged stockings will be reprocessed and made into parachutes for army fliers, tow ropes for gilder planes and other war material. (Office of War Information, 1942)

Polyesters and polyamides are examples of condensation polymers formed by step-growth polymerization. Carothers worked out the theory of step-growth polymerization and derived the Carothers equation which relates the average degree of polymerization to the fractional conversion (or yield) of monomer into polymer. Due to political and trade troubles with Japan, the United States’ main source of silk, that fiber was getting harder and more expensive to come by. DuPont wanted to develop a synthetic fiber that could replace it. On February 28, 1935, Gerard Berchet, under the direction of Carothers, produced a half-ounce of polymer from hexamethylenediamine and adipic acid, creating polyamide 6-6, the substance that would come to be patented and known as Nylon.

From Tiber 66 to Nylon

Carothers had brought the world not just nylon, but knowledge of natural polymers and how they are formed. During his nine years with DuPont, he finished 62 technical papers and filed 69 patents. Nylon first was only known as ‘Tiber 66″ until September 1938, when it was first used in toothbrushes. It made its first big break on May 15, 1940 when women’s hosiery hit the store shelves across the USA. More than 5 million pairs were sold on the first day of sales. In the absence of Japanese silk during World War II, nylon parachutes were produced, along with airplane-fire cord, combat clothing, netting and hammocks for the jungle, and life rafts. Today, nylon fibers are used in many applications, including clothes fabrics, bridal veils, package paper, carpets, musical strings, pipes, tents, and rope.

Unfortunately, Wallace Hume Carothers died too early to see the impact his invention would have on industry and everyday life. Battling with fits of depression, he committed suicide in a hotel room in Philadelphia one day after his forty-first birthday on April 28, 1937.

How Nylon Was Discovered – Christmas Lectures with George Porter, [9]