You are here: Home › archeology › Augustus Pitt Rivers – the Father of British Archaeology 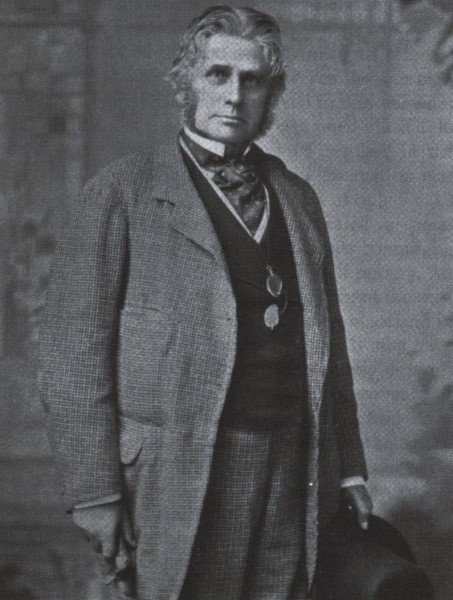 On April 14, 1832, English army officer, ethnologist, and archaeologist Augustus Henry Lane-Fox Pitt Rivers was born. He is often called the “father of British archaeology”, who stressed the need for total excavation of sites, through stratigraphic observation and recording, and prompt and complete publication. Like Sir Flinders Petrie, Pitt-Rivers adopted a sociological approach to the study of excavated objects and emphasized the instructional value of common artifacts.[4]

“Tedious as it may appear to some to dwell on the discovery of odds and ends that have, no doubt, been thrown away by the owner as rubbish … yet it is by the study of such trivial details that Archaeology is mainly dependent for determining the date of earthworks. … Next to coins fragments of pottery afford the most reliable of all evidence …”
― Augustus Henry Lane Pitt-Rivers, as quoted in [13]

Born Augustus Henry Lane-Fox at Bramham cum Oglethorpe near Wetherby in Yorkshire, UK, he was the son of William Lane-Fox and Lady Caroline Douglas. It was in 1880 that Lane-Fox inherited the estates of his cousin, Horace Pitt-Rivers, 6th Baron Rivers and with it the remainder of the Richard Rigby fortune. He was required to adopt the surname Pitt-Rivers as part of the bequest. Pitt Rivers entered the Royal Military Academy at Sandhurst in 1841 and was commissioned into the Grenadier Guards in 1845. Rivers fought for a short time in the Crimean War, and served in Malta, England, Canada, and Ireland. It is believed that his interest in collecting archaeological and ethnographic objects came out of his early professional interests in the history of firearms. Also, during his postings overseas, Pitt Rivers became a noted scientist. He was elected to the Ethnological Society of London in 1861, the Society of Antiquaries of London three years later, and the Anthropological Society of London in 1865. He managed to acquire thousands of items from all over the world and was influenced by the publications of Charles Darwin and Herbert Spencer. [1,5,6]

Archaeology as Extension of Anthropology

Pitt Rivers arranged his collections typologically and chronologically within types. It is believed that he viewed archaeology as an extension of anthropology and built up matching collections of archaeological and ethnographic objects to show longer developmental sequences. He wanted to support his views on cultural evolution and his arrangement, designed to highlight evolutionary trends in human artefacts, was a revolutionary innovation in museum design. [2] Pitt Rivers’ large ethnological collections form the basis of the Pitt Rivers Museum was founded in 1884 and is still one of Oxford’s attractions. The museum covers periods from the Lower Paleolithic to Roman and Medieval times, and extend all over the world, curating more than half a million ethnographic and archaeological artifacts, photographic and manuscript collections. The museum is now considered as one of the “six great ethnological museums of the world”. [3]

In 1882 Pitt Rivers was retired as Lieutenant General. In the same year, on the initiative of his son-in-law John Lubbock, he was appointed Inspector of Ancient Monuments. In his capacity as Inspector of Historical Monuments, Pitt Rivers was responsible for cataloguing and preserving archaeological sites in the UK. Although he pursued this goal with his own methodology, he often encountered legal difficulties, as he had little authority over landowners on the basis of whom these sites were found, in order to prevent the monuments from being destroyed.

The First Scientific Archaeologist to work in Britain

In 1880, Pitt Rivers inherited estates that contained a wealth of archaeological material from the Roman and Saxon periods. He proceeded to excavate these over seventeen seasons, from the mid-1880s until his death. The approach Pitt Rivers used was highly methodical by the standards of the time wherefore he is often considered as the first scientific archaeologist to work in Britain. He insisted that all artefacts, not just beautiful or unique ones, be collected and catalogued, which was quite innovative. He saw that in order to understand the past, researchers must look for everyday objects and this idea counts as Pitt Rivers’ most important, and most lasting, scientific legacy. [1]