You are here: Home › biology › August Krogh and the Capillary Motor Regulation Mechanism 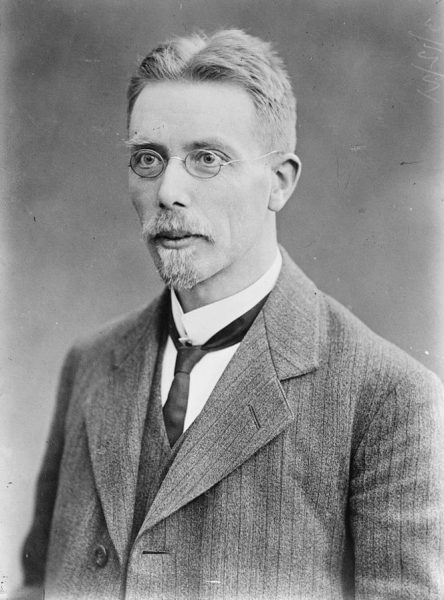 On November 15, 1874, Danish zoophysiologist August Krogh was born. Krogh contributed a number of fundamental discoveries within several fields of physiology, and is famous for developing the Krogh Principle, which states that “for such a large number of problems there will be some animal of choice, or a few such animals, on which it can be most conveniently studied.” In 1920 August Krogh was awarded the Nobel Prize in Physiology or Medicine for the discovery of the mechanism of regulation of the capillaries in skeletal muscle.

August Krogh was born in 1874 in the town of Grenaa in Jutland. His parents were Viggo Krogh, a shipbuilder, and Marie Krogh, née Drechmann. He was already very interested in the natural sciences during his school days and carried out simple experiments with animals and plants. He was strongly influenced by his teacher William Sörensen, who showed him experiments in physiology. In 1893 he began his medical studies at the University of Copenhagen, but very quickly switched to zoology, which suited him better. Around 1896, as a student, he studied the hydrostatic mechanism of Corethra larvae, a genus of tufted mosquitoes whose larvae live in water and ascend and descend by changes in their density. He found that these larvae had gas bubbles in their bodies that could be filled with oxygen from the surrounding water. His results were not published until 1911.

In 1897 he got a job in the laboratory of Christian Bohr, where he dealt with medical physiology and after his exams became Bohr’s assistant at the Institute of Medical Physiology in Copenhagen. He investigated the gas exchange of living organisms and was honoured with the Seegen Prize, an award of the Austrian Academy of Sciences, by publishing an article on the release of gaseous nitrogen through the body. In 1902 he interrupted his studies for a research trip to Greenland, where he dealt with physical-limnic questions. He studied the tensions in carbonic acid and the oxygen content in the water of springs, streams and the sea. The role of the sea in the oxygen balance of the atmosphere was also an important area of research, and he published several important papers on it.

His doctorate was awarded in 1903 on the basis of an investigation into the gas exchange of frogs. Here he was able to prove that the skin respiration of the animals was very constant, while the proportion of gas absorbed via the lungs fluctuated greatly and is controlled by the control of the vagus nerve. After completing his doctorate, he studied the diet of the Inuit in Greenland and the effects of their very one-sided, meat-only diet on their bodies.

In 1908 August Krogh received an assistant professorship in animal physiology at the University of Copenhagen, which was created especially for him and was converted into a full professorship in 1916. Krogh retained this chair until his retirement in 1945, but even after that he continued to work in his private laboratories in Gjenstofte, which were made available to him by the Scandinavian Insulin Foundation.

Right at the beginning of his professorship, Krogh rejected his first hypothesis that gas exchange in the lungs was an active additional form of gas absorption. Instead, together with his wife, he developed a completely new theory of gas absorption and was able to confirm it. With the help of the microtonometer developed by him, he was able to prove in 1910 that the oxygen pressure in the alveoli of the lungs is always higher than in the surrounding blood vessels, so that the gas exchange between lungs and blood is exclusively due to a diffusion process. In doing so, he contradicted the work of his colleague and former laboratory director Christian Bohr and the theories of John Burdon Sanderson Haldane, which at the time were regarded as favourite theses. The work of many other researchers, however, confirmed his hypotheses and today they are recognized and researched doctrines.

His further work dealt with the binding and transport of oxygen in the blood as well as the gas exchange of the blood with the surrounding tissue. Together with Christian Bohr and Karl Albert Hasselbalch, he was able to study the influence of carbon dioxide pressure on the absorption capacity of haemoglobin for oxygen in the blood. Together with Haldane’s description of the influence of oxygen on the uptake of carbon dioxide, a conclusive explanation for the gas composition of the blood could be found.

Together with Johannes Lindhard, August Krogh researched another general question of blood flow in order to find an explanation for the massive increase in the need for muscular work. In order to achieve this, the blood flow, especially of venous blood, had to be highly variable and at rest it was not sufficient to completely fill the heart ventricle. This was demonstrated by the experiments, which confirmed these theories.

Another important result was a more accurate analysis of the increase in blood and oxygen flow in the musculature during exercise. Since the oxygen pressure in a resting muscle was always very low, the sufficient increase in oxygen supply could only be explained by an increase in the area where oxygen exchange is possible. It was on this basis that Krogh’s subsequent research led to an understanding of the involvement of blood capillaries in the musculature and for which he was awarded the Nobel Prize in 1920. Here he was able to show that the capillary network of the muscles only fills with blood when the muscle is active. He investigated this process, known as the “capillary-motor regulatory mechanism”, and was able to elucidate both the activation of capillary blood flow and regulation.

After the Nobel Prize he continued his research in this field and published it in 1922 in his book The Anatomy and Physiology of the Capillaries and other publications. He also extended his work to other areas of the complex, such as heat regulation, the influence of diet and muscle capacity, the formation of lactic acid in muscles, training and muscle fatigue, and the connection with kidney activity.In the 1930s, Krogh worked with two other Nobel prizewinners, the radiochemist George de Hevesy and the physicist Niels Bohr on the permeability of membranes to heavy water and radioactive isotopes, and together they managed to obtain Denmark’s first cyclotron for experiments on animal and plant physiology, as well as in dental and medical work.[4]