You are here: Home › space › Venera 3 and the Soviet Venera Space Probe Program 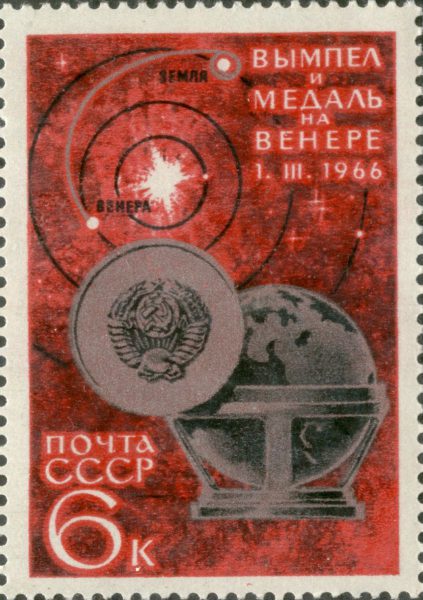 On November 16, 1965, Soviet spacecraft Venera 3 was launched. The Venera program space probe was built and launched by the Soviet Union to explore the surface of Venus. It possibly crashed on Venus on 1 March 1966, possibly making Venera 3 the first space probe to hit the surface of another planet.

The Venera series space probes were developed by the Soviet Union between 1961 and 1984 to gather data from Venus, Venera being the Russian name for Venus. The first Soviet attempt at a flyby probe to Venus was launched on February 4, 1961, but failed to leave Earth orbit. In keeping with the Soviet policy at that time of not announcing details of failed missions, the launch was announced under the name Tyazhely Sputnik (“Heavy Satellite”). It is also known as Venera 1VA. Venera 1 and Venera 2 were intended as fly-by probes to fly past Venus without entering orbit. Venera 1 , also known as Venera-1VA No.2 and occasionally in the West as Sputnik 8 was launched on February 12, 1961. Telemetry on the probe failed seven days after launch. It flew past Venus on 19 May. However, since radio contact with the probe was lost before the flyby, no data could be returned. It is believed to have passed within 100,000 km of Venus and remains in heliocentric orbit. With the help of the British radio telescope at Jodrell Bank, some weak signals from Venera 1 may have been detected in June. Soviet engineers believed that Venera-1 failed due to the overheating of a solar-direction sensor.

Venera 2 launched on November 12, 1965, but also suffered a telemetry failure after leaving Earth orbit. The Venera 2 spacecraft was equipped with cameras, as well as a magnetometer, solar and cosmic x-ray detectors, piezoelectric detectors, ion traps, a Geiger counter and receivers to measure cosmic radio emissions The spacecraft made its closest approach to Venus at 02:52 UTC on 27 February 1966, at a distance of 23,810 km. During the flyby, all of Venera 2’s instruments were activated, requiring that radio contact with the spacecraft be suspended. The probe was to have stored data using onboard recorders, and then transmitted it to Earth once contact was restored. Following the flyby the spacecraft failed to reestablish communications with the ground. It was declared lost on 4 March. An investigation into the failure determined that the spacecraft had overheated due to a radiator malfunction. Several other failed attempts at Venus flyby probes were launched by the Soviet Union in the early 1960s, but were not announced as planetary missions at the time, and hence did not officially receive the “Venera” designation.

The Competing Space Program of the USA

During 1965, the Soviet Central Committee, frustrated at the poor track record of Sergei Korolev‘s OKB-1 design bureau, reassigned the planetary probe program to the Lavochkin Bureau. In over two dozen attempts dating back to 1958, Luna 2 and Luna 3 were the only probes to complete all of their mission objectives. In the meantime, the United States had succeeded with the Mariner 2 Venus probe and Mariner 4 Mars probe, and after a long string of lunar probe failures, Ranger 6 successfully impacted on the Moon, and Ranger 7 successfully sent back a series of TV pictures. The Lavochkin Bureau began a comprehensive testing program of the Venera and Luna probes, while Korolev had always opposed the idea of bench tests except on manned spacecraft. Among other design flaws they discovered was that the Venera landers, after being subjected to a centrifuge test, failed at half the G forces that they were supposed to handle. 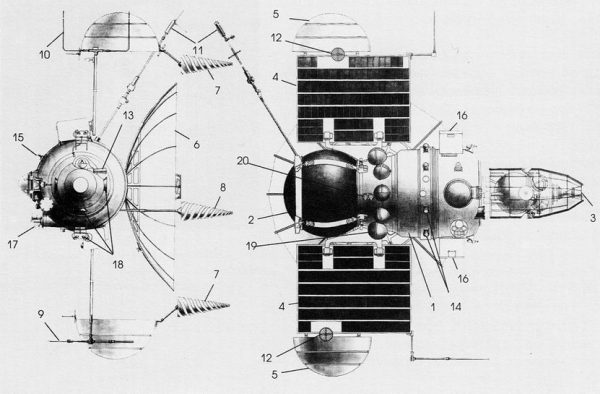 Venera 3 hitting the Surface of Venus

The mission of the Venera 3 spacecraft was to land on the Venusian surface. The entry body contained a radio communication system, scientific instruments, electrical power sources, and medallions bearing the Coat of Arms of the Soviet Union. This space probe possibly crashed on Venus on 1 March 1966, possibly making Venera 3 the first space probe to hit the surface of another planet. However, its communications systems had failed before it reached Venus.

The Venera 3 to 6 probes were similar. Weighing approximately one ton, and launched by the Molniya-type booster rocket, they included a cruise “bus” and a spherical atmospheric entry probe. The probes were optimised for atmospheric measurements, but not equipped with any special landing apparatus. On 18 October 1967, Venera 4 became the first spacecraft to measure the atmosphere of another planet. While the Soviet Union initially claimed the craft reached the surface intact, re-analysis including atmospheric occultation data from the American Mariner 5 spacecraft that flew by Venus the day after its arrival demonstrated that Venus’s surface pressure was 75-100 atmospheres, much higher than Venera 4’s 25 atm hull strength, and the claim was retracted. Realizing the ships would be crushed before reaching the surface, the Soviets launched Venera 5 and Venera 6 as atmospheric probes. Designed to jettison nearly half their payload prior to entering the planet’s atmosphere, these craft recorded 53 and 51 minutes of data, respectively, while slowly descending by parachute before their batteries failed.

The Venera 7 probe was the first one designed to survive Venus surface conditions and to make a soft landing. Massively overbuilt to ensure survival, it had few experiments on board, and scientific output from the mission was further limited due to an internal switchboard failure which stuck in the “transmit temperature” position. Still, the control scientists succeeded in extrapolating the pressure (90 atm) from the temperature data with 465 °C, which resulted from the first direct surface measurements.