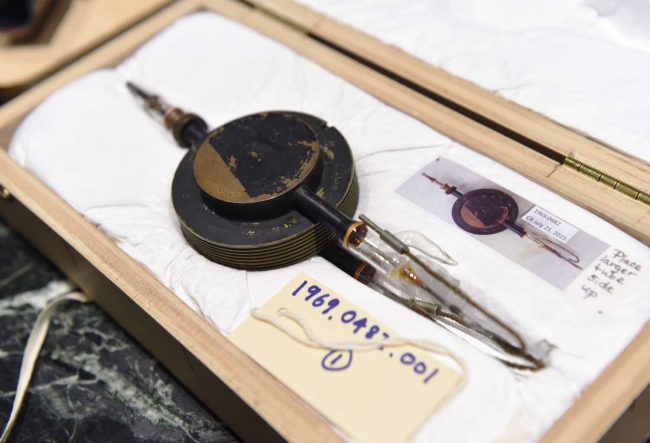 Cavity magnetron-E1189 Serial No. 12, from the Canada Science and Technology Museum, via Office of Naval Research at flickr

Education and World War I

Henry Tizard was born in Gillingham, Kent, the only son of Thomas Henry Tizard (1839–1924), naval officer and hydrographer, and his wife, Mary Elizabeth Churchward. His ambition to join the navy was thwarted by poor eyesight, and he instead studied at Westminster School and from 1904 on in Magdalen College, Oxford, where he concentrated on mathematics and chemistry, doing work on indicators and the motions of ions in gases, and graduated in 1908 with first class honours. At his tutor’s suggestion he spent time in Berlin, where he met and formed a close friendship with Frederick Alexander Lindemann, later an influential scientific government advisor of Winston Churchill. In 1909, he became a researcher in the Davy–Faraday Laboratory of the Royal Institution, working on colour change indicators. In 1911, Tizard returned to Oxford as a tutorial fellow at Oriel College and to work as a demonstrator in the electrical laboratory.

At the beginning of World War I, Tizard began war service in the Royal Garrison Artillery at Portsmouth, training recruits using his mathematical skills rather than regular army procedures. He was commissioned as a second lieutenant into the Royal Garrison Artillery on 17 October 1914 and then later transferred to the Royal Flying Corps, where he became experimental equipment officer and learned to fly planes after his eyesight improved. He acted as his own test pilot for making aerodynamic observations. When his superior Bertram Hopkinson was moved to the Ministry of Munitions, Tizard went with him. When Hopkinson died in 1918, Tizard took over his post. Tizard served in the Royal Air Force from 1918 to 1919, ending the war at the rank of lieutenant colonel.

The composition of Fuel and the Octane Number

After the end of the war he was made Reader in Chemical Thermodynamics at Oxford University, where he experimented in the composition of fuel trying to find compounds which were resistant to freezing and less volatile, devising the concept of “toluene numbers” – now referred to as octane ratings. An octane rating, or octane number, is a standard measure of the performance of an engine or aviation fuel. The higher the octane number, the more compression the fuel can withstand before igniting. In broad terms, fuels with a higher octane rating are used in high performance gasoline engines that require higher compression ratios. In contrast, fuels with lower octane numbers are ideal for diesel engines, because diesel engines do not compress the fuel, but rather compress only air and then inject fuel into the air which was heated by compression. Tizard had identified pinking and knocking as the most important factors limiting performance of petrol engines. He originally proposed the term “toluene number” to express the detonation characteristics of each fuel, which was later replaced by “octane number”.[3]

After this work, which was largely carried out for the Shell company, Tizard took up again a government post in 1920 as Assistant Secretary to the Department of Scientific and Industrial Research. His successes in this post included the establishment of the post of the Chemical Research Laboratory in Teddington, the appointment of Harry Wimperis as Director of Scientific Research to the Air Force and finally the decision to leave to become the President and Rector of Imperial College London in 1929, a position he held until 1942.

The Development of Radar

In 1935 the development of radar in the United Kingdom was started by Tizard’s Aeronautical Research Committee (Committee for the Scientific Survey of Air Defence), which he chaired since 1933, doing the first experimental work at Orfordness near Ipswich before moving to the nearby Bawdsey Research Station (BRS) in 1936. In 1935, the Tizard committee met for the first time, when Robert Watson-Watt‘s idea for detecting the presence of aircraft by a radio beam was discussed.[4]

In 1938 Tizard persuaded Mark Oliphant, at Birmingham University, to drop some of his nuclear research and concentrate on development of an improved source of short-wave radiation. This led to the invention by John Turton Randall [6] and Harry Boot of the cavity magnetron, a major advance in radar technology, which in turn provided the basis for airborne interceptors using radar.[3] In September 1940 after a top secret landmark conference with Winston Churchill at which his opposition to R.V. Jones’ view that the Germans had established a system of radio-beam bombing aids over the UK had been overruled, Tizard led what became known as the Tizard Mission to the United States, which introduced to the US, among others, the newly invented resonant-cavity magnetron and other British radar developments, the Whittle gas turbine, and the British Tube Alloys (nuclear weapons) project.

In 1942 Tizard became president of Magdalen College, Oxford, where he continued to provide advice to the British and Australian governments, chairing the Defence Research Policy Committee in 1946. In 1948 Tizard returned to the Ministry of Defence as Chief Scientific Adviser, a post he held until 1952. Tizard had followed the official debate about ghost rockets with interest and was intrigued by the increasing media coverage of UFO sightings in the United Kingdom, America and other parts of the world. Using his authority as Chief Scientific Adviser at the MOD he decided that the subject should not be dismissed without proper, official investigation. Accordingly, he agreed that a small Directorate of Scientific Intelligence/Joint Technical Intelligence Committee (DSI/JTIC) working party should be set up to investigate the phenomenon.

Throughout his career, Tizard made many notable contributions to scientific literature mainly by papers to learned societies and by articles published in scientific journals. He was elected a Fellow of the Royal Society in 1926 and was an Honorary Fellow of the Royal Aeronautical Society. Honorary degrees were conferred upon him by no less than ten universities, and in 1948 he was president of the British Association for the Advancement of Science. Henry Tizard died at Fareham, Hampshire, on 9 October 1959, aged 74.

Peter Collins, Presidential politics: how Henry Tizard did not become PRS in 1945, [7]