You are here: Home › explorer › William Scoresby and the Scientific Study of the Arctic 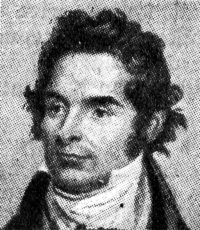 On October 5, 1789, English Arctic explorer, scientist and clergyman William Scoresby was born. Scoresby pioneered in the scientific study of the Arctic and contributed to the knowledge of terrestrial magnetism.

“Though a Greenland voyage is perhaps one of the most arduous of all maritime adventures, the mind of the commander of a whale-ship being very rarely free from anxiety ; yet, like all other occupations at sea, it affords occasional intervals of absolute leisure, such as when the attention of the captain to the progress of the ship is not requisite, or when, in consequence of calms, contrary winds, or other obstructions, the main designs of the voyage cannot be pursued.”
– Journal of William Scoresby, 1822  [4]

The Youth of a Whaler

William Scoresby was born on October 5, 1789, at Cropton, near Whitby, England, the son of William Scoresby, a master mariner.[5] At the age of 10 William Scoresby made his first Arctic whaling voyage aboard his father’s ship, the Resolution, which he later commanded in 1811.[1] He studied natural philosophy and chemistry at Edinburgh University. However, in 1806 Scoresby accompanied his father again as chief officer of the whaler Resolution when on 25 May 1806, he succeeded in reaching 81°30′ N. lat. (19° E. long), for twenty-one years the highest northern latitude attained in the eastern hemisphere.

In 1807, Scoresby undertook a voyage to survey and chart the Balta Sound in the Shetland Islands. Afterward he served with the fleet at Copenhagen. He left the navy a year later and became acquainted with Joseph Banks, who introduced him to other scientists of the day. The same year Scoresby began studying meteorology and natural history of the polar regions, for instance he observed snow and crystals. For these achievements Scoresby was elected a member of the Wernerian Society of Edinburgh. In 1811, Scoresby was appointed to command the Resolution and during his voyage two years later, he established for the first time the fact that the polar ocean has a warmer temperature at considerable depths than it has on the surface.

His correspondence to to Joseph Banks probably gave the first impulses to the search for the North-West Passage which followed. In 1816, commanding the Esk on his fifteenth whaling voyage from Whitby, Scoresby and his crew encountered problems when ice damaged his ship. With the aid of his brother-in-law’s crew on board the John, and after agreeing to surrendering much of their catch, the Esk was repaired, of which Scoresby recounted in his 1820 book The Northern Whale-Fishery.

William Scoresby was elected  a fellow of the Royal Society of Edinburgh in 1819 and published the paper On the Anomaly in the Variation of the Magnetic Needle followed by An Account of the Arctic Regions and Northern Whale Fishery (2 vols., 1820). In the work, Scoresby collected his own observations along with all those of previous explorers. In 1822, William Scoresby surveyed and charted with remarkable accuracy 400 miles of the east coast, between 69° 30′ and 72° 30′. The explorer highly contributed to the first real and important geographic knowledge of East Greenland. This, however, proved the last of his Arctic voyages. On his return, he learned of his wife’s death, and this event, with other influences acting upon his naturally pious spirit, decided him to enter the church.

At Queens’ College Cambridge, Scoresby began studying theology, earning his Divinity degree in 1839. He was ordained already in 1825, and for two years he was curé of Bessingby, near Bridlington Quay, in the north of England. He became successively chaplain of Mariners Church, Liverpool (1827-32), incumbent of Bedford Chapel, Exeter (1932-39), and vicar of Bradford (1839-47). After his Journal of a Voyage to the Northern Whale Fishery, including Researches and Discoveries on the Eastern Coast of Greenland was published in Edinburgh, Scoresby was also elected fellow of the Royal Society and he was announced honorary corresponding member of the Paris Academy of Sciences.

William Scoresby became an active member and official of the British Association for the Advancement of Science. He highly contributed to the knowledge of terrestrial magnetism, optics, and with James Joule,[7] comparing electromagnetic, thermal, and organic power sources. During the 1840s and 1850s, Scoresby traveled to Australia and America, always returning with new insights on magnetism or observations on the height of Atlantic waves. However, William Scoresby also dealt with social issues like the improvement of the condition of factory operatives. William Scoresby died at Torquay on March 21, 1857, at age 67.

The Arctic vs. the Antarctic – Camille Seaman, [10]