You are here: Home › physics › Andrei Sakharov and the Soviet Thermonuclear Bomb 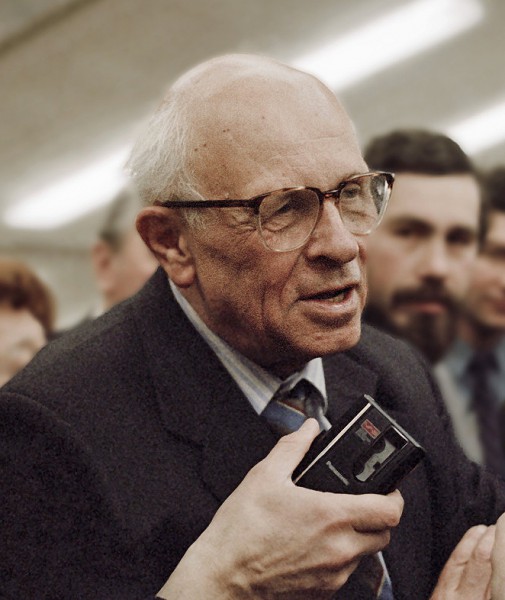 On May 21, 1921, Russian nuclear physicist, Soviet dissident, an activist for disarmament, peace and human rights Andrei Dmitrievich Sakharov was born.Sakharov became renowned as the designer of the Soviet Union‘s thermonuclear weapons. Sakharov later became an advocate of civil liberties and civil reforms in the Soviet Union, for which he faced state persecution; these efforts earned him the Nobel Peace Prize in 1975.

“We regard as “scientific” a method based on deep analysis of facts, theories, and views, presupposing unprejudiced, unfearing open discussion and conclusions.”
– Andrei Sakharov, Progress, Coexistence and Intellectual Freedom (1968)

Sakharov was born in Moscow to Dmitri Ivanovich Sakharov, a private school physics teacher and an amateur pianist, who later taught at the Second Moscow State University and Yekaterina Alekseyevna Sakharova, a great-granddaughter of the prominent military commander Alexey Semenovich Sofiano. Sakharov’s parents and paternal grandmother, Maria Petrovna, largely shaped his personality. Sakharov entered Moscow State University in 1938 and graduated in Aşgabat, in today’s Turkmenistan due to evacuation because of World War II. He was then assigned to laboratory work in Ulyanovsk and returned to Moscow in 1945 to study at the Theoretical Department of FIAN (the Physical Institute of the Soviet Academy of Sciences) to receive his Ph.D. in 1947.

After the end of World War II, Sakharov researched cosmic rays and participated in the Soviet atomic bomb project under Igor Kurchatov and Igor Tamm [1]. Sakharov’s study group at FIAN in 1948 came up with a second concept in August–September 1948. Adding a shell of natural, unenriched uranium around the deuterium would increase the deuterium concentration at the uranium-deuterium boundary and the overall yield of the device, because the natural uranium would capture neutrons and itself fission as part of the thermonuclear reaction. This idea of a layered fission-fusion-fission bomb led Sakharov to call it the sloika, or layered cake.

The Design of a Fusion Bomb

The first Soviet atomic device was tested on August 29, 1949. Sakharov then played a key role in the development of the first megaton-range Soviet hydrogen bomb using a design known as Sakharov’s Third Idea in Russia and the Teller-Ulam design in the United States. Before his Third Idea, Sakharov tried a “layer cake” of alternating layers of fission and fusion fuel. The results were disappointing, yielding no more than a typical fission bomb. However the design was seen to be worth pursuing because deuterium is abundant and uranium is scarce, and he had no idea how powerful the US design was. One of the Bikini atomic experiments changed that, because the magnitude of the explosion became public knowledge when there was a dispute between Japan and the US over the contamination of a large area of ocean. Sakharov was surprised by the size of the explosion and realized that the Americans had harnessed the power of a separate fission explosion to compress the fusion fuel. Sakharov realized that in order to cause the explosion of one side of the fuel to symmetrically compress the fusion fuel, a mirror could be used to reflect the radiation.

Sakharov’s idea was first tested as RDS-37 in 1955. A larger variation of the same design which Sakharov worked on was the 50 Mt Tsar Bomba of October 1961, which was the most powerful nuclear device ever detonated [2]. Sakharov saw “striking parallels” between his fate and those of J. Robert Oppenheimer and Edward Teller in the USA [3]. Sakharov believed that in this “tragic confrontation of two outstanding people“, both deserved respect, because “each of them was certain he had right on his side and was morally obligated to go to the end in the name of truth.” While Sakharov strongly disagreed with Teller over nuclear testing in the atmosphere and the Strategic Defense Initiative, he believed that American academics had been unfair to Teller’s resolve to get the H-bomb for the United States since “all steps by the Americans of a temporary or permanent rejection of developing thermonuclear weapons would have been seen either as a clever feint, or as the manifestation of stupidity“.

In 1950 Sakharov proposed an idea for a controlled nuclear fusion reactor, the tokamak, which is still the basis for the majority of work in the area.[7] Sakharov, in association with Igor Tamm, proposed confining extremely hot ionized plasma by torus shaped magnetic fields for controlling thermonuclear fusion that led to the development of the tokamak device.

After 1965 Sakharov returned to fundamental science and began working on particle physics and cosmology. He tried to explain the baryon asymmetry of the universe, being the first scientist to introduce two universes called “sheets”, linked by the Big Bang. Sakharov achieved there a complete CPT symmetry since the second sheet is enantiomorph (P-symmetry), has an opposite arrow of time (T-symmetry) and is mainly populated by antimatter (C-symmetry) because of an opposite CP-violation. Sakharov’s second innovative idea attempted to explain gravity as originating from properties of the quantum vacuum. In the words of physicist John Archibald Wheeler, the gravity would be “an elasticity of space that arises from particle physics,” like ordinary elasticity that arises from the microphysics of atoms and molecules. It was a brand-new approach in the long quest for unifying gravity with other fundamental forces and, at the same time, in the quest for quantum gravity.[6]

“A thermonuclear war cannot be considered a continuation of politics by other means (according to the formula of Clausewitz). It would be a means of universal suicide.”
– Andrei Sakharov, Progress, Coexistence and Intellectual Freedom (1968)

Since the late 1950s Sakharov had become concerned about the moral and political implications of his work. Politically active during the 1960s, Sakharov was against nuclear proliferation. Pushing for the end of atmospheric tests, he played a role in the 1963 Partial Test Ban Treaty, signed in Moscow. The major turn in Sakharov’s political evolution came in 1967, when anti-ballistic missile defense became a key issue in US–Soviet relations. In a secret detailed letter to the Soviet leadership of July 21, 1967, Sakharov explained the need to “take the Americans at their word” and accept their proposal for a “bilateral rejection by the USA and the Soviet Union of the development of antiballistic missile defense”, because otherwise an arms race in this new technology would increase the likelihood of nuclear war. He also asked permission to publish a manuscript in a newspaper to explain the dangers posed by this kind of defense. The government ignored his letter and refused to let him initiate a public discussion of ABMs in the Soviet press.

An Open Dissident in Moscow

In May 1968 Sakharov published an essay “Reflections on Progress, Peaceful Coexistence, and Intellectual Freedom“, in which he described the anti-ballistic missile defense as a major threat of world nuclear war. As an effect, Sakharov was banned from conducting any military-related research and “relieved” of his privileges in the Soviet “Nomenclatura” (the privileged class at the top of the system)[5]. Over the next twelve years, until his exile to Gorky (Nizhny Novgorod) in January 1980, Andrei Sakharov assumed the role of a widely recognized and open dissident in Moscow. By 1973 Sakharov was meeting regularly with Western correspondents, holding press conferences in his apartment. Sakharov became the target of sustained pressure and intimidation, from his fellow scientists in the USSR Academy of Sciences, the Soviet press and direct threats of physical assault. Dissident activists, including the writer Solzhenitsyn, sprang to his defence.

Sakharov was awarded the Nobel Peace Prize in 1975. The Norwegian Nobel Committee called him “a spokesman for the conscience of mankind”. Sakharov was not allowed to leave the Soviet Union to collect the prize. His wife Yelena Bonner read his speech at the ceremony in Oslo, Norway. Sakharov was arrested on January 22, 1980, following his public protests against the Soviet intervention in Afghanistan in 1979, and was sent to internal exile in the city of Gorky, now Nizhny Novgorod, a city that was off limits to foreigners. Between 1980 and 1986, Sakharov was kept under tight Soviet police surveillance. In May 1984, Sakharov’s wife, Yelena Bonner, was detained and Sakharov began a hunger strike, demanding permission for his wife to travel to the United States for heart surgery. He was forcibly hospitalized and force-fed. In April 1985, Sakharov started a new hunger strike for his wife to travel abroad for medical treatment. He again was taken to a hospital and force-fed. He remained in the hospital until October 1985 when his wife was allowed to travel to the United States.

In 1986, Mikhail Gorbachev, who had initiated the policies of perestroika and glasnost, called Sakharov to tell him that he and his wife could return to Moscow. Despite the measure of freedom now possible, which enabled him to take up a political role as an elected member of the Congress of the People’s Deputies, Sakharov was critical of Gorbachev, insisting that the reforms should go much further.[5] Andrei Sakharow died on December 14, 1989, aged 68.

The Legacies of Andrei Sakharov: A Public Lecture by Dr. Robert Horvath, [9]