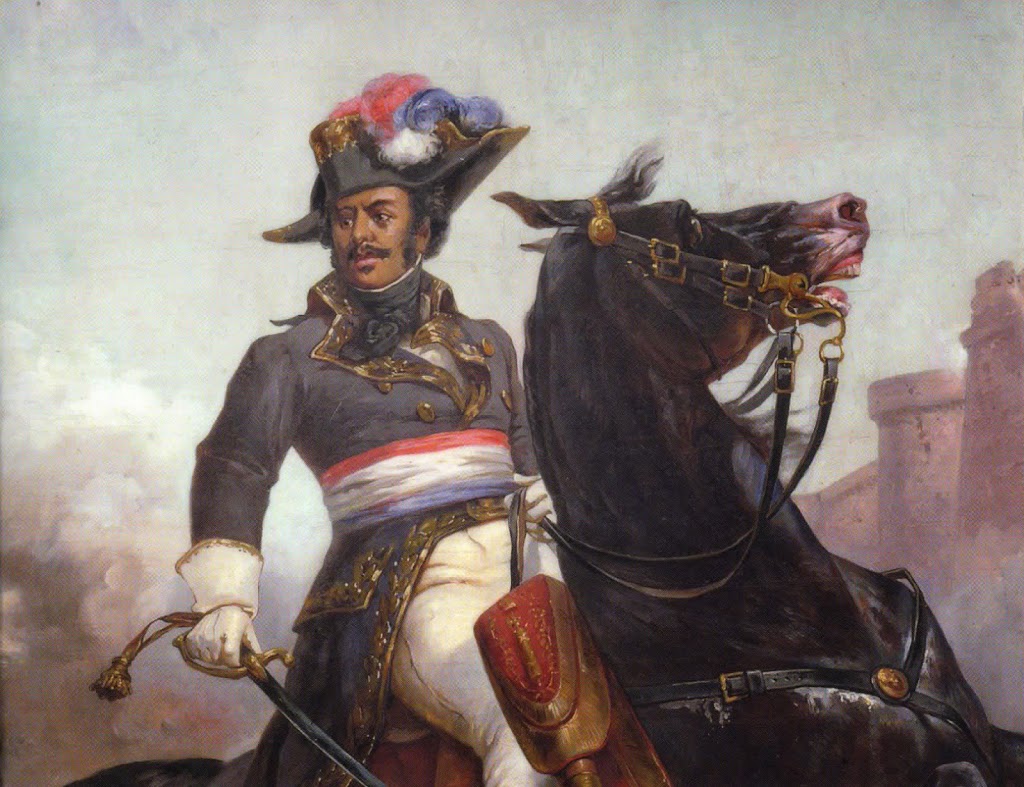 On March 25, 1762, Thomas Alexandre Dumas was born. Dumas was the Father of the famous French author Alexandre Dumas [5] and the first black General in the French army. The story of his life should become the blueprint for his son’s most famous novels ‘The Count of Monte Christo‘ and ‘The Three Musketeers‘.

“Do not value money for any more nor any less than its worth; it is a good servant but a bad master.”
— Thomas-Alexandre Dumas

For sure you know Alexandre Dumas, the famous author of the adventure stories around the ‘Three Musketeers‘. Maybe then you have also heard of his son, Alexandre Dumas fils (junior) – same name -, who also was a famous author most notably with his novel ‘The Lady of the Camelias‘, which was the template for Giuseppe Verdi‘s opera ‘La Traviata‘.[6] Now, to make the confusion complete, the father (grandfather) of Alexandre Dumas also was called ‘Alexandre Dumas’ – thus, in France they are often referred to as ‘The three Dumas’. Well the later is often referred to as Thomas-Alexandre Dumas although he himself chose the name ‘Alex Dumas’ instead adopting his fathers name as ‘Marquis Thomas-Alexandre Davy de la Pailleterie’.

Born 25 March 1762 in Jérémie, Saint-Domingue (today Haiti), Thomas-Alexandre Davy de la Pailleterie was the son of a French nobleman, the Marquis Alexandre Antoine Davy de la Pailleterie and his black African slave Marie-Cessette Dumas. In 1738, Alexandre Antoine joined his younger brother’s sugar cane plantations in Saint-Domingue, a French colony in the Caribbean, to make a living. He lived with his brother’s family and worked at the plantation until 1748, when the two brothers began to quarrel violently, and Antoine left the plantation. At that point Antoine broke off contact with his brother and his family for a period of thirty years. During that time, Antoine Davy de la Pailleterie purchased the slave woman Marie-Cessette “for an exorbitant price” and took her as a concubine. In 1762, she gave birth to their mixed-race son Thomas Alexandre.

Youth and Education in Normandy

When the brothers’ parents died in 1758, Antoine returned to Normandy to claim the title Marquis and the family château. In 1776 when Alexandre was fourteen years old, his father sold the boy for 800 French livres in Port-au-Prince to a Captain Langlois. This sale (with right of redemption) provided both a legal way to have Alexandre taken to France with Langlois and a temporary loan to pay for his father’s passage. The boy accompanied Captain Langlois to Le Havre, France, arriving on August 30, 1776, where his father bought him back and freed him. After his arrival in France, Alexandre studied at the academy of Nicolas Texier de La Boëssière, where he was given the higher education of a young nobleman of the time. At this school, he learned swordsmanship from the Chevalier de Saint-Georges, another mixed-race man from the French Caribbean. Thanks to his father’s wealth and generosity, Thomas Alexandre Dumas lived a life of considerable leisure.

In 1786 Dumas decided to join the French Army, a common occupation for gentlemen. Unlike his noble peers, who took arms as commissioned officers, Dumas enlisted as a private. Although a 1781 rule enabled men who could show four generations of nobility on their father’s side to qualify to be commissioned as officers. Dumas had this, but the French race laws “made it hard for a man of mixed race to claim his rightful title or noble status.” The enlistment roll-book described Dumas as “6 feet tall, with frizzy black hair and eyebrows… oval face, and brown skinned, small mouth, thick lips.” According to the earliest known published description of him (1797), he was “one of the handsomest men you could ever meet.”

Following the French revolution in 1789, Alex Dumas made his way through the military ranks. A corporal by 1792, Dumas made his first combat experience on the Belgian frontier, where he succeeded to captured 12 enemy soldiers while leading a small scouting party of 4 to 8 horsemen. In October 1792, Dumas accepted a commission as lieutenant colonel in the Légion franche des Américains et du Midi, a “free legion” (i.e., formed separately from the regular army) composed of free men of color (gens du couleur libre). It was also called the “American Legion,” the “Black Legion,” or the Saint-George Legion, after its commanding officer, the Chevalier de Saint-George, Dumas’ former instructor in swordsmanship. On July 30, 1793, he was promoted to the rank of brigadier general in the Army of the North. One month later, he was promoted again, to general of division and was made commander-in-chief of the Army of the Western Pyrenees, followed by the command of the Army of the Alps. During his campaign in the Alps defeating Austrian and Piedmontese troops at Mont Cenis, where Dumas’s army, equipped with ice crampons, took the mountain by scaling ice cliffs and captured between 900 and 1,700 prisoners. Though his victory won Dumas praise from political leaders in Paris, he was called before the Committee of Public Safety in the June of 1794, for reasons unspecified but probably to face charges of treason, as this was the period of the “Great Terror“. Fortunately for him, Dumas delayed his arrival in Paris not to be seen by the Committee before the Terror ended with the execution of Robespierre on July 27, 1794.

The Horatius Cocles of the Tyrols

General Dumas joined the Army of Italy in Milan in November 1796, serving under the orders of its commander-in-chief, Napoleon Bonaparte. Tension between the two generals began in this period, as Dumas resisted Napoleon’s policy of allowing French troops indiscriminately to expropriate local property. Dumas’ crowning achievement in this period came 1797, when the general single-handedly drove back an entire squadron of Austrian troops at a bridge over the Eisack River in Clausen. It was this feat for which the French began referring to Dumas as “the Horatius Cocles of the Tyrol” (after a hero who had saved ancient Rome). In 1798, Dumas joined Napoleon’s Campaign in Egypt. After the first battles were fought, Napoleon sent Dumas to pay ransom to some Bedouins who had kidnapped French soldiers. The expedition’s chief medical officer recounted in a memoir that local Egyptians, judging Dumas’ height and build versus Napoleon’s, believed Dumas to be in command. Something which Napoleon would never forgive. Following the destruction of the French armada by a British fleet led by Horatio Nelson, however, Dumas was unable to get out of Egypt until March of the following year. Dumas’ ship was forced by storms to land at Taranto, in the Kingdom of Naples, where Dumas and the rest of the passengers were imprisoned and most of their belongings confiscated. Dumas was malnourished and kept incommunicado for two years until his release in March 1801.

The Denial of his Rightful Pension

After he finally gained release in 1801, Dumas was not awarded “the pension normally allocated to the widows of generals” by the French government and he struggled to support his family after his return to France. He repeatedly wrote to Napoleon Bonaparte, who kept ignoring his letters. He died of stomach cancer on 26 February 1806 in Villers-Cotterêts leaving behind his three-years-old son Alexandre and his widowed mother in deep poverty due to Napoleon Bonaparte’s “implacable hatred”.

So, if this is not the stuff, where adventure novels are made of! No wonder that young Alexandre Dumas was fascinated by his father, the military hero and his numerous adventures. In 1913, a statue of General Dumas was erected in Place Malesherbes (now Place du Général Catroux) in Paris in Autumn 1912 after a long fundraising campaign spearheaded by Anatole France and Sarah Bernhardt. His name is inscribed on the south wall of the Arc de Triomphe.