You are here: Home › chemistry › Alexander Todd and the Chemistry of Nucleotide Coenzymes 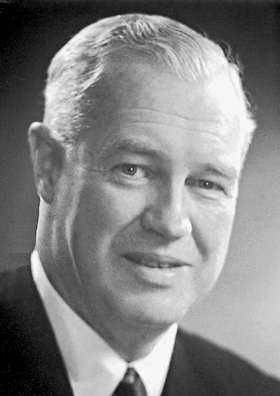 On October 2, 1907, British chemist and Nobel laureate Alexander Robertus Todd, Baron Todd was born. Todd‘s research on the structure and synthesis of nucleotides, nucleosides, and nucleotide coenzymes gained him the Nobel Prize for Chemistry.

Alexander R. Todd was born near Glasgow, Scotland, the elder son of Alexander Todd, a business man of that city, and his wife Jean Lowrie. In 1918 Todd gained admission to the Allan Glen’s School in Glasgow, a science high school, and continued his education at the University of Glasgow, where he graduated with a B.Sc. in 1928 with a thesis on the reaction of phosphorus pentachloride with ethyl tartrate and its diacetyl derivative under the direction of T. E. Patterson, resulting in his first publication. Todd was awarded a Carnegie research scholarship and stayed on for another year working for Patterson on optical rotatory dispersion.[1] He further went on to Germany studying under Walter Borsche at the Johann Wolfgang Goethe University of Frankfurt am Main, where he received a PhD (Dr.phil.nat.) in 1931 for his thesis on the chemistry of apocholic acid, one of the bile acids, i.e. compounds produced in the liver and having a structure related to that of cholesterol and the steroids.

From Oxford to Edinburgh

He worked from 1931-1934 on anthocyanins and other colouring matters with organic chemist and Nobel laureate Sir Robert Robinson at Oriel college, Oxford University, and took another Ph.D. degree in 1933. After leaving Oxford, Todd went to the University of Edinburgh on a Medical Research Council grant to study the structure of vitamin B1. After graduating from the University of Oxford, Todd held posts with the Lister Institute, the University of Edinburgh (staff, 1934–1936) and the University of London, where he was appointed Reader in Biochemistry. Toward the end of his stay at Edinburgh, Todd had begun to investigate the chemistry of vitamin E, in particular a group of related compounds called tocopherols, which is an antioxidant — i.e. it inhibits loss of electrons. He continued this line of research at the Lister Institute and also started an investigation of the active ingredients of the Cannabis sativa plant (marijuana) that showed that cannabinol, the major product isolated from the plant resin, was pharmacologically inactive.[1]

Todd became the Sir Samuel Hall Chair of Chemistry and Director of the Chemical Laboratories of the University of Manchester in 1938, where he began working on nucleosides, compounds that form the structural units of nucleic acids (DNA and RNA). In World War 2, as a member, and then chair, of the Chemical Committee, which was responsible for developing and producing chemical warfare agents, Todd developed an efficient method of producing diphenylamine chloroarsine (a sneeze gas), and designed a pilot plant for producing nitrogen mustards (blistering agents). He also had a group working on penicillin research and another trying to isolate and identify the “hatching factor” of the potato eelworm, a parasite that attacks potatoes.[1] In 1944, he was appointed to the Chair of Chemistry in the University of Cambridge, which he held until his retirement in 1971.

Synthesizing Adenosine and the Nobel Prize in Chemistry

By 1949, Todd had succeeded in synthesizing adenosine — a triumph in itself —  and had gone on to synthesize adenosine di-and triphosphate (ADP and ATP). These compounds are nucleotides responsible for energy production and energy storage in muscles and in plants. In 1952, he established the structure of flavin adenine dinucleotide (FAD), a coenzyme involved in breaking down carbohydrates so that they can be oxidized, releasing energy for an organism to use. Todd collaborated with Dorothy Crowfoot Hodgkin in determining the structure of vitamin B12, the antipernicious anemia factor, which is necessary for the formation of red blood cells. Todd’s chemical studies of the degradation products of B12 were crucial to Hodgkin‘s X-ray determination of the structure in 1955.[3] He continued working on the structure and synthesis of vitamin B1 and vitamin E, the anthocyanins (the pigments of flowers and fruits) from insects (aphids, beetles) and studied alkaloids found in hashish and marijuana. For his pioneering work on nucleotides and nucleotide enzymes, Todd was awarded the 1957 Nobel Prize in chemistry.[1]

Todd served as chairman of the Government of the United Kingdom’s advisory committee on scientific policy from 1952 to 1964. He was knighted in 1954 by Queen Elizabeth II for distinguished service to the government and was raised to the Peerage in March, 1962, being created Baron Todd of Trumpington.[1,2] He was elected a Fellow of Christ’s College, Cambridge in 1944 and was Master from 1963 to 1978. He became Chancellor of the University of Strathclyde in 1975, and a visiting professor at Hatfield Polytechnic (1978–1986). He was elected as a Fellow of the Royal Society in 1942, was President of the Royal Society from 1975 to 1980 and became a member of the Order of Merit in 1977.