You are here: Home › medical science › Walter Bradford Cannon and the Concept of Homeostasis 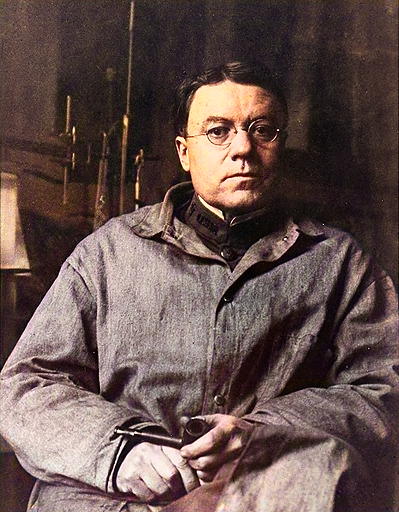 On October 1, 1871, American physiologist Walter Bradford Cannon was born. Cannon coined the term fight or flight response, and he expanded on Claude Bernard’s concept of homeostasis. Homeostasis is the property of a system within an animal in which a variable, such as the concentration of a substance in solution, is actively regulated to remain very nearly constant. Examples of homeostasis include the regulation of body temperature, the pH of extracellular fluid, or the concentrations of sodium, potassium and calcium ions, as well as that of glucose in the blood plasma.

Walter Bradford Cannon was born the son of a railwayman. He joined Harvard Medical Schools, where he graduated in biology in 1896 and earned a PhD in 1897.  He already started working at Bowditch’s Lab during his first year at Harvard. Henry Pickering Bowditch, who had worked with Claude Bernard, directed the laboratory there. After earning his degree, Cannon was hired by William Townsend Porter at Harvard as an instructor in the Department of Physiology. Cannon became George Higginson Professor of Physiology and chairman of the Department of Physiology at Harvard Medical School in 1906.

Swallowing and the Motility of the Stomach

When Cannon first started working with Bowditch he used the newly discovered X-rays to study the mechanism of swallowing and the motility of the stomach. He managed to demonstrate deglutition in a goose at the American Physiological Society meeting in December 1896. Cannon published his first paper on this research in the first issue of the American Journal of Physiology in January 1898.

During the First World War (from 1914), he served as president of the American Physiological Society and dealt with the traumatic shock in response to threat from which many soldiers suffered. He coined the term fight-or-flight response, which describes the response of animals to threat, and published Bodily Changes in Pain, Hunger, Fear and Rage (1915). As a military physician in World War I he also discovered that the blood of shocked men was acidic.

The Concept of Homeostasis

The concept of homeostasis was described around 1860 by the physiologist Claude Bernard. Biology knows many states of equilibrium, which are maintained by special homeostatic processes. The balance can be maintained within a cell, an organ or via an organism. The property to be maintained can be anatomical, chemical, physical or mathematical (number of cells). In physiology, the term homeostasis is defined as the maintenance of a constant internal environment (target state), which comes about through regulation. An example of this is the homeostasis of the brain, which is maintained by the blood-brain barrier.

Inspired by the early ides of Claude Bernard of milieu interieur, Walter Cannon developed the concept of homeostasis. He published his results in the book The Wisdom of the Body in 1932.[8] Walter Cannon presented four tentative propositions to describe the general features of homeostasis: (1) Constancy in an open system, such as our bodies represent, requires mechanisms that act to maintain this constancy. Cannon based this proposition on insights into the ways by which steady states such as glucose concentrations, body temperature and acid-base balance were regulated. (2) Steady-state conditions require that any tendency toward change automatically meets with factors that resist change. An increase in blood sugar results in thirst as the body attempts to dilute the concentration of sugar in the extracellular fluid. (3) The regulating system that determines the homeostatic state consists of a number of cooperating mechanisms acting simultaneously or successively. Blood sugar is regulated by insulin, glucagons, and other hormones that control its release from the liver or its uptake by the tissues. (4) Homeostasis does not occur by chance, but is the result of organized self-government.

The Cannon Bard theory – which Cannon developed with his student Philip Bard (1898-1977) – states that an “emotional stimulus” produces two simultaneous reactions, physiological excitement and the perception of emotion. Neither of the two reactions causes the other. The theory assumes that the physical processes are independent of the psychological ones.