You are here: Home › chemistry › Albert Szent-Györgyi and the DIscovery of Vitamin C 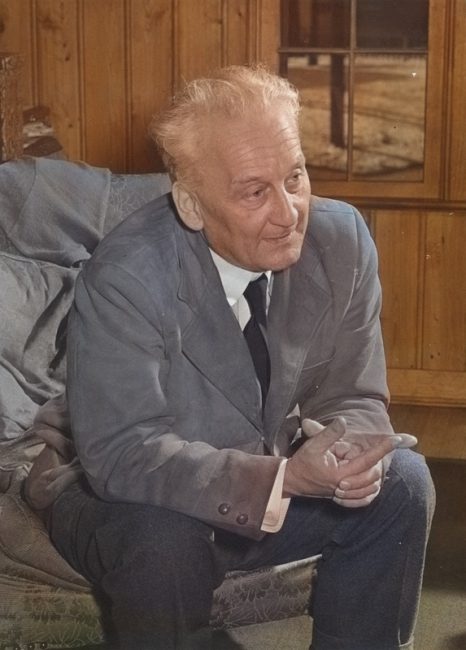 “Discovery consists of looking at the same thing as everyone else and thinking something different.”
Attributed to Szent-Györgyi in: IEEE (1985) Bridging the present and the future: IEEE Professional Communication Society conference record, Williamsburg, Virginia, October 16-18, 1985. p. 14.

Albert Szent-Györgyi was born in Budapest, Kingdom of Hungary, Austro-Hungarian Empire, to Miklós Szent-Györgyi, a Calvinist landowner, and his mother Jozefina, whose brothers were both Professors of Anatomy in the University of Budapest. Actually, his family included three generations of scientists. Szent-Györgyi began his studies at the Semmelweis University in 1911, then began research in his uncle’s anatomy lab. His studies were interrupted in 1914 to serve as an army medic in World War I on the Italian and Russian fronts, gaining the Silver Medal for Valour. In 1916, he inflicted himself a shot in the arm with his revolver and claimed to be wounded from enemy fire, and was sent home on medical leave. He was then able to finish his medical education and received his MD in 1917.

From Budapest to Cambridge

Albert Szent-Györgyi completed his studies in Budapest and then worked successively with the pharmacologist, G. Mansfeld at Pozsony, with Armin von Tschermak at Prague, where he studied electrophysiology, and with L. Michaelis in Berlin, before he went to Hamburg for a two-year course in physical chemistry at the Institute for Tropical Hygiene. In 1920 he became an assistant at the University Institute of Pharmacology in Leiden and from 1922 to 1926 he worked with H. J. Hamburger at the Physiology Institute, Groningen, The Netherlands, where his work focused on the chemistry of cellular respiration. This work landed him a position as a Rockefeller Foundation fellow at Cambridge University. He received his PhD from Fitzwilliam College, Cambridge in 1927 for work on isolating an organic acid, which he then called “hexuronic acid”, from adrenal gland tissue.

The Discovery of Vitamin C

In 1930 he obtained the Chair of Medical Chemistry at the University of Szeged and in 1935 he also took the Chair in Organic Chemistry. There, Szent-Györgyi and his research fellow Joseph Svirbely found that “hexuronic acid” was actually the thus far unidentified antiscorbutic factor, known as vitamin C. In 1907 Axel Holst and Alfred Fröhlich, two Norwegians, posited the existence of vitamin C on the basis of its biological effects, and an international competition ensued to isolate the vitamin.[4] In our cells nutrients are broken down so that energy is released for the construction of cells. Albert Szent-Györgyi studied these metabolic processes and showed how their sequences are affected by catalysts – substances that facilitate reactions without being incorporated in the final products. Growth hormones, including fumaric acid, play a key role in transporting fluids as part of oxidation reactions in metabolism. Szent-Györgyi also pointed to the role of vitamin C, the substance he identified, in the processes.[3] After Walter Norman Haworth had determined the structure of vitamin C, and in honor of its antiscorbutic properties, it was given the formal chemical name of L-ascorbic acid. In some experiments they used paprika (Capsicum annuum) as the source for their vitamin C. Also during this time, Szent-Györgyi continued his work on cellular respiration, identifying fumaric acid and other steps in what would become known as the Krebs cycle.[2]

The 1937 Nobel Prize in Physiology or Medicine

In 1937, Szent-Györgyi received the Nobel Prize in Physiology or Medicine “for his discoveries in connection with the biological combustion process with special reference to vitamin C and the catalysis of fumaric acid“. Albert Szent-Györgyi offered all of his Nobel prize money to Finland in 1940 as support against the Soviet invasion of Finland in 1939. During the 1930’s Szent-Györgyi was actively anti-Nazi and during World War II he became a Swedish citizen – he was given extensive help by the Swedish Embassy in Budapest.[1] In 1938, he began work on the biophysics of muscle movement and found out that muscles contain actin, which when combined with the protein myosin and the energy source ATP, contract muscle fibers.

In 1947, Szent-Györgyi established the Institute for Muscle Research at the Marine Biological Laboratory in Woods Hole, Massachusetts with financial support from Hungarian businessman Stephen Rath. In 1948, he received a research position with the National Institutes of Health (NIH) in Bethesda, Maryland and began dividing his time between there and Woods Hole. In 1950, grants from the Armour Meat Company and the American Heart Association allowed him to establish the Institute for Muscle Research. During the 1950s, Szent-Györgyi began using electron microscopes to study muscles at the subunit level. In 1955, he became a naturalized citizen of the United States. He became a member of the National Academy of Sciences in 1956.

The Quantum Biology of Cancer

In the late 1950s, Szent-Györgyi developed a research interest in cancer and developed ideas on applying the theories of quantum mechanics to the biochemistry (quantum biology) of cancer. The death of Rath, who had acted as the financial administrator of the Institute for Muscle Research, left Szent-Györgyi in a financial mess, which finally lead to the establishment of a private nonprofit organization, the National Foundation for Cancer Research. Late in life, Szent-Györgyi began to pursue free radicals as a potential cause of cancer. He came to see cancer as being ultimately an electronic problem at the molecular level. Szent-Györgyi received the Cameron Prize (Edinburgh) in 1946 and the Lasker Award in 1954. His many publications include Oxidation, Fermentation, Vitamins, Health and Disease (1939); Muscular Contraction (1947); The Nature of Life (1947); Contraction in Body and Heart Muscle (1953); and Bioenergetics (1957).

An outspoken opponent of military spending, nuclear weapons, and war in general, Szent-Györgyi was pessimistic about the state of modern life and expressed his sociopolitical views in his 1970 book, The Crazy Ape.[4] Albert Szent-Györgyi died on October 22, 1986, aged 93.