You are here: Home › medical science › Hans Adolf Krebs and the Krebs Cycle 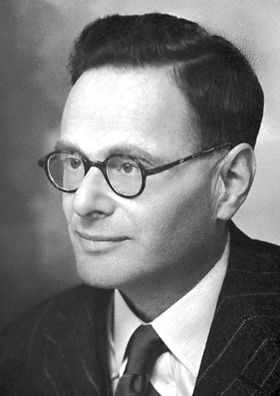 On August 25, 1900, German-born British physician and biochemist Hans Adolf Krebs was born. Krebs was the pioneer scientist in study of cellular respiration, a biochemical pathway in cells for production of energy. He is best known for his discoveries of two important chemical reactions in the body, namely the urea cycle and the citric acid cycle. The latter, the key sequence of metabolic reactions that produces energy in cells, often eponymously known as the “Krebs cycle“, earned him a Nobel Prize in Physiology or Medicine in 1953.

Hans Adolf Krebs was the elder son, and second of three children, of Georg Krebs, an otolaryngologist with a flourishing private practice, and Alma Davidson Krebs. As a boy he was deeply impressed by the intact late-medieval and Renaissance architecture of the old city of Hildesheim, at the edge of which his family lived in a comfortable house with a spacious garden. Krebs attended the famous old Gymnasium Andreanum in his home town. Before completing his secondary school education he was conscripted into the Imperial German Army in September 1918, during World War I. Fortunately, the war ended after two months and his conscription ended.

He decided to follow his father’s profession and entered the University of Göttingen in December 1918 to study medicine. In 1919 he transferred to the University of Freiburg. In 1923 he published his first technical paper on tissue staining technique, the study which he started under the guidance of his teacher Wilhelm von Mollendorf in 1920. He completed his medical course in December 1923. To obtain a medical license he spent one year at the Third Medical Clinic in the University of Berlin. By then he turned his ambition towards chemistry. In 1924 he studied at the Department of Chemistry at the Pathological Institute of the Charité Hospital, Berlin, for informal training in chemistry and biochemistry. He finally earned his MD. degree in 1925 from the University of Hamburg.

In 1926 Krebs joined Otto Heinrich Warburg as a research assistant at the Kaiser Wilhelm Institute for Biology in Dahlem, Berlin. After four years in 1930, he moved on and took up the position of Assistant in the Department of Medicine at the Municipal Hospital in Altona, and a year later moved to the Medical Clinic of the University of Freiburg, where he was at liberty to do his own research. Before a year was over at Freiburg, he, with a research student Kurt Henseleit, postulated the metabolic pathway for urea formation, now known as the ornithine cycle of urea synthesis. In 1932 he worked out the basic chemical reactions of urea cycle, which established his scientific reputation.

Krebs’ life as a reputed German scientist came to an abrupt halt because of his Jewish ancestry, when Hitler’s Nazi Party in 1933 decreed the Law for the Restoration of the Professional Civil Service, which decreed the removal of all non-Aryans and anti-Nazis from professional occupations. Krebs’ service was terminated on 1 July, 1933. Sir Frederick Gowland Hopkins [5] at the University of Cambridge, immediately came to his rescue and persuaded the university to recruit Krebs to work with him in the Department of Biochemistry with financial support from the Rockefeller Foundation. Although he was restricted to bring only his personal belongings, he was fortunate to be allowed to take his equipment and research samples to England, as they proved to be pivotal to his later discoveries.

Krebs was appointed as Demonstrator in biochemistry in 1934 and in 1935 the University of Sheffield offered him a post of Lecturer in Pharmacology. There, Krebs together with and William Johnson investigated cellular respiration by which oxygen was consumed to produce energy from the breakdown of glucose. One hypothesis involving succinate, fumarate, and malate proved to be useful because all these molecules increased oxygen consumption in the pigeon breast muscle. In 1937 German biochemists Franz Koop and Carl Martinus had demonstrated a series of reactions using citrate that produced oxaloacetate. Krebs realised that these molecules could be the missing intermediates for such reaction. After four months of experimental works to fill the gap, Krebs and Johnson succeeded in establishing the sequence of the chemical cycle, which they called the “citric acid cycle”. Early isotopic studies in other laboratories had by 1941 confirmed the main outlines of the theory, but seemed for a time to indicate that citric acid itself lay outside the main pathway. Consequently the cycle was renamed the “tricarboxylic acid cycle,” although it was already referred to sometimes as the “Krebs cycle”.[2]

University of Sheffield opened a Department of Biochemistry in 1938 and Krebs became its first Head, and eventually Professor in 1945. While, in 1939, Krebs became a naturalised British citizen, he took over the running of the Sorby Research Institute in 1943. In 1944, the British Medical Research Council established the MRC Unit for Cell Metabolism Research at Sheffield, and Krebs was appointed as the Director. He moved with his MRC unit to the University of Oxford in 1954 as Whitley Professor of Biochemistry, the post he held till his retirement in 1967.

In 1953 the paramount importance that the citric acid cycle had attained in biochemistry was recognized in the award of the Nobel Prize jointly to Krebs and to Fritz Lipmann, whose discovery of coenzyme-A had specified the details of the crucial synthetic step in the cycle.[2] He was elected Fellow of Trinity College, Oxford, 1954-1967. He was elected to the Royal Society in 1947. For the same reason he was given the Royal Medal of the Royal Society in 1954, and the Copley Medal in 1961. He was knighted in 1958 and was elected Honorary Fellow of Girton College, Cambridge University in 1979. He received an honorary doctorate from 21 universities.

Krebs carried on his scientific activity vigorously, until September 1981.[2] After a brief illness, Hans Krebs died on 22 November 1981 in Oxford, aged 81.