You are here: Home › biology › Albert Calmette and the Antituberculosis Vaccine 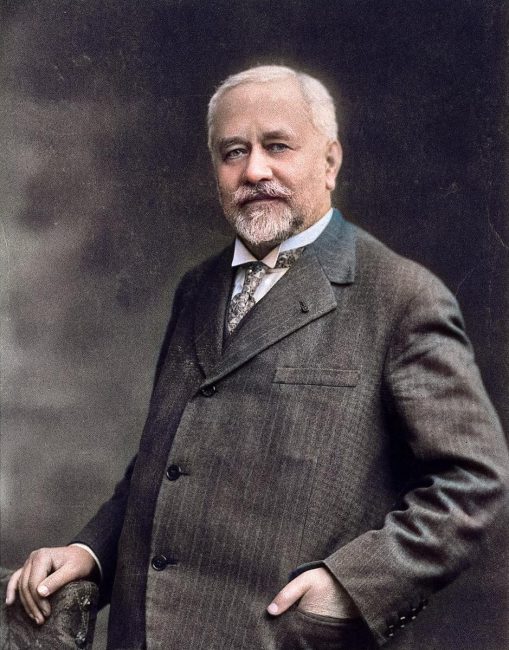 On July 12, 1863, French physician, bacteriologist and immunologist Léon Charles Albert Calmette was born. Calmette discovered the Bacillus Calmette-Guérin, an attenuated form of Mycobacterium bovis used in the BCG vaccine against tuberculosis. He also developed the first antivenom for snake venom, the Calmette‘s serum.

Calmette was born in Nice, France. He wanted to serve in the Navy and be a physician, so in 1881 he joined the School of Naval Physicians at Brest. He started to serve in 1883 in the Naval Medical Corps in Hong Kong, where he worked with Dr. Patrick Manson, who studied the mosquito transmission of the parasitic worm, filaria, the cause of elephantiasis. Calmette completed his medical degree on the subject of filariasis in Paris in 1886. He was then assigned to Saint-Pierre and Miquelon, where he arrived in 1887. Afterwards, he served in West Africa, in Gabon and French Congo, where he researched malaria, sleeping sickness and pellagra. In 1889 he attended one of the first courses in microbiology given by Pierre Paul Emil Roux at the Pasteur Institute in Paris and shortly afterward accepted, at Louis Pasteur’s request, the directorship of a research laboratory in Saigon (French Indochina) in 1891.[7] There, he dedicated himself to the nascent field of toxicology, which had important connections to immunology, and he studied snake and bee venom, plant poisons and curare. He also organized the production of vaccines against smallpox and rabies and carried out research on cholera, and the fermentation of opium and rice.

In 1894, he came back to France again and develop the first antivenoms for snake bites using immune sera from vaccinated horses (Calmette’s serum). He also took part in the development in the first immune serum against the bubonic plague (black pest), in collaboration with the discoverer of its pathogenic agent, Yersinia pestis, by Alexandre Yersin, and went to Portugal to study and to help fight an epidemic at Oporto.

Extending the Institute to Algiers

In 1895, Roux entrusted him with the directorship of the Institut Pasteur de Lille, where he was to remain for the next 25 years. In 1901, he founded the first antituberculosis dispensary at Lille, and named it after Emile Roux. In 1909, he helped to establish the Institute branch in Algiers, Algeria. In 1918, he accepted the post of assistant director of the Institute in Paris; the following year he was made a member of the Académie Nationale de Médecine.

A Vaccine for Tuberculosis

Calmette’s main scientific work was the attempt to develop a vaccine against tuberculosis, which, at the time, was a major cause of death. At this time, the main public health problem facing Lille was a high incidence of tuberculosis, the death rate being in the region of 300 per 100,000. Calmette approached the problem systematically, in the same manner that he had tackled other problems that he encountered in the Far East.[5] The German microbiologist Robert Koch had discovered, in 1882,[6] that the tubercle bacillus, Mycobacterium tuberculosis, was its pathogenic agent, and Louis Pasteur became interested in it too. In 1906, a veterinarian and immunologist, Camille Guérin, had established that immunity against tuberculosis was associated with the living tubercle bacilli in the blood. Using Pasteur’s approach, Calmette investigated how immunity would develop in response to attenuated bovine bacilli injected in animals.

This preparation received the name of its two discoverers (Bacillum Calmette-Guérin, or BCG, for short). From 1908 to 1921, Guérin and Calmette strived to produce less and less virulent strains of the bacillus, by transferring them to successive cultures. Finally, in 1921, they used BCG to successfully vaccine newborn infants in the Charité in Paris. Equally interested in problems of public health, he studied the purification of sewage, entered the battle against ancylostomiasis, and made several improvements in fermentation techniques.[2] Calmette resigned from his chair as teacher of bacteriology and hygiene in Lille, to devote himself completely to research on tuberculosis. In 1917 Calmette was appointed assistant director of the Pasteur Institute in Paris but was unable to leave northern France, which was occupied by the Germans.

The first clinical trials were made in 1922, but the vaccination program suffered a serious setback when 72 out of 259 vaccinated children developed tuberculosis in 1930, in Lübeck, Germany, causing serious doubt about the use of the vaccine. It was due to the efforts of the German bacteriologists Bruno Lange and Ludwig Lange that the truth was revealed: due to sloppy production the vaccine had contained virulent bacilli. It was soon proved, however, that such dangers could be eliminated through correct production methods, and in 1932 the court declared the vaccination safe.[4]

Mass vaccination of children was reinstated in many countries after 1932, when new and safer production techniques were implemented. Notwithstanding, Calmette was deeply shaken by the event, dying one year later in 1933, in Paris. Originally BCG was administered orally shortly after birth, but today, following Nègre and Bretey, it is administered by injection. This may cause local lesions, but they are always minor; and the insignificant annoyance they represent is largely compensated for by the high degree of protection.[2]