You are here: Home › astronomy › Leonid Kulik and the Mysterious Tunguska Event 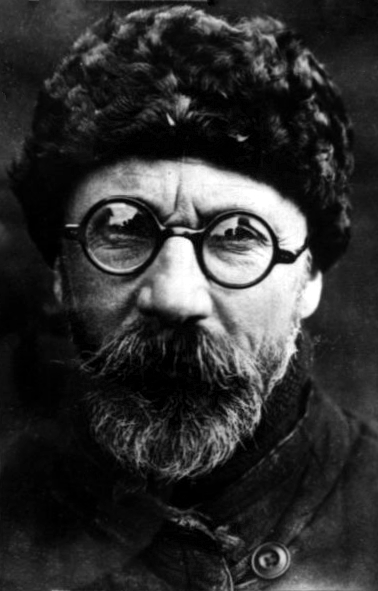 On August 19, 1883, Russian mineralogist Leonid Alekseyevich Kulik was born. Kulik is noted for his research in meteorites. In 1927, Kulik conducted the first scientific expedition (for which records survive) to study the Tunguska meteor impact site, the largest impact event in recorded history, which had occurred on 30 June 1908.[1]

Leonid Kulik was born in Tartu, Estonia, which was later to become part of the Soviet Union, and was educated at the Imperial Forestry Institute in Saint Petersburg and studied physics and mathematics the Kazan University. He served in the Russian military during the Russo-Japanese War, then spent some time in jail for revolutionary political activities. He then served with the Russian military during World War I.

Following the war he became an instructor, teaching mineralogy in Tomsk. In 1920 he was offered a job at the Mineralogical Museum in St. Petersburg (later Leningrad). At the Museum he devoted much of his time to a new discipline: the acquisition and study of meteorites. In 1921 Kulik was charged with the task of locating and examining meteorites that had fallen within the Soviet Union. While preparing for this expedition, he came across an account of an explosion in Tunguska, Siberia, reprinted from an old newspaper, which caused him to go searching for additional old newspaper accounts. Putting all information piece by piece together he determined that the event, which he felt sure was the result of a meteorite fall, must have been enormous. [2]

On the 17th of June, around 9 a.m. in the morning, we observed an unusual natural occurrence. In the north Karelinski village [200 verst north of Kirensk] the peasants saw to the north west, rather high above the horizon, some strangely bright (impossible to look at) bluish-white heavenly body, which for 10 minutes moved downwards. The body appeared as a “pipe”, i.e., a cylinder. The sky was cloudless, only a small dark cloud was observed in the general direction of the bright body. It was hot and dry. As the body neared the ground (forest), the bright body seemed to smudge, and then turned into a giant billow of black smoke, and a loud knocking (not thunder) was heard, as if large stones were falling, or artillery was fired. All buildings shook. At the same time the cloud began emitting flames of uncertain shapes. All villagers were stricken with panic and took to the streets, women cried, thinking it was the end of the world. Sibir newspaper, 2 July 1908

During his first expedition Kulik only managed to figure out the general location of the blast area, not actually visit it. Afterward Kulik continued to collect stories about the event.[2] Nevertheless, Kulik persuaded the Soviet government to fund another expedition to the Tunguska region, based on the prospect of meteoric iron that could be salvaged to aid Soviet industry.

“The results of even a cursory examination exceeded all the tales of eyewitnesses and my wildest expectations,” Leonid Kulik about the Tunguska destruction [2]

In 1927, Kulik Soviet research expedition to investigate the Tunguska event, the largest impact event in recorded history, which had occurred on 30 June 1908. Upon arrival, Kulik made arrangements with the local Evenki hunters to guide his party to the impact site. Reaching the explosion site was an extremely arduous task. He circled the region where the trees had been felled and became convinced that they were all turned with their roots to the center. As they came closer to the epicentre of this devastation Kulik’s guides abandoned him, overcome by superstitious fears. The indigenous Evenki people believed that Ogda, the god of fire and thunder, had returned to strike them down with invisible fire.[4]

The spectacle that confronted Kulik as he stood on a ridge overlooking the devastated area was overwhelming. To the explorers’ surprise, no crater was to be found. There was instead around ground zero a vast zone (8 km across) of trees scorched and devoid of branches, but standing upright. Such debranching requires fast moving shock waves that break off a tree’s branches before the branches can transfer the impact momentum to the tree’s stem.[3] 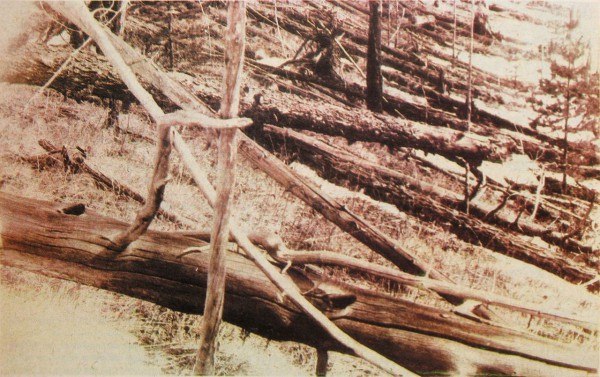 Photograph from Kulik’s 1929 expedition taken near the Hushmo river

No Traces of a Meteorite

However he did not find any meteorite fragments from the impact. Kulik returned to the Academy with enough photographs and documentation to convince even his most skeptical colleagues that something amazing had happened along the Tunguska river.[2]

During the next ten years there were three more expeditions to the area. Kulik found several dozens of little “pothole” bogs, each some 10 m to 50 m in diameter, that he thought might be meteoric craters. After a laborious exercise in draining one of these bogs, he found there was an old stump on the bottom, ruling out the possibility that it was a meteoric crater. In 1938, Kulik arranged for an aerial photographic survey of the area] covering the central part of the leveled forest.

During World War II he again fought for his country, this time in a paramilitary militia. He was captured by the German army and died in a prisoner of war camp of typhus in 1942.

To this day, no fragments of an impactor visible to the naked eye have been found. A smaller depression was interpreted by Kulik as a crater, but this was not confirmed. The search for microscopic dust-like remains of the impactor or chemical and isotopic anomalies, as would be expected if extraterrestrial material were to enter, has so far yielded little success. Microscopically small particles, diamond dust, graphite splinters and molten iron and nickel grains were found. According to theoretical estimates of the possible orbits of the Tunguska bolide, a stone asteroid is most likely, although a comet is not completely excluded here either. The results of a 1999 Tunguska expedition support the view of meteorite impact. The Soviet scientist Andrei Olchowatow favoured a purely geophysical interpretation of the Tunguska event at the end of the 1980’s. He was followed by the German astrophysicist Wolfgang Kundt, who argued that it was a volcanic eruption. [29] According to this, the event could be explained as an explosion of 10 million tons of natural gas that escaped through cracks from an underground natural gas reservoir under high pressure, rose to high atmospheric layers at high speed, ignited by frictional electricity and burned in a flame front down to the point of emission. This would explain the different directions of movement of the bright luminous phenomenon reported by witnesses. Also a slight earthquake and strange atmospheric luminous phenomena observed in the days before the explosion could be related to this. It is also reported that there was unusually bright night sky in Europe and Asia in the days following the event. For example, in London it was possible to read a newspaper in this light.