You are here: Home › physics › Heike Kamerlingh Onnes and Superconductivity 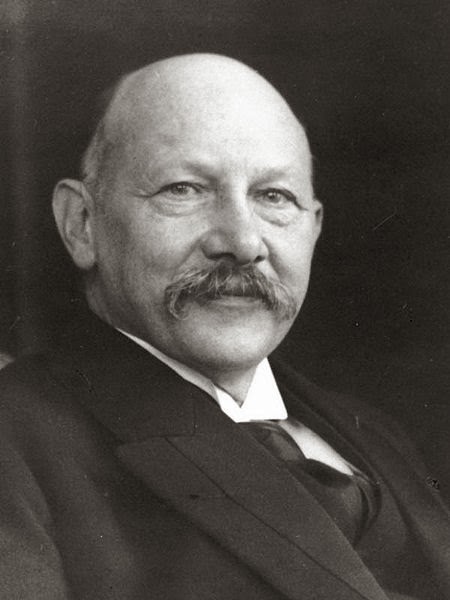 On April 8, 1911, Dutch physicist and Nobel Laureate Heike Kamerlingh Onnes found that at a temperature of only 4.2 K (-269° C) the resistance in a solid mercury wire immersed in liquid helium suddenly vanished. Kamerlingh Onnes discovered superconductivity.

Born in Groningen, Netherlands, Kamerlingh Onnes also attended the city’s university and studied under the famous Robert Bunsen [4] and Gustav Kirchhoff [5] at the University of Heidelberg in the early 1870s. In 1871, Kamerlingh Onnes‘ talents for solving scientific problems was already apparent, since he was awarded a Gold Medal for a competition sponsored by the Natural Sciences Faculty of the University of Utrecht, followed the next year by a Silver Medal at the University of Groningen. Kammerlingh Onnes obtained his masters in 1878 and a doctorate in 1879 with a thesis on “Nieuwe bewijzen voor de aswenteling der aarde” (New proofs of the rotation of the earth). Subsequently he became assistant to Johannes Bosscha, Dutch physicist and director of the TU Delft.

How Low Can You Go?

Starting in 1882, Kamerlingh Onnes served as professor of experimental physics at the University of Leiden, where he stayed until 1923. Onnes founded a very large cryogenics laboratory and invited other researchers to the location, which made him highly regarded in the scientific community. The laboratory is now  known as Kamerlingh Onnes Laboratory. About four years after founding the famous laboratory, Onnes managed to liquefy helium through multiple precooling stages and the Hampson-Linde cycle based on the Joule-Thomson effect. Doing this, Onned was able to lower the temperature to the boiling point of helium, which is about -269°C. Onnes reduced the pressure of the liquid helium and thus achieved temperatures near 1.5 K, which were the coldest temperatures achieved on earth at the time.

The Discovery of Superconductivity

In 1911 Kamerlingh Onnes managed to measure the electrical conductivity of pure metals at very low temperatures. He believed, that a conductor’s electrical resistance would steadily decrease and drop to nil. In April of the same year, he found out that at 4.2 K the resistance in a solid mercury wire immersed in liquid helium suddenly vanished and almost immediately realized the significance of his amazing discovery. He then reported that “Mercury has passed into a new state, which on account of its extraordinary electrical properties may be called the superconductive state“. Further articles on the phenomenon were published by Onnes and he referred to it as “supraconductivity”. Only later on, the term was changed to “superconductivity“. The instruments used for these experiments are now demonstrated at the Boerhaave Museum in Leiden.

Around 1911 Kamerlingh Onnes also made the discovery that liquid helium (4He-II) moves slowly upwards as a thin film (so-called Rollin film) on vessel walls. This phenomenon is called the Onnes effect. Thus Kamerlingh Onnes had recognized an essential property of superfluidity. Superfluidity is a macroscopic quantum effect and in physics describes the state of a liquid in which it loses all internal friction. In addition, superfluid substances have no entropy and almost ideal thermal conductivity; it is therefore difficult to generate a temperature difference within a superfluid substance.

“A life has come to an end that will always remain a model for future generations […]. I have not known anyone else for whom duty and joy were the same and identical thing. This is the reason for his harmonious life. “
—  Albert Einstein about Heike Kammerlingh Onnes