You are here: Home › photography › Anna Atkins – Botanist and Photographer 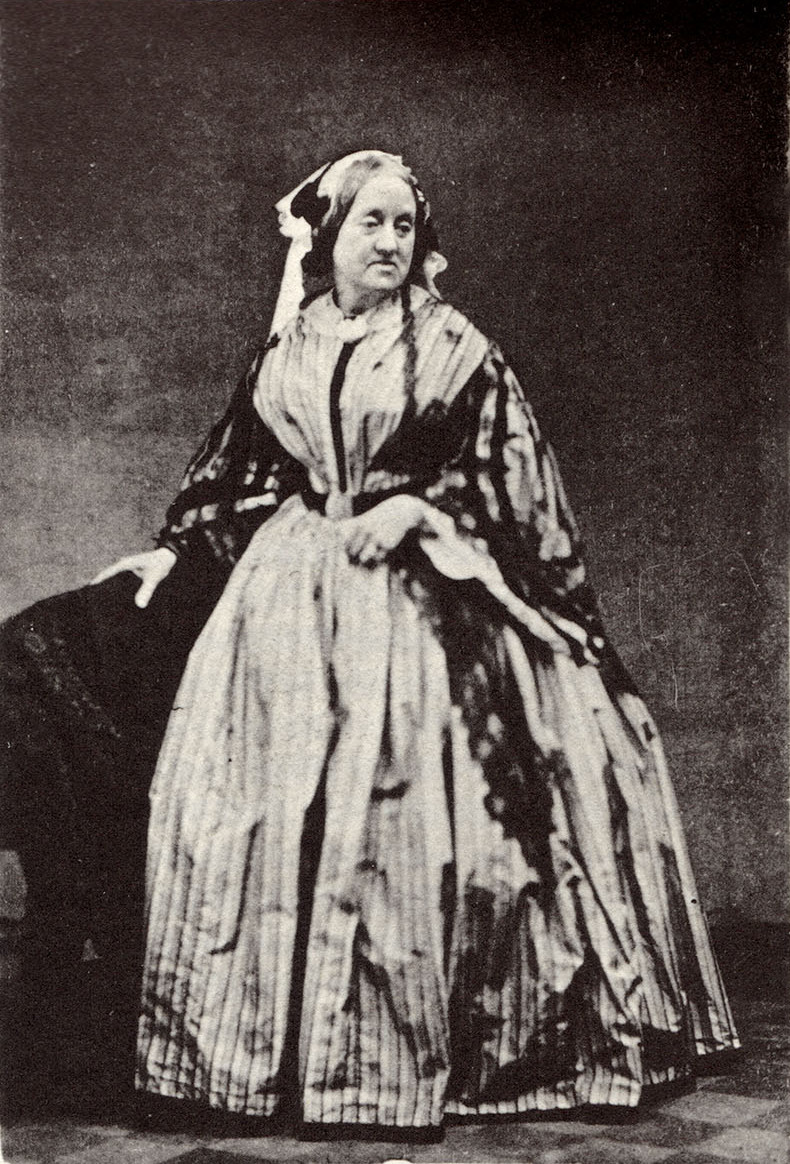 On March 16, 1799, English botanist and photographer Anna Atkins was born. She is often considered the first person to publish a book illustrated with photographic images. Morover, she is also considered by some for being the first woman to create a photograph.

“The difficulty of making accurate drawings of objects so minute as many of the Algae and Confervae has induced me to avail myself of Sir John Herschel’s beautiful process of Cyanotype, to obtain impressions of the plants themselves, which I have much pleasure in offering to my botanical friends.”
– Anna Atkins, (in British Algae: Cyanotype Impressions (1843)

Anna Atkins was born in Tonbridge, Kent, England. Unfortunately her mother Hester Anne Children soon after Anna’s birth in 1800. Anna’s father John George Children was a respected scientist, being secretary of the Royal Society and associated with the British Museum. Thus, Anna received an unusually scientific education for a woman of her time. While in her early 20s, Anna Atkins made drawings for her father’s translation of Jean-Baptiste de Monet Lamarck’s Genera of Shells (1823), but her prime interest lay in the study of botany.[8]

In 1825 she married John Pelly Atkins, a London West India merchant, and they moved to Halstead Place, the Atkins family home in Sevenoaks, Kent. They had no children. Anna Atkins pursued her interests in botany, for example by collecting dried plants. She became a member of the Botanical Society of London, which from its foundation in 1836 was open to men and women, amateurs and professionals. John George Children and John Pelly Atkins were friends of photographic pioneers William Henry Fox Talbot[1], as well as of astronomer, chemist, and fellow Royal Society member Sir John Herschel.[9] Anna Atkins learned directly from Talbot and Herschel about two of their inventions related to photography: the “photogenic drawing” technique, an invention of Talbot in which an object is placed on light-sensitized paper which is exposed to the sun to produce an image, and cyanotypes, an invention by Herschel.

For cyanotypes, the substance to be recorded is laid on paper impregnated with ferric ammonium citrate and potassium ferricyanide, both colorless, water-soluble iron salts as well as relatively inexpensive chemicals that were easy to work with. The images produced were also much more permanent than other early types of photograph.[6] When exposed to sunlight, the salts form the compound known as Prussian Blue. Unexposed areas remain unaffected and the salt rinses away in plain water, leaving a blue ‘negative’ image. Eventually this process, known as blueprinting, was used mainly to reproduce architectural and engineering drawings.[2] Atkins applied the process to algae (specifically, seaweed) by making cyanotype photograms that were contact printed by placing the unmounted dried-algae original directly on the cyanotype paper.

Atkins was known to have had access to a camera by 1841. Whether or not she was the first woman to take a photograph — some claim it was Talbot’s wife, Constance — her self-published book Photographs of British Algae: Cyanotype Impressions (October 1843) predates her mentor Sir John Herschel’s The Pencil of Nature (June 1844), which is acknowledged to be the first commercially printed book illustrated with photos, by some months. As no camera-based photographs by Anna Atkins nor any photographs by Constance Talbot survive, the issue may never be resolved. But, in her book the rich blue tones of cyanotype proved particularly appropriate for these beautifully arranged studies of marine organisms, valued now for their abstract elegance rather than for any scientific usefulness.[5] She also used this same method to produce title pages and contents lists instead of having them conventionally typeset. 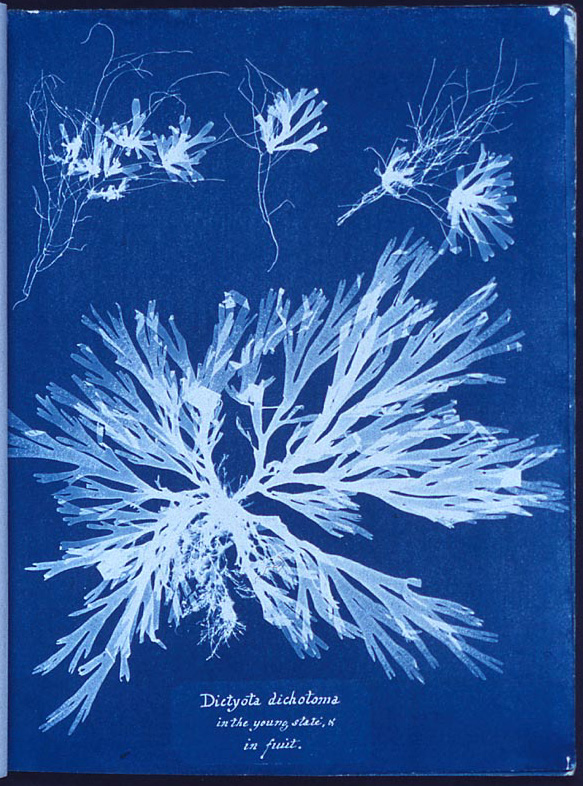 A cyanotype photogram made by Atkins which was part of her 1843 book, Photographs of British Algae: Cyanotype Impressions

In 1854 Atkins, possibly collaborating with her friend Anne Dixon, produced an album entitled Cyanotypes of British and Foreign Flowering Plants and Ferns. In addition, she published books with non-photographic work (The Perils of Fashion (1852), The Colonel. A Story of Fashionable Life (1853), Murder Will Out (1859)). She died at Halstead Place in 1871 at the age of 72.

Atkins produced a total of three volumes of Photographs of British Algae: Cyanotype Impressions between 1843 and 1853. Only 17 copies of the book are known to exist, in various states of completeness. Because they were produced in such small numbers, her books are very rare, and have fetched up to £229,000 at auction.[4]