You are here: Home › communication › Alexander Popov and his Radio Receiver 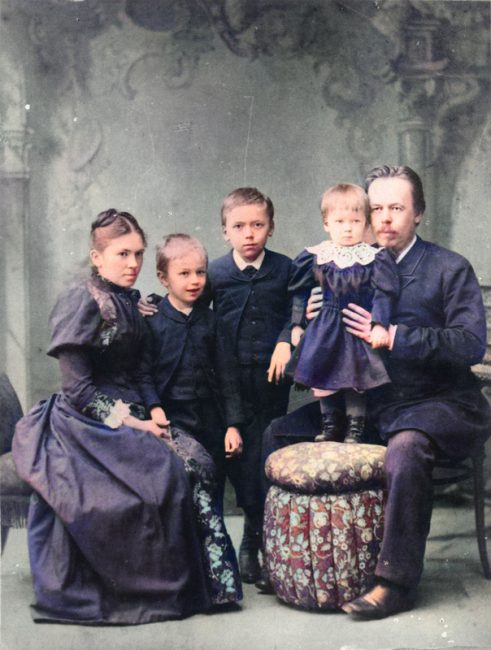 On March 4, 1859, Russian physicist Alexander Stepanovich Popov was born. Alexander Popov is acclaimed in his homeland and eastern European countries as the inventor of radio. In 1895 he presented a paper on a wireless lightning detector he had built that worked via using a coherer to detect radio noise from lightning strikes.

“I can express my hope that my apparatus will be applied for signaling at great distances by electric vibrations of high frequency, as soon as there will be invented a more powerful generator of such vibrations.”,
– Alexander Stepanovitch Popov, as quoted in [11]

The Son of a Priest

Born in the town Krasnoturinsk, Sverdlovsk Oblast in the Urals as the son of a priest, Popov became interested in natural sciences when he was a child. His father wanted him to join the priesthood and sent him to the Seminary School at Yekaterinburg, where Popov developed an interest in science and mathematics and instead of going on to Theology School in 1877 he enrolled at the University of St. Petersburg to study physics in 1877. After graduating in the field of mathematics, he joined the university’s teaching faculty. However, Popov’s scientific interest switched to electrical engineering. Therefor, he became an instructor at the Russian Navy’s Torpedo School at Kronstadt near St. Petersburg. There, the students were taught to take charge of electrical equipment on Russian warships and Popov himself managed to take advantage of the institution’s well equipped library. Popov was influenced by the works of the German physicist Heinrich Hertz and his discovery of electromagnetic waves and began to search for methods of receiving them over long distances [4].

In 1894, after the death of Hertz, British physicist Oliver Lodge gave a memorial lecture on Hertz experiments [5]. Lodge set up a demonstration on the quasi optical nature of Hertzian waves and demonstrated their transmission at distances up to 50 meters by using a detector called a coherer, a glass tube containing metal filings between two electrodes. When received waves from an antenna were applied to the electrodes, the coherer became conductive allowing the current from a battery to pass through it, with the impulse being picked up by a mirror galvanometer. After receiving a signal, the metal filings in the coherer had to be reset by a manually operated vibrator or by the vibrations of a bell placed on the table nearby that rang every time a transmission was received. Popov set to work to design a more sensitive radio wave receiver that could be used as a lightning detector, to warn of thunderstorms by detecting the electromagnetic pulses of lightning strikes using a coherer receiver and installed it at the meteorological observatory of the Institute of Forestry in St. Petersburg in 1895. Popov published his results in a paper suggesting that such an apparatus could be used for the reception of signals from a man-made source of oscillations. He appeared before the St. Petersburg Physicochemical Society, demonstrating the transmission of Hertzian waves between different parts of the University of St. Petersburg buildings.

One of the first radio receivers, built by Russian physicist Alexander Popov as a lightning detector in 1894. It is not clear from the source whether this is the original or a recreation.

In May 1895, Popov demonstrated his evidence that the words ‘Heinrich Hertz‘ were transmitted in Morse code and that the aural signals received were transcribed on a blackboard by the society’s president, who was the chairman of the meeting. It is believed that he read a newspaper article about Marconi’s demonstrations in September 1896 for the first time in 1896. However, it is believed that neither Marconi nor Popov was aware of the close similarity between their experiments.[6]

Working together with the Russian navy, Popov successfully established a ship-to-shore communication over a distance of 10 km by 1898. In the next months, they were able to increase the maximum distance up to 50 km. Unfortunately however, it is believed that Popov did not receive much support by the Russian government until 50 years later, when national attitudes and enthusiasms had changed.

Popov’s experimental work in connection with Hertzian waves deserves much recognition. However, it has not been generally accepted that radio communication was actually invented by him. His description of the receiving apparatus was published in 1896 and it closely coincides with the patent by Marconi, published in June 1896. However, Alexander Popov is considered the first to use an antenna in the transmission and reception of radio waves.

In 1900 a radio station was established under Popov’s instructions on Hogland island, in the Gulf of Finland in the eastern Baltic Sea, about 180 km west from Saint Petersburg and 35 km from the coast of Finland, to provide two-way communication by wireless telegraphy between the Russian naval base and the crew of the battleship General-Admiral Apraksin. The battleship ran aground on Hogland Island in November, 1899. The crew of the Apraksin were not in immediate danger, but the water in the Gulf began to freeze. Due to bad weather and bureaucratic red tape, the crew of Apraksin did not arrive until January 1900 to establish a wireless station on Hogland Island. By the time the Apraksin was freed from the rocks by the icebreaker Yermak at the end of April, 440 official telegraph messages had been handled by the Hogland Island wireless station. Besides the rescue of the Apraksin’s crew, more than 50 Finnish fishermen, who were stranded on a piece of drift ice in the Gulf of Finland, were saved by the icebreaker Yermak following distress telegrams sent by wireless telegraphy.

In 1901 Alexander Popov was appointed as professor at the Electrotechnical Institute, which now bears his name. In 1905 he was elected director of the institute. In 1905, Alexander Stephanovitch Popov became seriously ill and died of a brain hemorrhage on January 13, 1906, at age of only 46. He was buried in the Volkovo cemetery in St Petersburg. Long after Popov’s death and after World War II, May 7 was declared “Radio Day” in the Soviet Union in 1945. The choice of the date followed the fact that Popov presented his reception experiments of lightning discharges to the Russian Academy of Sciences for the first time on May 7, 1895, and that May 7, 1945 was the 50th anniversary of this event. The East-West conflict that began after 1945 contributed to the fact that the Russian physicist Popov is considered the inventor of radio in the Soviet Union, also for propagandistic motives, and is revered in this representation.