You are here: Home › astronomy › William Lassell and the Discovery of Triton 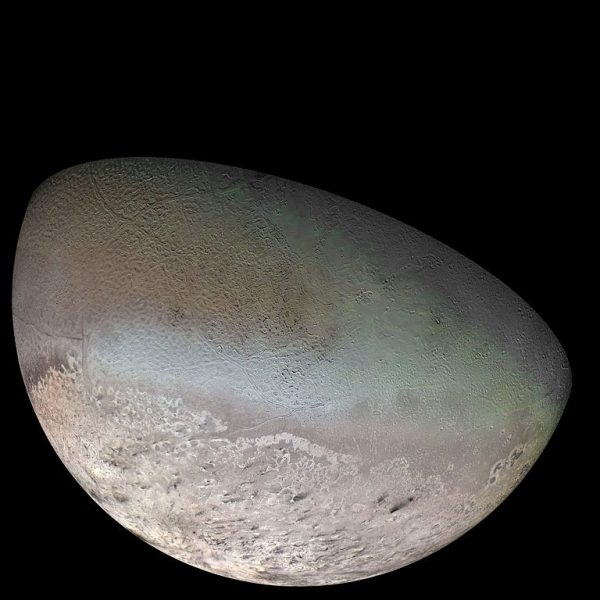 Global Color Mosaic of Triton, taken by Voyager 2 in 1989

Lassell started a brewery business about 1825, after a seven-year apprenticeship. He became interested in astronomy and, in 1844, began construction of a 24-inch reflecting telescope, using a machine of his own design for polishing the mirror in 1820. With this telescope, the first of its size to be set in an equatorial mounting, he discovered Triton on Oct. 10, 1846 [1]. Triton is the largest natural satellite of the planet Neptune. It is the only large moon in the Solar System with a retrograde orbit, an orbit in the opposite direction to its planet’s rotation. At 2,700 kilometres in diameter, it is the seventh-largest moon in the Solar System. Because of its retrograde orbit and composition similar to Pluto’s, Triton is thought to have been a dwarf planet captured from the Kuiper belt. Triton has a surface of mostly frozen nitrogen, a mostly water-ice crust, an icy mantle and a substantial core of rock and metal. Triton is one of the few moons in the Solar System known to be geologically active (the others being Jupiter’s Io and Saturn’s Enceladus). As a consequence, its surface is relatively young with few obvious impact craters, and a complex geological history revealed in intricate cryovolcanic and tectonic terrains. Part of its surface has geysers erupting sublimated nitrogen gas, contributing to a tenuous nitrogen atmosphere less than 1/70,000 the pressure of Earth’s atmosphere at sea level.

Upon the Suggestion of John Herschel

When astronomer John Herschel received news of Neptune’s discovery, he wrote to William Lassell suggesting to search for possible moons.[6] Lassell did so and subsequently discovered Triton eight days later. Lassell also claimed to have discovered rings. Although Neptune was later confirmed to have rings, they are so faint and dark that it is doubtful that he actually saw them. 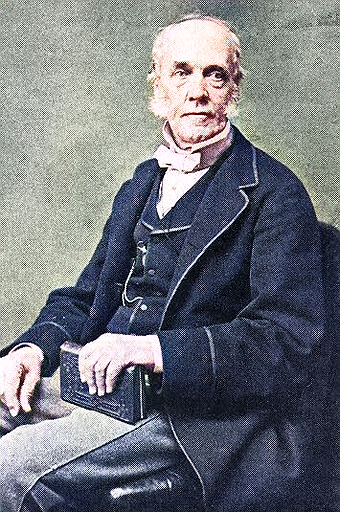 Triton is named after the Greek sea god Triton, the son of Poseidon. The name was first proposed by Camille Flammarion in his 1880 book Astronomie Populaire, and was officially adopted many decades later. Until the discovery of Neptune’s second moon Nereid in 1949, Triton was commonly referred to as “the satellite of Neptune”. Lassell did not name his own discovery. He later successfully suggested the name Hyperion, previously chosen by John Herschel, for the eighth moon of Saturn when he discovered it.

Moons in retrograde orbits cannot form in the same region of the solar nebula as the planets they orbit, so Triton must have been captured from elsewhere. It might therefore have originated in the Kuiper belt, a ring of small icy objects extending outwards from just inside the orbit of Neptune to about 50 AU from the Sun. Triton’s axis of rotation is also unusual, tilted 157 degrees with respect to Neptune’s axis (which is in turn inclined 30 degrees from the plane of Neptune’s orbit). This adds up to an orientation with respect to the Sun somewhat like Uranus’s with polar and equatorial regions alternately pointing toward the Sun. This probably results in radical seasonal changes as one pole then the other moves into the sunlight.[4]

The orbital properties of Triton were already determined with high accuracy in the 19th century. It was found to have a retrograde orbit, at a very high angle of inclination to the plane of Neptune’s orbit. The first detailed observations of Triton were not made until 1930. Little was known about the satellite until Voyager 2 arrived in 1989 and passed at a distance of 40,000 km. The 40% of Triton’s surface imaged by Voyager 2 revealed blocky outcrops, ridges, troughs, furrows, hollows, plateaus, icy plains and few craters. Triton is relatively flat; its observed topography never varies beyond a kilometer. There are relatively few impact craters on Triton. The first attempt to measure the diameter of Triton was made by Gerard Kuiper in 1954. He obtained a value of 3,800 km. Subsequent measurement attempts arrived at values ranging from 2,500 to 6,000 km, or from slightly smaller than the Moon (3474.2 km) to nearly half the diameter of Earth. Data from the approach of Voyager 2 to Neptune on August 25, 1989, led to a more accurate estimate of Triton’s diameter (2,706 km).