You are here: Home › physics › Pieter Zeeman and the Zeeman Effect 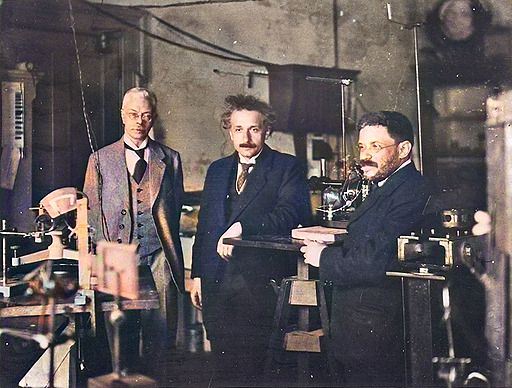 Pieter Zeeman (left) together with Albert Einstein and Paul Ehrenfest

On October 9, 1943, Dutch physicist Pieter Zeeman passed away. Zeeman shared the 1902 Nobel Prize in Physics with Hendrik Lorentz for his discovery of the Zeeman effect, the effect of splitting a spectral line into several components in the presence of a static magnetic field.

Pieter Zeeman was born on 25 May 1865 in Zonnemaire, a small town on the island of Schouwen-Duiveland, Netherlands, to Catharinus Forandinus Zeeman, a minister of the Dutch Reformed Church, and Willemina Worst. He witnessed the Aurora borealis in the Netherlands during 1883 and created a drawing of the phenomenon which was published in Nature. During the same year, Zeeman finished highschool and moved to Delft to study classical languages. Zeeman passed the university qualification exams in 1885 and began to study physics at Leiden under Kamerlingh Onnes [4] and Hendrik Lorentz. In 1890, Zeeman became Lorentz’s assistant and began researching on the Kerr effect, which describes the changes to light reflected from a magnetized surface. Zeeman submitted his thesis on the topic three years later.

After a short period in Strasbourg, where he worked in the laboratory of Friedrich Kohlrausch, Pieter Zeeman became Privatdozent in mathematics and physics at Leiden. In 1897 Zeeman moved to the University of Amsterdam, where he received a full professorship in 1900 and remained until his retirement in 1935.

Picture of the Zeeman Effect

Zeeman became known through the discovery of the Zeeman effect named after him. It is believed that in 1896, Pieter Zeeman used laboratory equipment to measure the splitting of spectral lines by a strong magnetic field against the orders of his supervisor. While at the time, Zeeman was fired for his actions he was later vindicated.  As early as 1895, Hendrik Lorentz assumed on the basis of his electron theory that under the influence of an external magnetic field on the atom, the energy levels of the electrons split the atomic shell and thus the spectral lines. This theory was subsequently studied in detail by Zeeman. In the autumn of 1896, Zeeman began his corresponding experimental investigations.

He improved his apparatus with regard to the strength of the magnets and the resolution of his spectroscope and was able to confirm Lorentz’ predictions of the splitting into a doublet and a triplet on the basis of the blue-green line in the spectrum of cadmium. On October 31, 1896, he submitted the first of his five papers to the Amsterdam Academy, in which he explained that the spectral lines of a light source split into several polarized components in a strong magnetic field. Through this phenomenon, known as the Zeeman effect, he confirmed the electron theory of the interaction of light and matter of his teacher Lorentz.

The Nobel Prize and other Honors

It is believed that Hendrik Lorentz first heard of Zeeman’s results at the meeting of the Royal Netherlands Academy of Arts and Sciences in Amsterdam in 1896. He then called Zeeman into his office and presented him with an explanation of his observations, based on Lorentz’s theory of electromagnetic radiation. In 1902, he was awarded together with Hendrik Lorentz the Nobel Prize in Physics for the discovery of what has now become known as the Zeeman effect.

Zeeman’s discovery confirmed Lorentz’s prediction about the polarization of light emitted in the presence of a magnetic field. Thanks to his work it became clear that the oscillating particles that according to Lorentz were the source of light emission were negatively charged, and were a thousandfold lighter than the hydrogen atom. The Zeeman effect became an important tool for elucidating the structure of the atom.