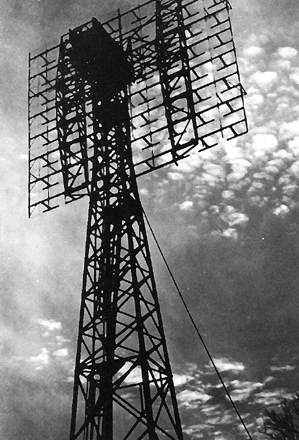 On January 10, 1946 the U.S. Army Project Diana team detected radar signals reflected off the moon‘s surface. This was the first experiment in radar astronomy and the first active attempt to probe another celestial body.

Project Diana was designed in order to bounce radar signals off the Moon and receive the reflected signals, which became the first known attempt to probe another celestial body. Pioneer of the project was  John H. DeWitt. DeWitt attended Vanderbilt University Engineering School for two years but dropped out to work in broadcasting and amateur radio. He built Nashville’s first broadcasting station and in 1929 joined the Bell Telephone Laboratories technical staff in New York City, where he designed radio broadcasting transmitters. DeWitt later returned to Nashville in order to become Chief Engineer of radio station WSM. Inspired by Karl Jansky‘s discovery of “cosmic noise,”[3] DeWitt built a radio telescope and searched for radio signals from the Milky Way.

DeWitt attempted to bounce radio signals off the Moon in order to study the Earth’s atmosphere starting from 1940. However, due to insufficient receiver sensitivity the attempt failed. Project Diana received its name in 1945 and in September of the same year DeWitt began to assemble his team including Dr. Harold D. Webb, Herbert P. Kauffman, E. King Stodola, and Jack Mofenson, and Walter S. McAfee who calculated the reflectivity coefficient of the Moon.

In order to be able to reflect signals from the Moon, a large transmitter, receiver and antenna array were constructed at a laboratory at Fort Monmouth in New Jersey. The transmitter was a modified SCR-271 radar set from the Second World War and provided 3 kilowatts (later 50 kilowatts) at 111.5 MHz in  1⁄4-second pulses, applied to a bedspring reflective array antenna. The reflected signals were received about 2.5 seconds later, the time required for the radio waves to make the 768,000-kilometre round-trip journey from the Earth to the Moon and back. The first successful echo detection came on 10 January 1946 at 11:58am local time by John H. DeWitt and his chief scientist E. King Stodola. 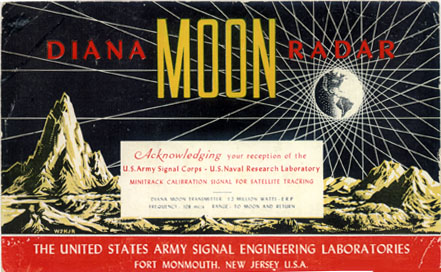 The Birth of Radio Astronomy

Due to the Moon’s orbital motion relative to the Earth’s surface which was also different each day, the receiver had to compensate for the Doppler shift in frequency of the reflected signal. The antenna could be rotated in azimuth only, so the attempt could be made only as the moon passed through the 15 degree wide beam at moonrise and moonset, as the antenna’s elevation angle was horizontal. About 40 minutes of observation was available on each pass as the Moon transited the various lobes of the antenna pattern. 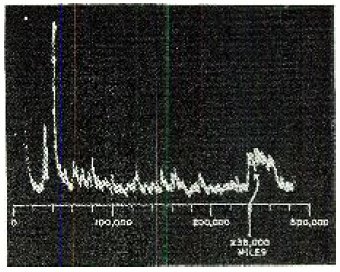 Oscilloscope display showing the radar signal.[8] The large pulse on the left is the transmitted signal, the small pulse on the right is the return signal from the Moon. The horizontal axis is time, but is calibrated in miles. It can be seen that the measured range is 238,000 mi (383,000 km), the distance from the Earth to the Moon.

Woody Sullivan :: “The Beginnings of Radio Astronomy around the World“, [6]