You are here: Home › medical science › Hieronymus Fabricius – The Father of Embryology 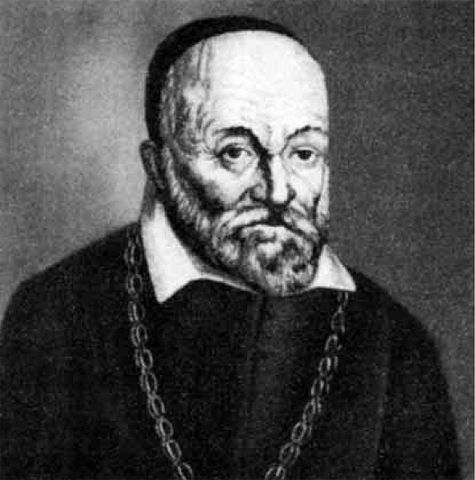 On May 20, 1533 Hieronymus Fabricius or Girolamo Fabrizio or by his Latin name Fabricus ab Aquapendente also Girolamo Fabrizi d’Acquapendente was born. He was a pioneering anatomist and surgeon known in medical science as “The Father of Embryology.”

Girolamo Fabrizio was born probably on May 20, 1537 in Aucula. He was sent to Padua in order to receive a decent education and studied Greek as well as Latin and philosophy from the beginning. Later on, the young man engaged in the study of medical sciences and graduated with honor. Next, Hieronymus Fabricius devoted his interest to surgery and anatomy. He was appointed private lecturer of anatomy at the University of Padua and in 1565, became professor of surgery and anatomy at the university, succeeding Gabriele Falloppio. It is believed that he designed the first permanent theater for public anatomical dissections and among his students were Julius Casserius of Piacenza would later succeed Fabricius as Professor of Anatomy at the University of Padua in 1604. Also, William Harvey, and Adrian van den Spiegel studied under Fabricius, beginning around 1598. William Harvey probably was his most famous student, who was the first European doctor to describe blood circulation and further develop Fabrizio’s idea of embryogenesis.[4]

Fabricius investigated the formation of the fetus on animals. His most important work on the topic is titled ‘De formatu foetu‘ and in it, Fabricius compared the fetus of different kinds of animals. It is believed that his studies concerning chicken embryos are the most detailed ones. Another embryological treatise by Fabricius was titled ‘De formatione ovi et pulli‘ (On the Formation of the Egg and of the Chick) and it was published posthumously in 1621. Both works contained impressive illustrations depicting the uterus and comparative studies of the fetuses in dogs, cats, mice, rabbits, goats, guinea pigs, sheep, cows, horses, pigs, birds, sharks, and humans. Although his works in anatomy reflect some incorrect assumptions of the time, Fabricius is considered to be the first to study and illustrate the decidua of the human uterus. Also, Hieronymus Fabricius also gave lectures and performed many anatomical demonstrations, dissecting the uterus and placenta of a pregnant woman in 1586. He began lectures on the formation of the fetus in 1589 and provided private lessons on the subject of embryology in 1592. 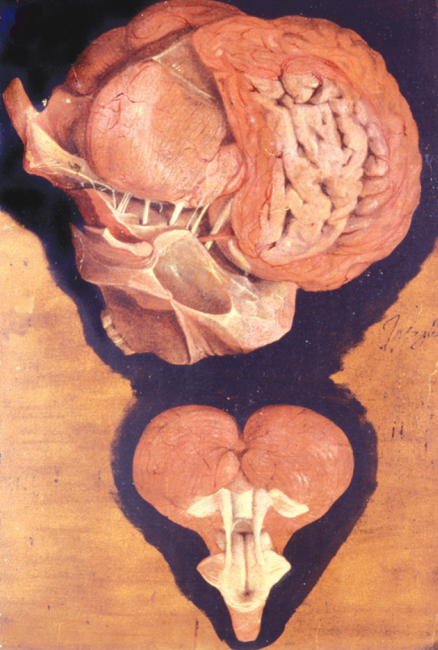 The 1600 depiction of the sylvian fissure (in top right side) in Fabricius’s Tabulae Pictae 112.10

Hieronymus Fabricius also researched the structure of the esophagus, stomach and intestines, and the peculiarities of the eye, the ear, and the larynx. Hieronymus Fabricius was possibly the first to describe membranous folds that he called “valves” in the interior of veins. However, back then Fabricius did not know that these ‘valves’ are now understood to prevent retrograde flow of blood within the veins, thus facilitating antegrade flow of blood towards the heart.

Hieronymus Fabricius’s ‘Tabulae Pictae‘ was first published in 1600. In it, the author described the cerebral fissure separating the temporal lobe from the frontal lobe. Unfortunately, his discovery was not recognized until recently. The Danish anatomist Caspar Bartholin credits Franciscus Sylvius with the discovery, and Bartholin’s son Thomas named it the Sylvian fissure in the 1641 edition of the textbook Institutiones anatomicae.[3] Also, it is believed that Fabricius significantly contributed to the field of surgery.

Though he never actually performed a tracheotomy, his writings include descriptions of the surgical technique. He favored using a vertical incision and was the first to introduce the idea of a tracheostomy tube. This was a straight, short cannula that incorporated wings to prevent the tube from disappearing into the trachea. He recommended the operation only as a last resort, to be used in cases of airway obstruction by foreign bodies or secretions. Fabricius’ description of the tracheotomy procedure is similar to that used today. Julius Casserius published his own writings regarding technique and equipment for tracheotomy. Casserius recommended using a curved silver tube with several holes in it. Marco Aurelio Severino (1580–1656), a skilful surgeon and anatomist, performed at least one tracheotomy during a diphtheria epidemic in Naples in 1610, using the vertical incision technique recommended by Fabricius.